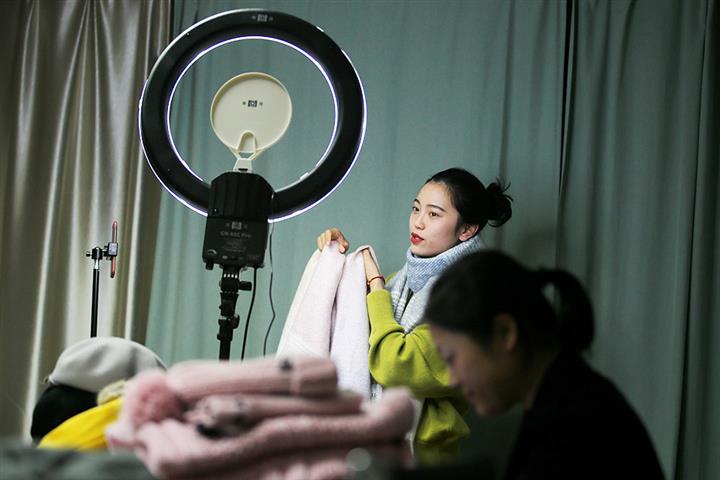 (Yicai Global) April 23 -- Shanghai has become a major force behind the adoption of e-commerce live-streaming in China as Covid-19 alters the way many consumers opt to purchase, according to the official data platform under Alibaba Group Holding’s Taobao.

More presenters are based in Shanghai than any other city nationwide, TBD said in a report. The city’s municipal government announced on April 13 that it would encourage new broadcast formats and the use of social networks and communities in e-commerce, such as WeChat, until 2022.

Covid-19 has had a major impact on the real economy and highlighted the advantages of the digital world, said Liu Changwu, founder of Shanghai Weixi Commerce and Trade. Live-streaming should surge once Shanghai gets its support plan in place, he added.

Live-streaming emerged as a trend for online sales in 2016 and has outperformed many other marketing methods, such as images and text, in terms of engaging users for a longer period of time, TBD said. It also draws in more potential buyers and has a higher conversation rate, which is attracting merchants and governments alike.

Presenters can earn anywhere between 10 percent and 30 percent of sales as commission from retailers, and tens of thousands of broadcasters are online selling clothes, bags and other items to fans on Taobao, Mogujie, Kuaishou and other platforms every day.

Around 524 million viewers spent CNY433.8 billion (USD61.3 billion) in live-streaming e-commerce last year, according to projections from new economy specialist iiMedia Research, which pegs the sector at a value of CNY900 billion.

The movement has produced a host of new jobs. Hiring a month after China got back to work following the Chinese New Year holiday more than doubled in the sector, despite an overall decline of 28.1 percent due to Covid-19, according to jobs platform Zhaopin.