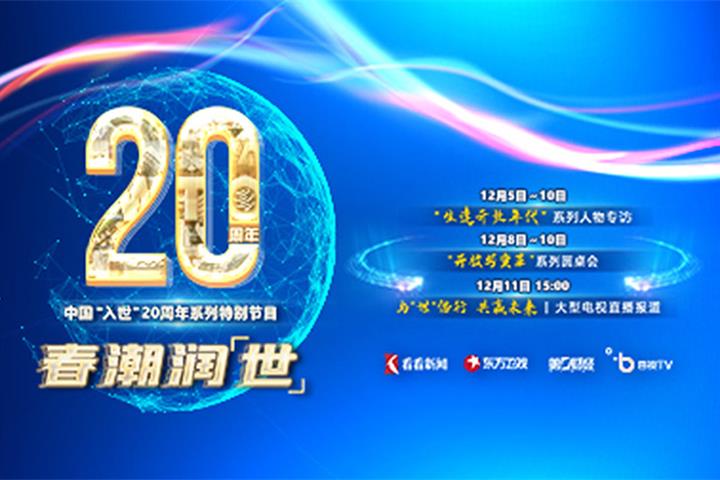 (Yicai Global) Dec. 9 -- Three networks under the Shanghai Media Group are launching a special television series to celebrate the 20th anniversary of China’s accession to the World Trade Organization.

Dragon Television, a mainstream satellite television station, is holding a three-day event this week called ‘Opening-Up and Reforms, Serial Roundtable Talks about the 20th Anniversary of China’s Accession to the WTO.’ It will be broadcast nationwide during prime time and simultaneously livestreamed to the world through SMG’s Knews news network and financial media channel Yicai Media Group.

The series will chronicle the many achievements that China has made in the last two decades, its positive contributions to the healthy development of the global economy and other profound influences that it has brought to the world.

Academic experts and business leaders from home and abroad will feature. These include Yi Xiaozhun, China’s former minister of vice commerce and exdeputy director-general of the WTO, Zhou Hanmin, vice chairman of the Shanghai Committee of the Chinese People’s Political Consultative Conference, Pascal Lamy, former director-general of the WTO, Tao Lin, vice president at Tesla China and Craig Allen, president of the US-China Business Council.

They will also discuss how China should actively participate in the global multi-lateral trade system, promote reform of the WTO and put the concept of a Community of Shared Future for Mankind into practice to better address today’s global economic challenges.

Other special guests include Zhang Yuejiao, the first Chinese judge of the WTO, Wei Ya, the online influencer who sold a USD570 million rocket online, Wang Junjin, chairman of Shanghai Juneyao Group, the first company in China to offer private plane charter services and Wu Xiaoru, president of AI giant iFlytek. They will tell stories about their personal and their businesses’ achievements in the last 20 years.

During the livestream, journalists from Dragon TV and Yicai will report from prime worldwide locations, including the Long Beach pier in New York, the London Stock Exchange, the WTO headquarters in Geneva and the Hong Kong Stock Exchange to demonstrate how China has made ‘Chinese contributions’ to global development since it joined the WTO.