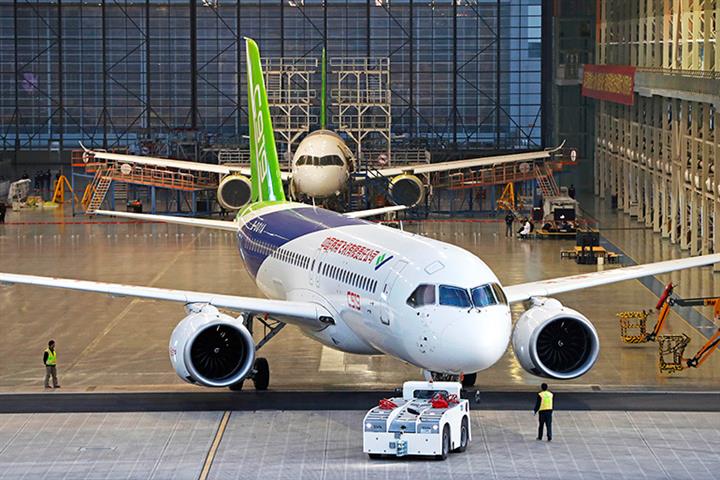 (Yicai Global) Nov. 11 -- Pudong New Area, on the bank of Shanghai’s Huangpu River, is known as an industrial base for ships and aircraft, but it is also home to a growing number of advanced manufacturing companies. Innovative businesses in Pudong are making chips, drugs and new-energy vehicles and this will be the area’s main direction in the future.

Key industries are being promoted in Pudong with government funding of CNY100 billion (USD15.1 billion). “We are focusing on making breakthroughs, especially in the three strategically contested fields -- integrated circuits, AI and biomedicine,” Hang Yingwei, deputy secretary-general of the Shanghai municipal government and head of Pudong New Area, told reporters at the 30th anniversary celebrations of the area’s development and opening-up.

For example, the industrial scale of artificial intelligence companies in Pudong is expected to be close to CNY100 billion (USD15.1 billion) this year.

The Microsoft AI & IoT Insider Labs built by Microsoft and Zhangjiang Group started operating in Pudong in May last year. This is Microsoft's fourth and largest AI and IoT laboratory so far.

The number of AI business in Pudong will exceed 100 by next month, and more than 7,000 researchers will work there, according to Zhangjiang Group President Yuan Tao.

At Commercial Aircraft Corporation of China’s production base in Pudong, Zheng Dayong, COMAC Shanghai’s deputy general manager, told Yicai Global that the firm’s C919 large passenger aircraft is a short- and medium-range narrow-body passenger plane with its own intellectual property rights. Development started in 2008 and the aircraft completed its first flight in 2017.

The Shanghai Integrated Circuit Design Industrial Park opened in April. More than 180 chipmakers have gathered there, and the park is expected to achieve revenue of CNY100 billion by 2025.

He Dajun, general manager of Shanghai Zhangjiang Hi-Tech Park Development, said the focus should be on small enterprises as well as large ones. “Don’t underestimate the innovation capabilities of SMEs," he said.