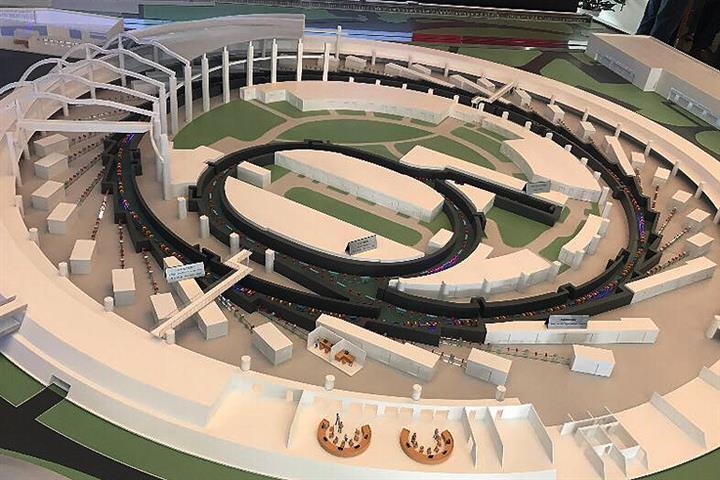 (Yicai Global) Nov. 9 -- Promoting innovation is an important task for Shanghai to build itself into a science and technology innovation center with global influence, amid a new round of scientific and technological revolution and industrial transformation.

With a series of major scientific research platforms, including the Shanghai Synchrotron Radiation Facility and the Shanghai Supercomputer Center, and multiple colleges and research institutes, Pudong New Area is the core of this sci-tech invention hub.

At a recent briefing held on the 30th anniversary of the opening-up and development of Pudong, Hang Yingwei, the district chief of the new area, told reporters that Pudong is leading construction of the sci-tech innovation center in Shanghai with its Zhangjiang Science City.

The Shanghai Synchrotron Radiation Facility is homed in a building that resembles a nautilus shell in Pudong’s Zhangjiang area. Thanks to the SSRF, some analysis that could not be done or had to be done abroad can now be finished “in front of the house,” according to Prof. Ma Ding of Peking University.

As one of the world’s leading third-generation medium energy synchrotron radiation facilities, the SSRF enabled Chinese biologists who used to rely mainly on foreign synchrotron radiation equipment to carry out research in frontier fields. They have now achieved a number of important results with global impact in the study of protein structures and functions related to epidemic viruses such as avian influenza, Ebola and Zika.

Science researchers are undoubtedly the most critical element in building a sci-tech innovation system.

The Pudong International Talent Harbor was opened in April last year. A service platform was launched at the same time in the Shanghai Free Trade Zone for foreigners to work in China. Foreigners only need to go to a single window to apply for work and residence permits. The approval process has also become much more efficient, with the approvals process taking just five days.

Pudong has introduced a series of pioneering and breakthrough talent policies in recent years, including relaxing direct employment restrictions for foreign graduates, taking the lead in exploring the development of offshore innovation and entrepreneurship bases for overseas talents in the FTZ, and building an internationally competitive talent pool, Hang said.