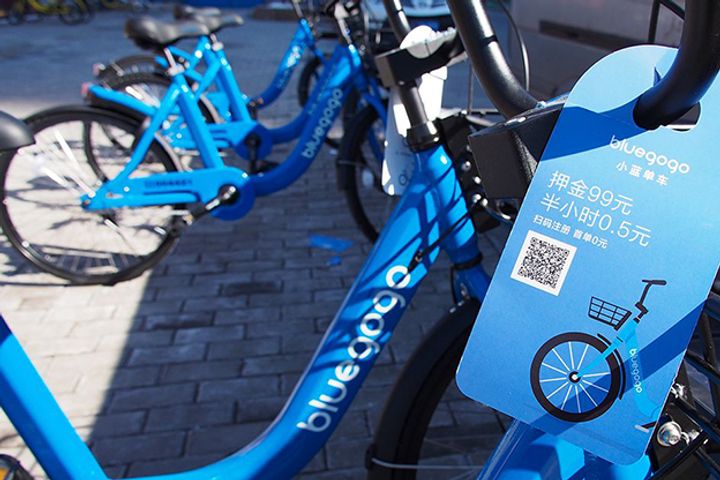 The regulator has already discussed the deposit issue as well as problems related to maintenance directly with Didi Chuxing several times, requiring the Beijing-based company to resolve them in accordance with local regulatory requirements.

Didi launched its new bike-sharing platform, which lists Bluegogo next to Didi-backed rival brand Ofo, in Beijing and Shenzhen last week, and plans to also restart operations in other cities later, as part of Didi's expansion from ride-hailing into the shared-bicycles.

The move comes amid strained relations between the leadership of Beijing Bikelock Technology Co., the company behind Ofo, and Didi Chuxing, the startup's main investor. Ofo founder Dai Wei scuppered recent talks aimed at a Didi-backed merger with its archrival Beijing Mobike Technology Co. In retaliation, Didi has refused to sign off on a deal to inject USD1 billion from Alibaba Group Holding Ltd. into Ofo, which is burning through cash every month as it slugs it out with Mobike.

When it went bankrupt at the end of last year, Bluegogo was the country's number three player in the sector after Ofo and Mobike. Bluegogo had deployed about 700,000 bicycles and had 10 million users before it ran into a severe cash and management crisis and was unable to refund user deposits and pay staff wages.

Under Didi's trusteeship, Bluegogo user deposits, privilege cards and account top-ups will be converted into Didi bicycle and travel coupons of equal value.

Early this year, Didi Chuxing announced that it has taken over Bluegogo's business and said that Bluegogo's users can switch their consumption, including deposit, privilege card and top-up balance, to the same amount of Didi Chuxing's vouchers.