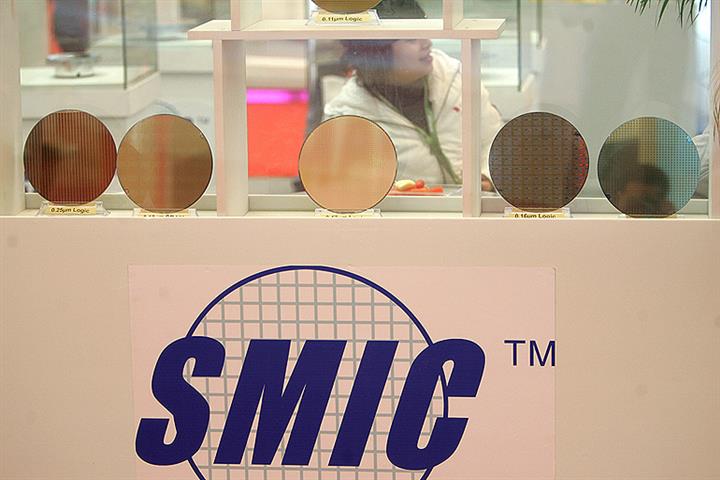 (Yicai Global) May 14 -- Shares in Semiconductor Manufacturing International surged today after the foundry, China’s largest, posted a new quarterly revenue record in the first three months despite Covid-19 sweeping across the globe.

Revenue rose 35.3 percent annually and 7.8 percent on the quarter to USD905 million, SMIC said yesterday in its financial report for January through March. Profit more than quintupled on the year to USD64.2 billion with gross margins of 25.8 percent, up from 18.2 percent a year earlier and 23.8 percent in the previous quarter.

Revenue will likely increase again this quarter, by about 3 percent and 5 percent, with gross margins edging above 26 percent, the firm predicts.

SMIC co-Chief Executives Zhao Haijun and Liang Mong Song are confident they can maintain growth momentum despite the ongoing uncertainty by providing comprehensive technology and business platform solutions for domestic and global customers, according to the press release accompanying the report.

The firm is leveraging its mature output capacity and demand for products using its wafers, like cameras and fingerprint recognition components, is strong, it added. The company is making smooth research progress and plans to expand in the communications, automotive and consumer electronics sectors.

It will also increase capital expenditure by USD1.1 billion to USD4.3 billion, the report said, with most of it going toward 300 millimeter fabrication equipment in Shanghai. Its first-quarter capital spending was USD777 million, up from USD491 million in the quarter prior.

By region, 61.6 percent of sales came from the Chinese mainland and Hong Kong, up 7.7 percentage points annually. US buyers made up 25.5 percent, down 6.8 points.