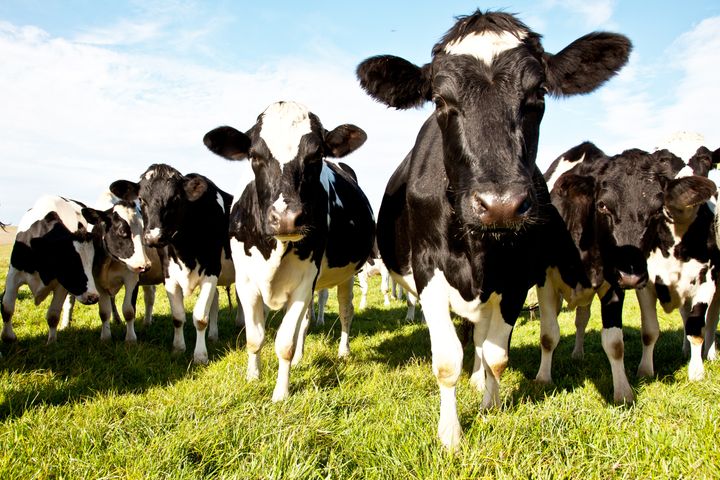 Taking the Gas Out of Cows

A Swiss company has developed a feed additive for cattle that reduces greenhouse gas emissions while improving milk yields.

(Yicai Global) Dec. 3 -- One rainy day last August, three cows were standing in a Swiss field, peacefully grazing and occasionally belching, contributing to climate change with every burp. Next door, in a plain grey industrial building, a Swiss SME was busily making a feed additive for dairy cows. The compound, Agolin Ruminant, increases cows' milk yield while reducing the amount of methane they release into the air.

"It's a digestive enhancer that enables the cow to make better use of the feed it ingests," said Agolin's CEO, Kurt Schaller. After working for 20 years in the feed additive industry, he co-founded the company in 2006 with animal nutritionist Beatrice Zweifel and investor Pierre-Henri Jacquet. Their flagship product is a natural blend of cloves, wild carrot and coriander oil extract.

Based in Bière, a small village 40 km from Geneva, the company sells Agolin Ruminant around the world. Its primary market is Europe, where they supply it to around one million cows. This year, both the Solar Impulse Foundation and the Carbon Trust have recognized Agolin for its efforts to improve sustainability and mitigate climate change.

According to the Food and Agriculture Organization (FAO), dairy and beef cattle release nearly 10 percent of human-induced greenhouse gases into the atmosphere. "Every ruminant produces methane through the fiber fermentation in digestion," explained Florian Leiber, head of Livestock Sciences at the Swiss Research Institute of Organic Agriculture. A single cow can release more than 100 kg of methane per year, mostly through belching—that's roughly equivalent to two tonnes of CO2, or two round-trip flights between Paris and New York.

While experts agree that the most effective solution to this environmental issue would be to reduce our consumption of livestock products, hundreds of millions of people around the planet still rely on such products for their food or livelihood. And with populations soaring, their demand is expected to rise by 70 percent in the next three decades. "That is why we weren't looking for a methane reduction effect at first," said Zweifel, "but rather a way to improve dairy cows' milk yield with the same amount of feed intake."

The company's initial goal was to enhance feed efficiency by using active substances from plants and essential oils, traditional know-how that has been largely replaced by antibiotics and chemicals. Agolin's research trials—conducted independently by the Institute for Agriculture and Fisheries Research in Belgium, Aberystwyth University in Wales, the French National Institute of Agricultural Research (INRA) and the University of California—showed that their mixture had a considerable effect on rumen bacteria, which help cows to digest. It improved the animal's milk yield by up to seven percent. At the same time, it reduced enteric methane production by an average of 10 percent (results can vary with feeding systems).

Other feed additives can reduce cattle's methane emissions, but few of them are 100 percent natural. One option, linseed oil, needs to be "used at a much higher dosage," said Zweifel, noting that adding Agolin Ruminant to a cow's diet costs around four cents per day, increasing farmers' incomes in a climate-friendly manner.

Agolin was originally financed with its founders' personal savings and an economic development loan from the Swiss government. Conducting research trials is a slow process, so it took three years for the company to break even, and three more to become profitable. Today, Agolin has more than 100 industrial clients worldwide and a network of 25 distributors. Chris Miller, technical manager at Gain Animal Nutrition, Ireland's largest feed brand, said that adding the compound to its product has improved his clients' milk production by up to two liters per cow per day.

The company's turnover was nearly USD 10 million in 2017. "That is roughly 250,000 tonnes of C02-equivalent saved each year," said Schaller. "If we managed to feed every cow in the world with this, the potential for CO2-equivalent mitigation could rise to 300 million tonnes per year."

However, the product's scope remains limited by the fact that it can only be used in intensive farming, since it must be mixed into compound feeds and minerals, rather than fed directly to cows. "It's virtually impossible to reach a massive-scale use of additives because the vast majority of ruminants do not have access to this kind of feed every day," explained Diego Morgavi, senior researcher at INRA's department of animal physiology and livestock systems. In extensive farming, which uses traditional methods, cattle feed mostly on grass.

Since 2014, Agolin has been working on a project called RuMeClean, hoping to include Agolin Ruminant in the European Union's private and public carbon offset programs. But while legislation could increase Agolin's reach, its CEO believes that private companies will lead the way in creating a more sustainable livestock industry. "There's a big gap between the world's governments' environmental ambitions and their actions," Schaller noted. "Industry is much faster, and will be the first to move forward."