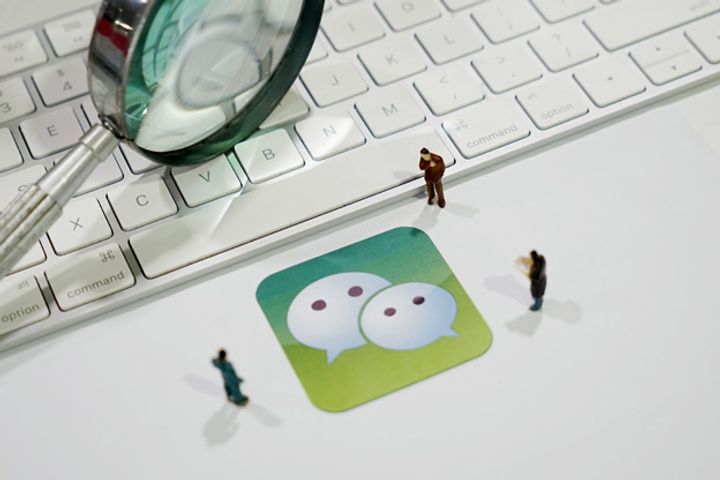 (Yicai Global) Jan. 16 -- Tencent  Holdings has blocked the function of sharing links between its flagship  platform WeChat and three new rivaling releases as competition heats up  in the world's largest social media market.

Duoshan,  a Snapchat-like short video platform from Bytedance, Ringle  Technology's Quora-like Matong MT and Kuairu Technology-owned messenger  app Liaotianbao, were all launched yesterday, but their users were  unable to share links to content on these apps via WeChat. China's  biggest social media platform has not officially commented on the  restriction.

"I wonder what  scares you [Tencent]?," Wang Xin, the founder of Shenzhen's Ringle  Technology, posted on his microblogging account Weibo.

"We  found [that our products] had already been blocked on WeChat just  before the event was open, and we are uncomfortable with that," TechNode  reported, citing Luo Yonghao, the founder of Kuairu Technology,  speaking at Liaotianbao's launch event in its home city Beijing. "We  wanted to say hello to WeChat, but obviously they don't want that."

Duoshan  and WeChat don't belong to the same category, Chen Lin, the chief  executive of Bytedance's news aggregator Toutiao said. WeChat is like an  infrastructure provider, while Duoshan only cares about interaction  between close friends, Chen added. Videos shared on the Beijing-based  firm's Duoshan disappear in 72 hours. WeChat released a stories function  in December where videos will vanish in 24 hours.

"WeChat  is like the sea, while the rest is just waves," Gu Xiaobin, an  executive at LinkSure Network told Yicai Global. It is difficult for  latecomers to win, NetEase Executive Jiang Hanyu told Yicai Global. Over  1 billion users sign into their WeChat accounts daily as of August last  year, data from the Shenzhen-based company show.

However,  the nature of online success is unpredictable. Taobao, JD.Com and other  e-commerce giants did not foresee the emergence of bulk-buy platform  Pinduoduo two years ago, as the latter snatched market shares in third-  and fourth-tier cities by offering more tailored services, Jiang said.

"The  number of WeChat users is close to the ceiling," China Channel founder  Matthew Brennan said. "WeChat is in a defensive status for many aspects,  because the platform is very mature."

A  successful product just happens to be successful, which is not due to  the creator's luck, but the product's capability of retaining traffic,  Zhang Xiaolong, the creator of WeChat, posted on his personal social  media account. "Warlike is the nature of humanity, all teams and  products must have an enemy to boost spirits, even of it is an imaginary  one," Zhang added.