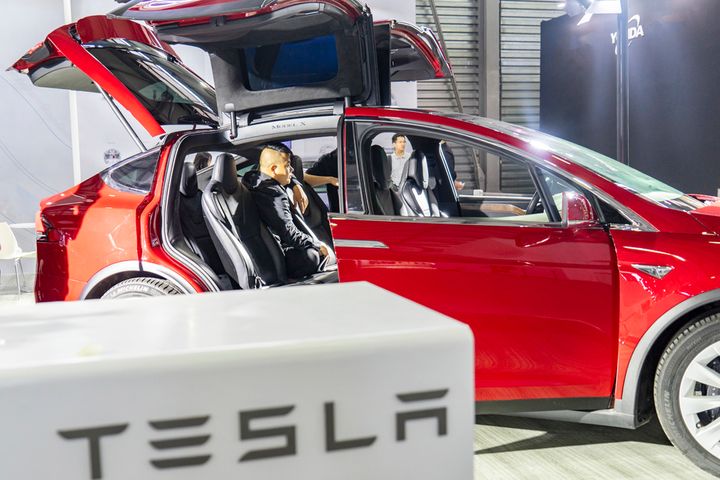 (Yicai Global) Feb. 21 -- Tesla's revenue in China slumped by 13.3 percent last year, contrasting a 90 percent gain in 2017 as the effects of the China-United States trade tiff weighed in on the electric carmaker's prices.

The California-based firm collected USD1.76 billion in its second-largest market behind the US, it said in a filing to the US Securities and Exchange Commission yesterday. Its global income nearly doubled.

China-US trade frictions undoubtedly affected Tesla's sales in the country, industry analyst Mei Songlin told Yicai Global. China hit Tesla with a 40 percent import tax in July 2018, sending prices soaring before it was brought back down to 15 percent -- though it might be about to rise again.

US President Donald Trump and Chinese President Xi Jinping agreed at the G20 meeting late last year that neither Beijing nor Washington would further the intensity of their existing tariff's on each other's goods, but that pact is due to expire on March 1.

This is a catalyst for Tesla to get its Shanghai factory up and running so it can benefit from the lower costs of local production, Mei added, pointing out that domestic competitors also stepped up their game last year and won over potential customers in the electric car segment.

One of those is Nio. The Shanghai-based new-energy vehicle maker delivered 11,348 cars in 2018, closing in on Tesla's combined 13,627 Model S and Model X sales. The local firm's ES8 also came out trumps in its home city and Beijing -- China's two biggest NEV markets. The ES8 sold 1,566 units in Shanghai and 2,133 units in the capital, outshining both the Model S and Model X in terms of individual vehicle sales.

There is going to be even more pressure this year as emerging domestic firms unveil more new vehicles, Mei said. But there is the possibility that China-US trade negotiations will prove favorable and allow it to lower costs before it achieves local production, he added, saying the firm should begin to look at developing in second- and third-tier cities once it can bring its prices down.