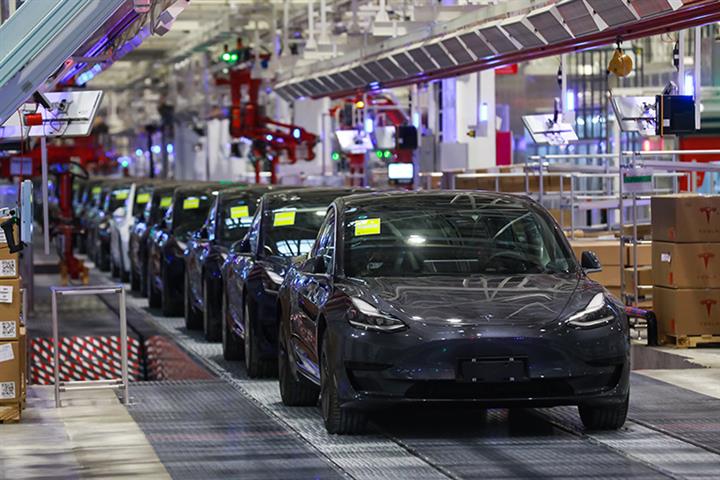 (Yicai Global) April 27 -- Tesla posted record quarterly profit for the first three months of this year thanks to strong demand in China, where the US automaker sells about a thirdof its electric vehicles.

Net profit gained 27-fold toUSD438 million in the three months ended March 31 from a year earlier, the firm said in an earnings report released after the market closed yesterday. It has now made a profit in each of the past seven quarters. Operating income jumped 74 percent to USD10.39 billion.

Boosted by robust demand from Chinese buyers, California-based Tesla delivered 184,800 Model 3s and Model Ys in the quarter, while its total deliveries doubled to a record high.

But it did not produce any high-end Model S or Model X in the period, delivering just 2,020 older models in stock. That led to a 13 percent drop in the average price of a Tesla vehicle, hurting profits.

Tesla is expanding its local supply chain in China to enhance manufacturing capacity. The company has opened a charging pile production plant in Shanghai. Its EV battery materials are recyclable, Tesla said on its website.

The proportion of car parts and components made in China has recently increased to more than 90 percent at its Shanghai plant, its first assembly line outside of the United States. Exports to Europe and the Asia-Pacific region will continue as scheduled, the firm said.

The production of China-made Model Ys is progressing well, it added. Annual production capacity in Shanghai is 450,000 vehicles, and quarterly output will increase further this year.

Tesla expects deliveries to jump more than 50 percent this year, meaning at least 750,000 units, and it is expected to start production and delivery at its new plants in Texas and Berlin.

Despite its robust earnings performance, Tesla’s shares [NASDAQ:TSLA] fell as much as 3 percent in after-hours trading in New york. Yesterday, the stock rose 1.2 percent to USD738.20.