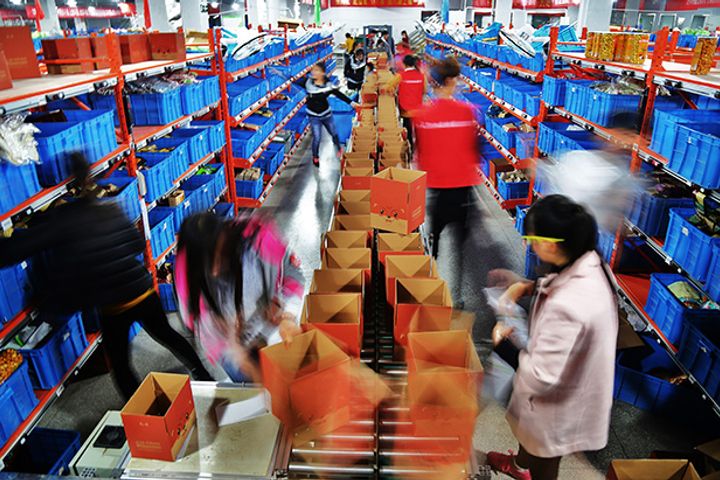 The Evolution of China's Delivery Sector Has Fueled Double 11 Success

(Yicai Global) Nov. 12 -- Gross merchandise volume during the Tmall Double 11 shopping festival crossed the CNY10 billion (USD1.4 billion) mark a mere two minutes and five seconds after opening on midnight Nov. 11. While consumers can expect to start to received deliveries this week, courier firms are limbering up to embrace a flood of goods placing tremendous pressure on their logistic systems.

Orders exceeded 700 million as of 12.01 p.m. yesterday, according to the latest data from Alibaba's logistics platform Cainiao. Orders surpassed the 657 million recorded during the 24 hours at Double 11 2016 and hit the same level as last year more than eight hours earlier.

However, consumers are receiving their orders faster and faster and logistics delays associated with the annual event are becoming a thing of the past.

For this year, packages have already been signed for by customers in 263 cities in China (including Hong Kong, Macao and Taiwan). Among which, consumers in Shanghai, Suzhou, Beijing, Chongqing and Shenyang received the most packages.

The transformation of the logistics sector from a focus on intensive labor and extensive operations to digital and intelligent application has contributed to the evolution of the industry.

Cainiao jointly built a robotic distribution center in its home city of Zhejiang with courier YTO Express where 350 robots work around the clock in the 2,000 square area centers, sorting more than half a million packages a day.

Such an achievement would have been hard to imagine a decade ago. At that time, manual operations prevailed in both distribution and transit warehouses, and rough handling of packages was once a key criticism of services on offer.

"Depending on extensive resources and the labor force is no longer feasible during Double 11, and technology and innovation are the solutions," Sun Jian, deputy director of the Cainiao's Double 11 project told Yicai Global. There have been many other attempts to utilize digital intelligence to help the express industry improve efficiency, including early warning systems for logistics providing forecasts and alerts during peak seasons, along with intelligent express routing allowing accurate sorting, which improves operating efficiency.

In recent years, Cainiao has been forecasting sales and buyers to facilitate the movement of highly popular products to the nearest warehouse in advance through data analysis and intelligent algorithms.

"We have done lots of data analysis and prediction with partners in advance, which have been key to cutting logistics delays," Sun said, adding that these can forecast how many orders are expected on different routes and how many vehicles should be prepared.

Just before this year's Double 11, Cainiao and courier partners announced the official launch of a video cloud monitoring system, using millions of cameras in various logistics stations across the country to use smart sensor devices to provide simple monitoring and backtracking facilities. These are capable of identifying if parking spaces are free, whether unloading and loading are operating as expected and whether the transport corridors are blocked.

Ten years ago, logistics and delivery were separated and decentralized for Double 11. While more emphasis has been put on cooperation in recent years, it is not easy to coordinate resources at each stage. For example, nearly 30 million square meters of global warehouses, three million logistics workers and more than 200,000 express vehicles participated in the delivery in the 24-hour shopping event last year.

Daniel Zhang, chief executive officer of Alibaba, called the cooperation a "social collaboration" after last year's Double 11. The firm is now focusing on how to better solve the problem of buying goods from all over the world and selling goods globally through collaboration.

"There were 170,000 orders in a single day when we made big promotions in Russia five or six years ago, while Russian post could only handle 30,000 orders a day at that time, so such a big promotion will cause service problems" recalled Wang Mingqiang, general manager at AliExpress. To solve this problem, Russia's infrastructure needs to be upgraded to help other links including Russian postal service, and this is also true for other places like Africa and South America.

Cainiao network has been cooperating with commercial logistics partners on the opening of special routes around the world for two years, while also seeking out overseas warehouses.

In addition to providing global business infrastructure, overseas and bonded warehouse networks to small and medium-sized firms, Cainiao network has worked with the customs to enable second-level clearance across 10 bonded zones, where bonded warehouse covers more than one million square meters, to help the high-quality overseas goods enter the Chinese market. More than 50 chartered planes and nearly 1,000 containers full of goods have been used to help Chinese goods enter overseas markets.

By forging a direct connection with the customs clearance system, the efficiency of clearance and approval for import packages has also accelerated. More than 10 million orders had received customs clearances as of 09.01 a.m. yesterday, which is 10.5 hours earlier than that level for last year's event.