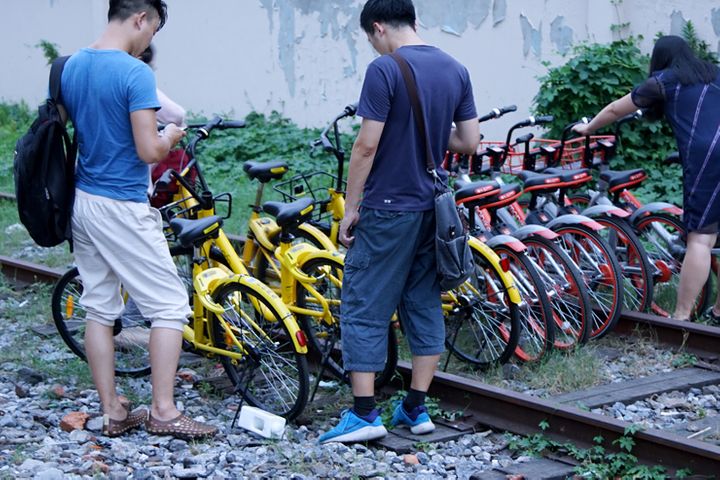 (Yicai Global) Aug. 8 -- The growth of the shared bike industry has led to chaotic parking, and regulators from two cities in South China have halted rollouts of new shared bicycles.

Authorities in Guangzhou and Nanjing have said in the past week that they will not allow new shared bicycles to enter the market. The number of shared bicycles in Guangzhou is more than 800,000, and represents a surplus, Xkb.com.cn reported. The relevant departments in Guangzhou told bike-sharing platforms not to introduce new bicycles and urged them to improve their operations, inspection and maintenance systems and management teams.

Some 450,000 shared bicycles have caused a "disorderly parking" problem in Nanjing, Yangtze Evening News reported. The Nanjing Municipal Transportation Bureau, Public Security Bureau and Urban Management Bureau met on August 3. They are requiring firms to suspend new shared bike rollouts by the end of the year. Starting from next year, bike-sharing enterprises must file information at the city's urban management department such as the number of bicycles to be put on the market in the city and their planned locations before the bikes hit the streets.

China had nearly 70 internet bike rental operators with a total of more than 16 million shared bicycles and over 130 million registered users as of last month, and they have completed more than 1.5 billion transactions, China's Ministry of Transport statistics show. China has published national guideline to regulate the shared bike industry.

These moves signal that the savage development stage of the shared bike industry is over, and it may enter an era of stable growth.