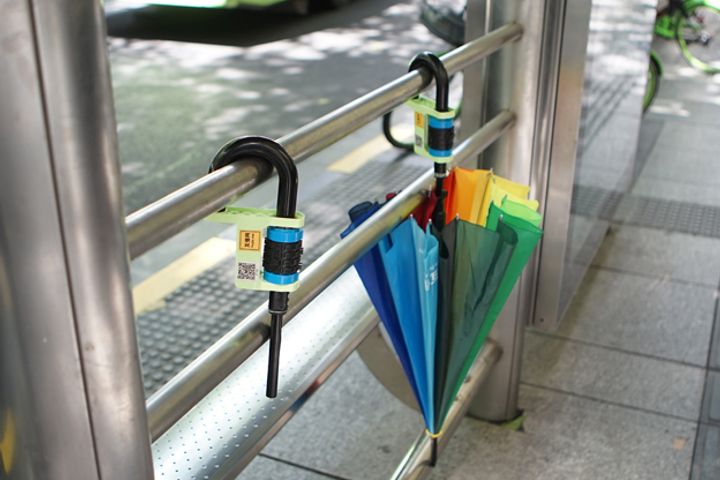 "Bringing in investors will give us an edge and scope for imagination in business development and business models," said Liu Qing, founder. "Focus Media and LY.com will help provide offline scenarios and traffic channels, such as office buildings, communities and major traffic hubs, and Focus will also help Usan gain access to media outlets. Jiufu will help provide financial support and credit services."

From proposing the idea of umbrella-sharing in late June to officially rolling out the service earlier this month, Usan established its initial presence in just three months. It has already distributed some 100,000 umbrellas in Shanghai, Suzhou and Nanjing. Usan is China's first umbrella-sharing service to adopt a large, plug-in free umbrella stand that can accommodate more than 120 umbrellas, which the company believes can help solve the problem of limited public power facilities.

Users can check out a Usan umbrella by scanning a QR code via Alibaba Group Holding Ltd.'s [NYSE:BABA] Alipay, a mini app on Tencent Holdings Ltd.'s [HKG:0700] WeChat, or the company's official WeChat account. Customers can borrow an umbrella for free for 15 minutes or CNY1 (USD0.15) for 12 hours, with a CNY29 deposit and rental fees of up to CNY28.

China's sharing economy is expanding in all directions, while shared bikes are at the forefront, there are other items available for rental, including offices, power banks, accommodation, bags, kitchens and even wardrobes. However, not all of them look too promising.

"It is difficult for the sharing industry to afford operating costs by merely relying on rental income," Chen Ke, global partner and vice president for Greater China at Roland Berger Strategy Consultants, told Yicai Global. "An umbrella-sharing startup lost nearly all of its umbrellas soon after rolling out the service, so not everybody is willing to share.

"Of course, if companies insist on offering such sharing services, it is very likely that they do so to make money via other channels. For example, umbrella-sharing and portable battery-sharing companies may use umbrellas and portable batteries as an advertising platform, but their core profits come from advertising. Collecting Big Data is another possible motive, as firms may analyze this to further explore business value."

The fact that Usan is backed by LY.com, Focus Media and Jiufu Group has triggered speculation that it could be a new-type dissemination channel for Focus Media's advertising business and a feasible marketing platform for LY.com, which provides information on local attractions for tourists and residents in cities across China.