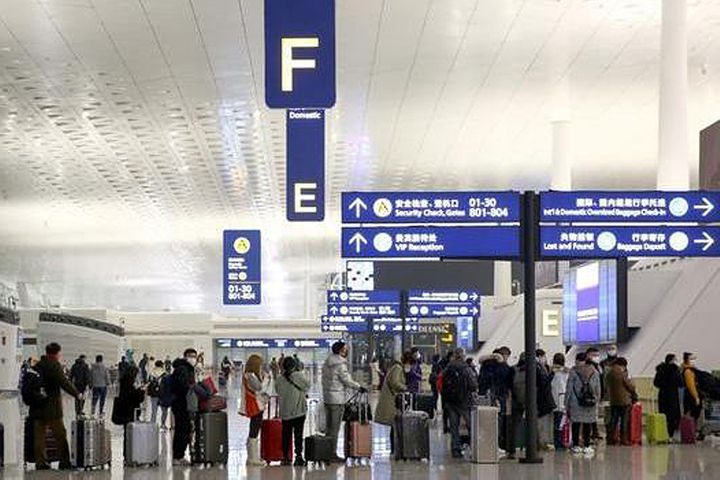 Virus-Stricken Wuhan's Airport Is Still Flying After Stop Order, But Flights Will Tail Off

The central China transit hub of 11 million residents is at the epicenter of a pneumonia that is sweeping China and is poised to become a global epidemic, and which is caused by the novel coronavirus the World Health Organization has styled 2019-nCoV.

The city airport will receive and see off 600 planes today, it said on China's Twitter-like Weibo at 9.30 a.m. today. As of 9 a.m., 45 planes had landed at or left the airport, while 199 flights had been canceled, it added.

China Southern Airlines, which has allocated the most transport capacity to the airport, has canceled all flights with Wuhan stops after 10 a.m. China Eastern Airlines, with the second-greatest capacity in the airport and Air China with the third, have also canceled part of their flights, but kept some running, Yicai Global noted.

All carriers will make great changes to their flight plans today or tomorrow to fully cooperate with the measures for prevention and control of the pestilence, according to the airport.

The Civil Aviation Administration of China has talked with Wuhan authorities and opted to let airlines cut down or cancel flights on their own under the general principal of 'a soft landing' to gradually reduce flights, several airlines told Yicai Global.

Wuhan Tianhe Airport has 76 domestic direct flights with 2,879 scheduled departures, 30 international routes and planned departures of 293 flights, four routes to Hong Kong, Macao and Taiwan, with 55 scheduled departure flights from January 22 to February 1, per the data from the Flight Manager plane booking app as of 1.30 p.m. yesterday.

China Southern Airlines has invested the most transport capacity of the 27 domestic airlines connecting to the airport, followed by China Eastern Airlines, Air China, Xiamen Air and Hainan Airlines, according to Flight Manager.