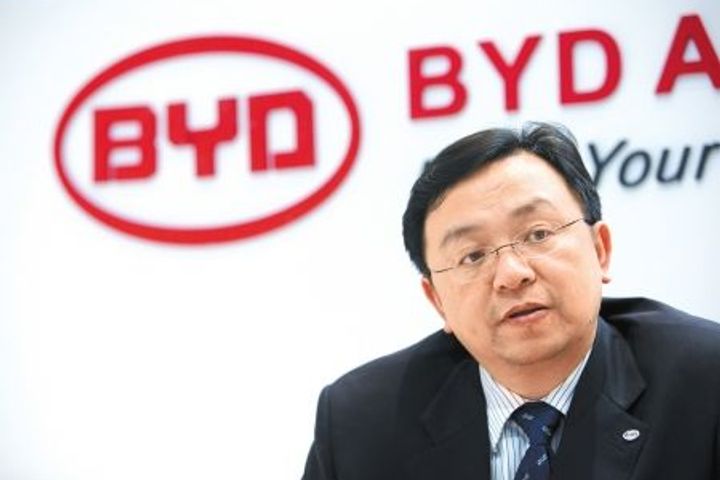 (Yicai Global) Sept. 7 -- Wang Chuanfu, chairman and president of BYD, is perpetually busy, going from being a layman to an ace driver in the automobile field, and from an alpha geek to a conference maniac. Wang, affectionately called by BYD fans 'Brother Boatman,' which is a pun on his name, firmly grasps the helm at BYD.

The world of a geek might be lonely, however. There are often no fixed executives to accompany him when Wang shows up at various events. Sometimes, he even travels alone in economy class.

Wang Chuanfu has boldly diverted the firm's direction many times, from batteries, to IT, to automobiles and monorails since he founded BYD in 1995. He bet on technology from the outset and then developed strategies accordingly. To have just one person calling all the shots spared the firm otherwise cumbersome procedures, which is one of the reasons why BYD, a private enterprise, came to rank first in global new-energy vehicle sales in just over 20 years.

Thus far it seems, a unique vision has led Wang. Though BYD grounded on rock bottom once, it has never struck a reef on any course Wang directed it. Wang's obsession with technology and confidence in strategy have netted him a bevy of fans, both inside and outside the firm.

The limitations of one person's abilities began to become evident, however, with the expansion of BYD's cross-border business. Brother Boatman came under ever more pressure holding the helm. Wang announced in November 2017 the shakeup of the firm's structure at a meeting of senior executives, in a bid to more quickly respond to the market through these reforms.

Wang Chuanfu is now gradually delegating power lower down. Though he continues to manage the battery, new energy vehicle and monorail sectors, he has handed over the mature and stable sector of IT and others to Senior Vice President Wu Jingsheng and other top management.

There is no second fiddle to Wang in BYD, but Wang does have a good group of second mates.

Wu Jingsheng, comes from Wuwei county, Anhui province just like Wang. He joined BYD in 1995 and has taken care of company finances for Wang ever since. Wang Chuanfang, Wang's elder brother joined BYD in 1996 and is in charge of the departments of human resource and logistics, and thus Wang Chuanfu need have no worries as he sails into storms.

Wang said that he just wanted to "achieve the will of his mates" when he recently recalled his goals of founding the firm.

Wang remained kind to his mates who helped him start his business even after it became successful. Wu Jingsheng got paid more than BYD's helmsman Wang when the former served as secretary of the board. BYD changed its senior executives January last year, and one of the two new vice presidents is Wang Chuanfang, who is also a BYD shareholder.

Wang Chuanfu, born in 1966, is still full of energy and has reliable mates sharing his burdens. He may not need to think about finding himself a successor for now.