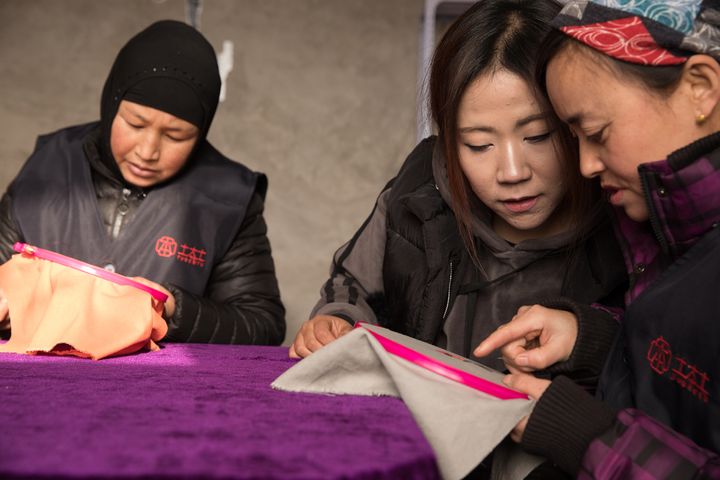 Weaving Women Into the Fabric of China's Success

(Yicai Global) June 24 -- When Ma Xiaoxiao was 10 years old, she moved with her parents from the small Chinese village of Daban to Lanzhou, the capital city of Gansu province, where she worked in the restaurant, textile and Internet café industries.

"When I travelled back and visited our neighbors' families, to my surprise, it was the same as 20 years ago: when guests visited, the women wouldn't appear. They were required to take care of the whole family but not themselves," recalled Ma Xiaoxiao, who is now in her twenties. She made up her mind to do something about it.

Daban is located in the Dongxiang Autonomous County, where the people are among the poorest and least educated of China's 55 ethnic minority groups. In 2017, the average annual income was around USD750, and the average person only received 7.2 years of education. They mainly live an agrarian lifestyle. A conservative mindset restricts the women to staying at home, raising children and doing household chores.

Dongxiang County is a dry, desolate place, yet out of this desert comes some of China's most beautiful embroidery. In comparison to the great silk embroidery traditions of southern China, Dongxiang embroidery is less delicate, but more bold and brightly colored.

Ma Xiaoxiao returned home in 2018 and set up "The 13 Skilled Female Artisans" embroidery factory with the aim of preserving local traditions and liberating Dongxiang women from crippling poverty and crushing family burdens. She felt that this was a good way to help them gain financial independence along with a greater sense of self-worth and accomplishment.

In order to better understand the uniqueness of her cultural heritage, Ma Xiaoxiao visited the village's best embroiderer, Tangnu Geiye, now in her 70s. Tangnu Geiye explained to Ma Xiaoxiao that traditionally the Dongxiang people embroidered everything from undergarments to door curtains.

The old woman showed Ma Xiaoxiao some of the beautiful works that she made in her heyday, including a stunning pillowcase specially prepared for her daughter's wedding. Light purple, loudspeaker-shaped morning glory flowers were intricately stitched using a special technique unique to Dongxiang embroidery.

In the old days, Tangnu Geiye joked, a woman who could not sew would not be able to find a husband, but now, with the advent of less labor-intensive machine embroidery, the women only make items for important occasions such as weddings and funerals.

Many of these works become family heirlooms, passed down from generation to generation. Ma Xiaoxiao's own family possesses a beautiful century-old pillowcase intricately decorated with the motif of a climbing melon.

At a local museum, Ma Xiaoxiao saw an exquisite gown around 150 years old that was embroidered with flowers. It made her realize that these traditions were not just a form of handicraft, but works of art. However, these skills were dying out and largely remained hidden from view, often used to decorate and strengthen the insoles of shoes.

"We cannot be the generation responsible for the disappearance of the Dongxiang people's embroidery traditions," she said.

Ma Xiaoxiao decided to take these hidden patterns and put them on everyday objects such as lanterns, handkerchiefs, pictures and tea coasters. She was determined to make Dongxiang embroidery known as one of the great embroidery traditions of China and at the same time to boost the prospects of women in the community.

However, her ambitions were not easily realized. Despite an initial investment of around USD15,000, after just three months she was overdrawn on three credit cards and for the first time in her life experienced a shortage of cash.

She struggled to find skilled embroiderers. Ma Xiaoxiao's call that the women leave home to work in her factory and earn a small income was met with deep suspicion. In order to enlist workers, she had to trek through the snow to visit each household bearing gifts to explain her project. One by one the women came until there were over 10 embroiderers, some just 20 years old, some over 60.

They huddled together on the heated, raised kang bed, chatting and laughing, trying out different designs and techniques, and comparing their skills. Ma Xiaoxiao paid around three dollars a piece for simple, high quality products. By the end of the month, most of the women were earning more than ten times that. It was a tremendous amount for them, and often the first money they had ever earned. Ma Xiaoxiao said that seeing their expressions upon receiving their first salaries made all of the hard work worthwhile.

The opportunity to earn a steady income transformed these women's lives. For the first time, they were able to buy their own clothes and makeup, and no longer had to turn to the men in their family for money. It not only gave them financial independence, it gave them confidence and hope. Slowly the word spread and more and more women came to join the team.

Ma Axiye, 49, was one such woman. She struggled to raise five children on her own after her husband was crippled in an accident. The opportunity to work at Ma Xiaoxiao's factory gave her much-needed stability and the belief that she could one day buy her youngest son a computer. Before this, a Dongxiang ethnic minority woman living in a small Chinese town would never have been able to realize such a dream.

Ma Xiaoxiaois part of a new generation of Chinese returning from the cities and transforming their hometowns through entrepreneurship. By providing tax incentives, improved credit availability, business training and technical support such as e-commerce website development, the government is encouraging the growth of small businesses in these neglected rural areas.

Projects such as Ma Xiaoxiao's are reviving the local economy in remote areas of China. By preserving and promoting traditional skills, they have become a source of optimism for numerous poor villagers and their families.