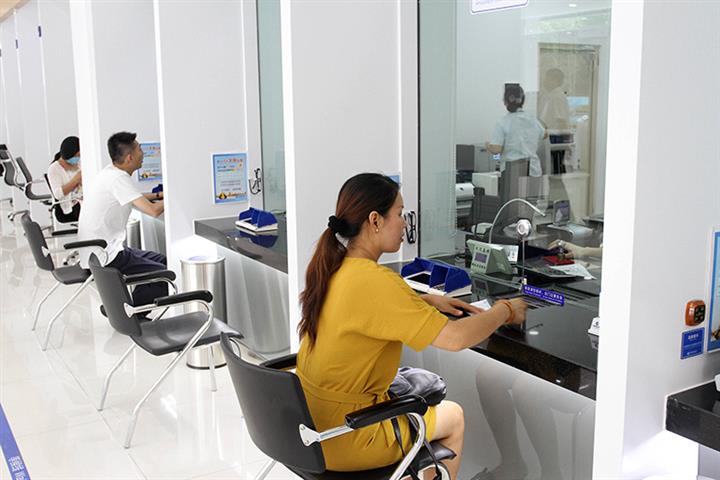 (Yicai Global) June 22 -- The recent “difficulty in withdrawing money” from a number of rural banks in China’s central Henan province has refocused attention on the country’s small lenders. But though little, they have become the most ubiquitous type of bank in China.

The country had 1,651 rural banks as of the end of last year, making up about 36 percent of all financial institutions in the banking sector, per figures from the China Banking and Insurance Regulatory Commission.

Rural banks are facing greater pressure in attracting deposits as China tightens supervision of the financial sector. As a result, the risk level of a few rural banks has risen rapidly. As of the second quarter of last year, a total of 122 were “high risk” institutions, accounting for about 29 percent of all such institutions.

Mergers and acquisitions of some rural lenders are also advancing steadily to resolve the risk. This will speed up the pace of reform and integration of rural banks, industry insiders pointed out, leading rural banks to face a “survival of the fittest” situation.

China’s rural banks are located in 31 provincial-level regions. Shandong and Hebei provinces each have more than 100 such lenders at 126 and 110, respectively, according to the corporate risk monitoring and warning platform Qiye Yujingtong.

The registered capital of rural banks is small, with 189 of the 1,651 having authorized capital of CNY30 million (USD4.5 million). The figure is CNY50 million for 265 banks, and CNY100 million for 342. At CNY11.7 billion (USD1.8 billion), Guangxi Pingnan Guiyin County Bank has the largest. Fenxi Taihang Rural Bank is the smallest, with CNY6 million.

As of now, there are seven rural banks whose total assets exceed CNY10 billion (USD1.5 billion) each, among which Jiangxi Ganzhou Yinzuo Village Bank has the most at CNY18.6 billion (USD2.8 billion).

The number with overall assets worth CNY100 million (USD14.9 million) goes beyond 910. But not all of these rural banks are profitable.

In terms of performance, just 354 of the 1,651 made public their data for last year, accounting for just 21 percent of the total, according to Qiye Yujingtong. Of them, 305 were profitable, five had net profit of more than CNY100 million, with the lowest making CNY28,800 (USD4,299). In addition, there were 28 rural banks with net losses, accounting for 8 percent of this total.

Rural banks have a relatively higher non-performing loan ratio, which reached 4 percent in 2020, according to a research report by Hua’an Securities. The NPL ratio of large state-owned banks was only 1 percent, while the figure for joint-stock banks and urban commercial banks was 2 percent. The ratio for rural commercial banks was 2.4 percent.

In terms of regulatory penalties, Qiye Yujingtong data revealed that since 2018 there have been about 1,500 pieces of information involving penalties on rural banks for illegal operations, breaches of anti-money laundering law, loans issued across business regions and illegal sales of insurance products commissioned by insurers.

At the same time, equity changes at rural banks have also been more frequent. On the official website of the China Banking and Insurance Regulatory Commission, a keyword search for “rural banks” and “equity changes” threw up 1,866 items.

The reform of China’s rural banks is set to pick up pace considerably amid growing pressure on the lenders to entice depositors and concerns over their ability to deal with risk.

It is harder for rural banks to attract deposits than large state and joint-stock banks, partly because of their location and their less impressive reputation. So to lure savers, some rural banks offer higher interest rates or yields.

Pressure on rural lenders has also built up because regulatory efforts to standardize competition have become tougher in the past two years, with restrictions on structured deposits, internet deposits and other tools designed to attract savings. The ceiling for deposit interest rates has also been lowered.

Risks levels at local lenders have risen substantially in recent years, with rural banks making up about 29 percent of all the institutions labeled as “high risk” as of the end of the second quarter of last year, according to data from the People's Bank of China.

The CBIRC came up with various measures to defuse the risks at rural banks in January last year, such as bringing in qualified strategic investors for acquisitions and injection of funds and organizing mergers between the lenders.

China has even more rural banks than it had counties, Zhou Maohua, macro analyst at China Everbright Bank, told Yicai Global. Rural bank reforms will increase amid enhanced regulatory supervision and the expedited disposal of risk, he said.

Last month, the CBIRC again mentioned “encouraging high-quality banks, insurers, financial asset managers and other kinds of institutions to participate in mergers and acquisitions of mid- and small-sized rural banks.”

The statement indicated that there are risks among mid- and small-sized rural financial institutions, according to Huang Dazhi, a researcher at Star Atlas Institute of Finance. Such institutions offer a vital local service for rural economies, so rallying solid institutions to take part in the mergers and acquisitions of these small banks is highly likely in the future, Huang predicted.