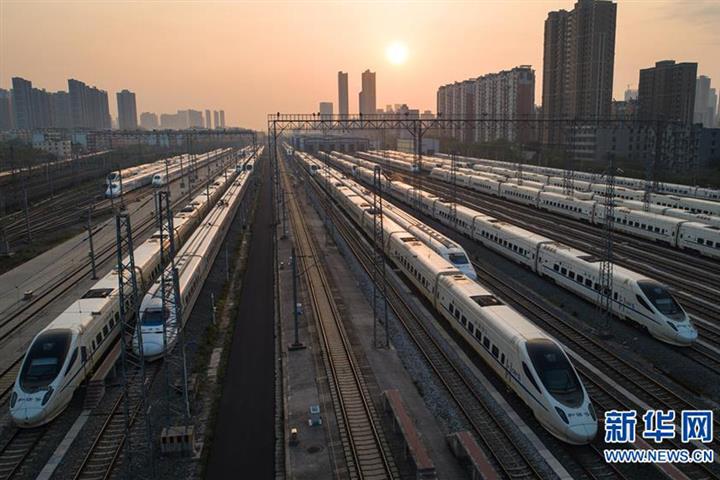 Wuhan Unlocked Is 'Much Smoother Than Expected'

(Yicai Global) April 8 -- Wuhan removed 75 exit checkpoints on highways at midnight allowing people who have been locked in the megacity for 76 days to finally leave and residents stranded outside by the Covid-19 pandemic to go home again.

Wuhan will see 1.8 million vehicles on the road today, and the traffic flow in and out of the city is expected to rise significantly, the city's traffic police predicted based on Big Data analysis, projecting it will reach its peak today before slowly easing off around April 15.

"It was much smoother than expected, and I went in and out of the city unimpeded," a resident surnamed Liu who works at a large auto factory in Wuhan told Yicai Global how he felt about driving from and to the city after it was uncaged today.

Liu left Wuhan for his hometown of Wuhu over 100 kilometers away to pick up his wife who was separated from him for two and a half months following the sudden shutdown. "I drove from home in Wuhan at 11.50 p.m. yesterday and got out of the city at around 0.15 a.m. today without any inspection. I arrived ... at 1:30 a.m., picked up my wife and drove back to Wuhan immediately, arriving home in the city at about 3.25 a.m. without impediment," Liu said.

People are also choosing to leave the Hubei province capital by train, intercity bus and plane, in addition to driving, and 276 passenger trains will depart from railway stations in the city today, of which 54 trains originate there, the head of the department of China National Railway Administration's Wuhan division told Yicai Global, also predicting around 55,000 passengers will leave the central manufacturing and transport hub by rail today based on ticket pre-sales, with 40 percent of them to go to the Pearl River Delta region.

The city of 11 million residents at the heart of China's coronavirus outbreak is further opening its local traffic as 30 buses started operating today, added to the 316 buses that previously resumed operation, and 70 percent of the city's bus network and 78 percent of its subway grid have restarted. Taxis also again cruised the city's streets today.

Locals' lives are gradually returning to normal. Shopping malls are steadily resuming their customary business hours, hair salons are reopening, and many parks in the city have thrown their gates open to the public from today.

The government is reminding the populace to continue to pay attention to Covid-19 prevention and control measures, however, even though the traffic shutdown has been lifted. The Hubei Epidemic Prevention and Control Headquarters is urging the public to travel less, not to leave their neighborhood, the city or the province unless necessary, not to gather in groups and to wear masks in public.