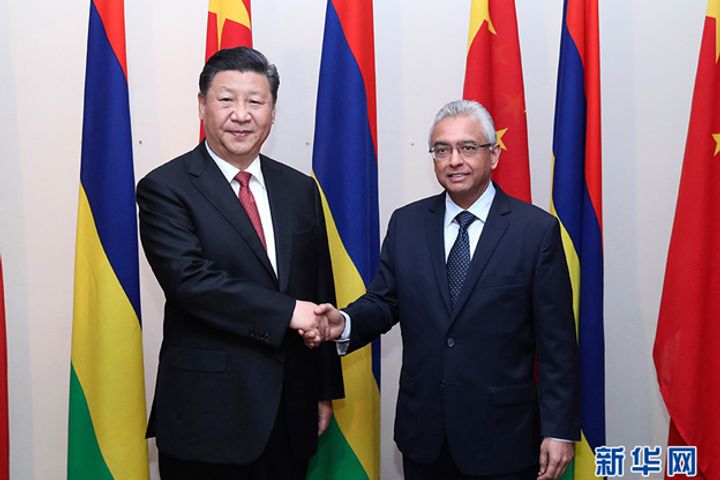 (Yicai Global) July 30 -- President Xi Jinping has called for China and Mauritius to negotiate on the signing of a free trade agreement as early as possible following a meeting with Mauritian Prime Minister Anerood.

Mauritius's geographical advantages can help the Indian Ocean island state to make up a major link in the Belt and Road Initiative, Xi said after the meeting on Saturday.

A joint feasibility study which finished in May found that the establishment of an FTA would be in the interests of both sides and bode well for deeper bilateral trade and economic relations.

The two countries officially kicked off the negotiations last December, followed by a first round in Mauritius in April and a second in Beijing in June. The deal would mark the first free trade zone between China and an African country.

The two parties are working on document preparation and market access, as well as conducting full and in-depth exchanges related to key areas and sensitive products. Negotiations have brought positive progress so far and the two sides have reached a consensus on the priorities for a variety of topics, laying a sound foundation for important and difficult issues in the next step, information from the Chinese commerce ministry shows.

China is Mauritius' second-largest trade partner and the largest source of imports. Mauritius is among the top-performing economies in Africa and could serve as a bridge connecting Chinese investors with the African continent.

Mauritius, about 2,200 kilometers off the southeast coast of the African continent and adjacent to Reunion, a French overseas department, is home to some 1.3 million people. The island nation has experienced significant development since its independence in 1968 and has emerged as a middle- to high-income country. Nevertheless, growing wealth inequality and the influence of the climate change remain a huge drag on its further growth.

Real gross domestic product growth in Mauritius stood at 4 percent last year, largely driven by the services industry, especially finance, trade and hotel services. The hotel services development has mainly benefited from a boom in the tourism. The number of tourists to Mauritius posted a 5.2 percent increase to 1.3 million.

Chinese tourists have been the primary driver of Mauritius' tourism sector, with close to 100,000 travelling to the idyllic destination every year. Direct flights run between the island and four major Chinese cities, namely, Beijing, Shanghai, Shenzhen and Chengdu.

The total trade between the two countries amounted to USD784 million last year, up 0.8 percent annually, among which Chinese exports rose 0.4 percent to USD762 million and the Chinese imports surged 14 percent to USD22 million.