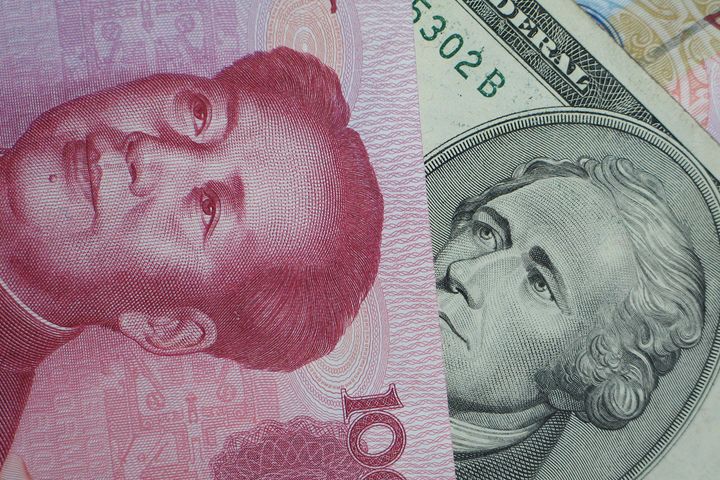 (Yicai Global) Sept. 8 -- The exchange rate of the yuan against the US dollar has bounced back in the past few months. Institutions generally forecast that the yuan-to-dollar exchange rate will stabilize in the 6.5 to 6.7 range, but investors still need to pay close attention to the changes in policies of the Federal Reserve and the European Central Bank (ECB) in the future.

"Personally, I believe this strong appreciation of yuan is totally a result of market factors, rather than interventions by the government," said Sheng Songcheng, counselor of the People's Bank of China. "Foreign exchange reserves would decline if the government intervened, but it has seen a steady rise."

The yuan will probably remain strong or embrace a steady rise in the second half of this year, and the expectation of one-way devaluation has basically reversed, he said.

"Although the market has proved that it is wrong to hold excessive bearish bets on yuan, it is not appropriate to be too bullish," Wu Zhaoyin, head of macro strategy at AVIC Trust Co., told Yicai Global.

"The yuan looks strong, partly because the dollar is too weak," Wu said. "Seen from the market movements, the euro-to-yuan exchange rate has been on the rise, and no significant declines in the rates of British pound and Japanese yen against the yuan have been seen. Movements in the yuan's exchange rate in the coming months will depend mainly on thetrajectory of China's economy."

Willingness of closing positions in some stop-loss orders and exchange settlement of corporations has risen after the yuan-to-dollar exchange rate broke 6.7 last month, and some yuan short positions may be changed to long ones, bringing net capital inflows.

"China's foreign exchange reserves in August achieved the first seven-consecutive-month gain since June 2014, among which an increase of about USD3 billion to USD5 billion was brought by capital inflows," said Liu Jian, Bank of Communications Co. senior analyst.

Inflation in the United States is "far below" the Fed's target, and the Fed should be prudent about further interest rate hikes before it is confident about a rebound in inflation, said Federal Reserve Governor Lael Brainard.

"This has led to a cooling of expectations for the Fed's interest rate hike in December, leaving the dollar at risk of continued decline," said Forextime Ltd. Analyst Zhong Yue.

The dollar's weakness will be a constant theme in the foreign exchange market from September, said Zhong. Technically speaking, the dollar is facing heavy selling pressure. If the dollar index is repeatedly blocked at 92, it may fall further to 90.

Although the dollar has been oversold, this does not necessarily mean that a trend reversal for the dollar index is on the horizon. "The last overselling of US dollars occurred from the beginning of May to the end of June last year, hovering at the bottom for nearly two months," said Liu Xia, chief forex trader at Cloud Hands Trading Ltd.

"We don't think the ECB will cut quantitative easing by mid-2018," said Andy Gates, European economist at Nomura Holdings Inc. "But during this time, the market and the ECB may be thinking about how to exit in the future."

"The ECB may not react too much to the appreciation of the euro," he said. "After all, European monetary policy is still very easy in terms of the overall interest rate environment."