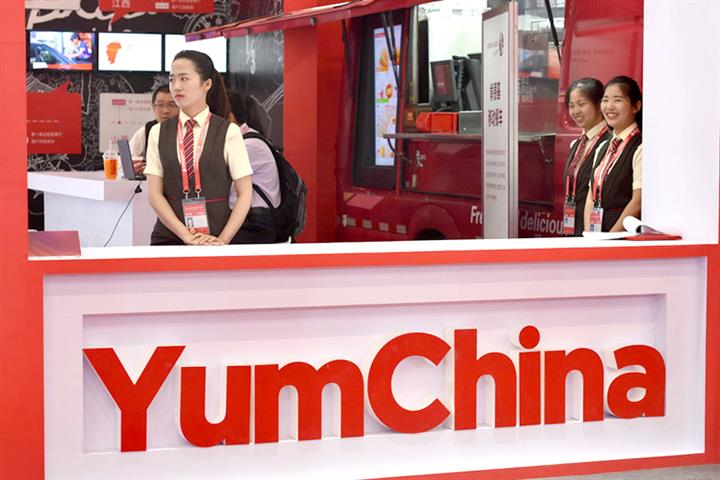 (Yicai Global) Sept. 24 -- Shares of Yum China Holdings rose after the owner of the Kentucky Fried Chicken, Pizza Hut and Taco Bell chains in China said it is speeding up its expansion and plans to raise its capital expenditure to between USD5 billion and USD6.5 billion over the next five years.

China’s biggest fast food company is accelerating its store network expansion, trying to reach the milestone of 20,000 quicker, the Shanghai-based firm said at an online investors day yesterday. It had over 11,000 at the end of the second quarter. The increased capex outlay will go to speed up core brand growth, remodel stores, scale up emerging brands, and enhance supply chain and digital infrastructure.

“We see plenty of opportunities to grow quickly,” Chief Executive Officer Joey Wat said. “We will drive growth from our core brands, as well as emerging brands such as Lavazza.”

Yum China said it will invest USD200 million with Luigi Lavazza to expand the Italian coffee brand’s network of stores in China to 1,000 by 2025.

Yum China has earmarked investment of USD1 billion over the next five years to expand its logistics network to 45 to 50 logistics centers and consolidation centers, supply chain digitalization, and sustainability initiatives.

In the first half, Yum China recovered steadily from the pandemic and reported USD2.5 billion in operating revenue in the second quarter, up 29 percent from a year ago, according to its latest financial report issued on July 29. Yum China said it has the potential to achieve double-digit growth in sales, operating profit and earnings per share in the long run.

“Yum China has been demonstrating its resiliency and agility during the pandemic,” Wat said. “Our core brands KFC and Pizza Hut responded quickly to the situation and delivered solid results over the past 18 months.”

KFC’s sales rose 6 percent in the second quarter from 2019’s pre-pandemic levels, and operating profit jumped 15 percent in the same period. KFC’s chain had over 7,600 stores in China as of June 30.