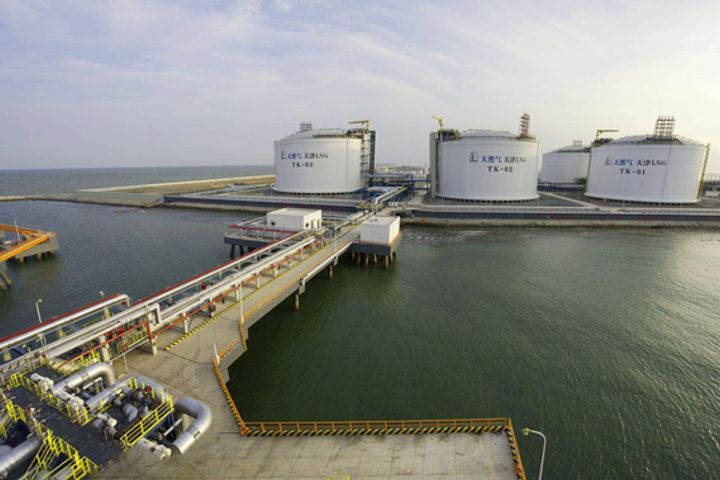 (Yicai Global) October 22 -- China's eastern province of Zhejiang aims to become a key national hub for the supply of liquified natural gas with plans to turn the coastal city of Ningbo into a center for imports of the commodity.

"The provincial development and reform commission and energy bureau are formulating a plan to expand the construction of LNG terminals", state-backed The Paper quoted Cai Gang, the deputy director of Zhejiang provincial development and reform commission, a saying. "The plans aim to make Zhejiang an LNG import center of national importance and help solve the problem of insufficient and unbalanced natural gas supply in the province and to provide natural gas to the national pipeline network."

Cai also suggested that Zhejiang will increase investment in various aspects including natural gas pipelines and LNG terminals to realize the target of becoming a national LNG hub. "We are formulating plans to make full use of the advantages in terms of ports, waterways and the market," he added.

In terms of conditions of supply and demand, natural gas by land cannot meet market demands, he said, adding that the gap must be filled by LNG.

For now, Zhejiang has set up LNG terminals in Ningbo and Zhoushan. Under the provincial plan, besides the expansion of existing terminals, new projects for LNG transfer, storage and transportation will be built in southern parts like Yuhuan and Wenzhou, as well as in northern parts including Jiaxing.

LNG is natural gas that has been condensed and cooled to a liquid form for more flexible transport compared with pipe-line based natural gas. Imported LNG arrives at China's coastal terminals after long-distance marine transport, then enters the pipeline network after regasification or is delivered to the downstream market by via tanker vehicles.

Demand for natural gas has been increasing in Zhejiang in recent years with consumption growing 19% annually last year to 10.5 billion cubic meters. Total demand is expected to top 14 billion cubic meters this year representing growth of close to one-third.

Under the current industrial development plan from Zhejiang provincial government, LNG supply will increase continuously and make up 59% of natural gas supplied within the province by 2020.