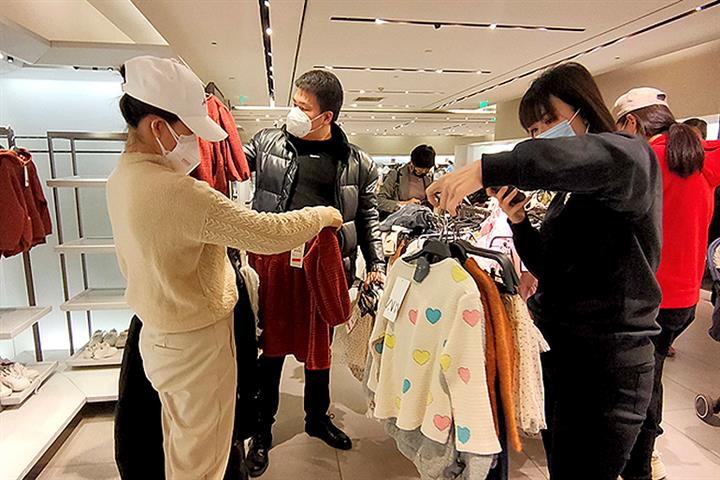 (Yicai Global) May 30 -- China should roll out trillions of Chinese yuan, equivalent to billions of US dollars, of consumption incentives to reverse the downward trajectory of the economy given that the multiplier effect, or the proportional increase in final income resulting from an injection of capital, from personal spending is three times that of investment.

China's total retail sales of consumer goods slumped 11.1 percent in April year-on-year amid a resurgence of Covid-19 in the country. A big drop in spending is threatening the survival of small and medium businesses and pushing up the unemployment rate. This may trigger a vicious cycle, for less spending means less revenue for businesses and fewer jobs which in turn means less income for people and thus less spending.

Yet the marginal effect of consumption is increasing. The consumption multiplier is estimated to be between three and five in China, while the investment multiplier is not more than 1.6 and even less than one in several provinces.

More than 70 percent of mature markets’ economic growth is contributed by personal spending. From 1971 to 2020, consumption in the US fluctuated between 75 percent and 85 percent of GDP while that in China was just 65.4 percent of GDP in 2021.

Per capita expenditure has declined more than disposable income since the onset of the pandemic and there is rapid growth in household bank deposits. This implies a significant drop in the willingness to consume.

Income growth rates tumbled by 8.6 percentage points in the first quarter from the same period last year, while the growth rate of expenditure sank by 11.9 points. This shows a reluctance to spend due to slower income growth.

Yet most people are not short of money. Some CNY7.1 trillion (USD1 trillion) of new deposits were logged in the first four months in the household sector, more than 70 percent of the CNY9.9 trillion deposited over the whole of last year.

As most micro, small and medium-sized enterprises directly serve customers, making efforts on the consumption side will not only help to quickly stabilize the Chinese economy from a macro perspective, but will also help to preserve smaller market players from a micro perspective.

The US and some European countries launched subsidy programs for residents and small and medium-sized enterprises soon after the first outbreak leading to a rapid recovery in spending. After the subsidies, consumption-driven business remained at a high growth level which played a significant role in the recovery of the US economy.

We recommend issuing trillions of yuan in spending incentives to stabilize consumption. The subsidies should mostly be in the form of cash and supplemented by vouchers. They should be issued at a regular and suitable pace, for example, month by month or batch by batch. At the same time, the price of all types of goods should be closely monitored to make sure there is not a big impact on the market.

Assuming a CNY5,000 (USD750) cash gift for the country’s 600 million low- and middle-income earners, the fund will amount to CNY3 trillion (USD450 billion). This is smaller than both the special debt quota of CNY3.65 trillion launched earlier this year and the combined central and local fiscal deficits of CNY3.37 trillion.