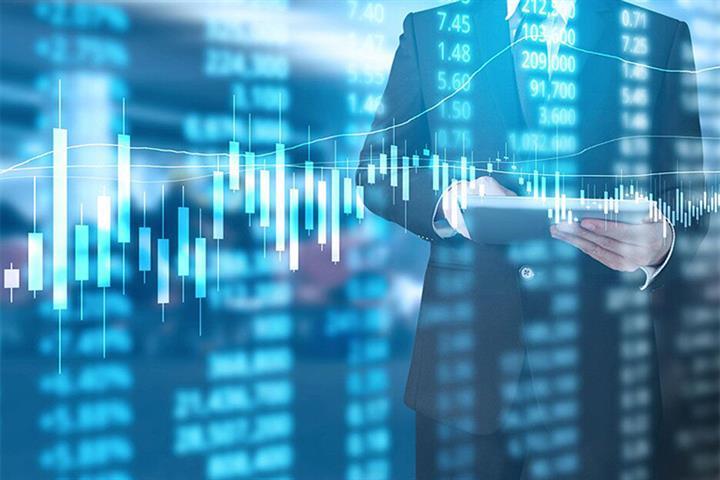 February monetary stats only half of expectation

Last Friday’s trading was memorable. But it was not only because of the Shanghai Composite’s (SHCOMP) V-shaped reversal intraday, and continued bounce from its 850- day moving average. Just a few hours before China’s monetary statistics were due for release in the afternoon trading, the China treasury bond futures surged suddenly. This late-day surge in both bonds and stocks left many experienced traders scratching their heads.

Later, at only half of the consensus expectation, China’s monetary stats for February proved to be very disappointing. Private long-term loan growth, a.k.a. mortgage, was negative for the first time in well over a decade. Of course, economists blamed the lunar new year as expected. But the market’s hope for aggressive easing must have been dashed, after cheering for the “historic” monetary stats in January.

Such weak credit growth helped explain why the sudden surge in both bonds and stocks – bonds thought the economic slowdown will continue, yet stocks continued to bet on looming monetary easing. But neither could explain the mysterious surge BEFORE the release. And when it comes to predicting the future, bonds tend to be right more often than stocks.

As mortgage growth decelerated dramatically, super-luxury apartments in Shanghai were flying off the shelves. A record RMB350,000 per square meter sales was reported, together with a flurry of apartment sales with total price tags from at least RMB30m to well over RMB50m or more. These are extra sour grapes, especially when the “Twin Sessions” didn’t mention “common prosperity”. These apartment sales did not need mortgage – they were all settled in cash. It is a wild menagerie.

Confidence in Hong Kong has not waned

At this juncture when the SHCOMP made its first attempt to bounce off its 850-day moving average, an important secular trend line, the bottom of the Hang Seng Index fell out. The Hang Seng failed to find support on its 17-year secular trend line, despite showing deep allocation value since Christmas and being the best-performing major index globally (Please refer to our reports titled “This Christmas, Hong Kong in Deep Value” on 2021-12-23 and “Hong Kong at Secular Inflection Point” on 2022-01-24 for more detailed discussions). We note that the secular trend line is neither support nor resistance level, but rather the underlying secular trend of an index. The addition to five more US-listed Chinese firms to the SEC watchlist according to the HFCAA did not help. The US-listed Chinese firms endured another bloody selloff on Friday in New York trading.

And traders are wondering what next for these US-listed Chinese firms. Even though these firms have at most till 2024 to comply with the SEC rules and hand over their audit draft for SEC’s perusal, the accelerated HFCAA can dramatically reduce this grace period to two years or less. The HKEx has been preparing for their return to Hong Kong, the offshore Chinese market. But the HKEx has already been overwhelmed by hundreds of A1 filings. And too many IPOs will drain the liquidity in Hong Kong. 2021 is a good example.

There will be no easy way out. As a leading China investment banker who had helped listing some of the biggest Chinese internet platform companies lamented during our chat, “the Chinese internet space had become uninvestable, everyone wants out”. Another fund manager who managed one of the largest China equity funds also jibed, “confidence is all but lost”.

Confidence is hard to come by and difficult to quantify, but we will give it a try anyway. We look at the change in forward points in the Hong Kong Dollar (HKD, Figure 1). Surprisingly, despite rife pessimism, the change in forward points in the HKD is more consistent with times with higher confidence about Hong Kong’s future, such as 2007 and 2017, not with the periods of 2005, early 2016 and early 2020 when confidence was low. Historically, the forwards points paid on the HKD are closely correlated with the return of the Hang Seng. Yet, right now, the Hang Seng has absolutely tanked, but confidence in Hong Kong’s future has not waned.

Figure 1: Confidence in HK as suggested by HKD forward points has not waned, but diverged from the Hang Seng 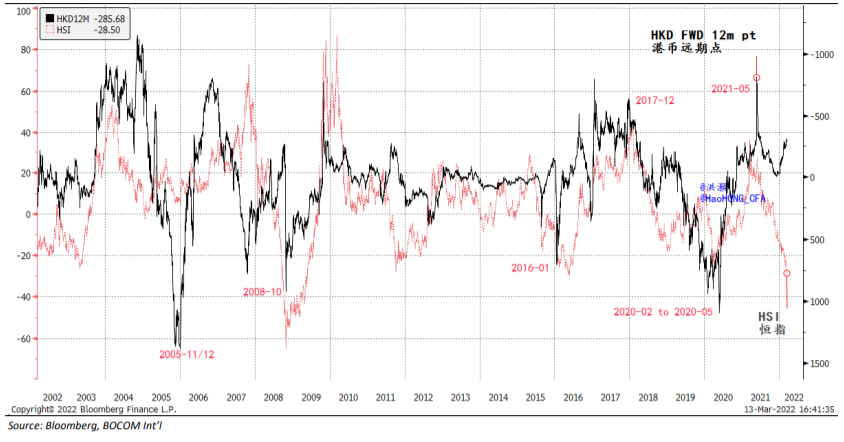 So who is still buying in depressing times like these? We look at cross-asset and crossownership holdings to gauge the penchant to buy or sell Chinese assets. Firstly, we examine the change in foreign holdings of the Chinese treasury. Our data show that foreign investors have been slowing their purchase of the Chinese treasury since early 2021, and this February they turned into outright outflow. Indeed, the outflow of US$35bn in February from the Chinese treasury is the largest single-month outflow we have since data history.

It could be due to the Russian central bank selling some of its Chinese treasury holding to raise cash, as its foreign reserve is frozen by the US. But there must be some repatriation flows as well, as some leading international investment banks have cut their ratings of Chinese treasury and advised clients to reduce holdings.

Importantly, bond investors are smart money. Historically, our data analysis shows that the change in foreign holding of Chinese treasury led foreign buying of onshore stocks and their return by up to about nine months (Figure 2). As such, when foreigners are reducing their Chinese treasury holdings, investors in onshore stocks must take note, as volatility will spill over from treasury to stocks.

Further, we must be mindful of the consequent pressure on the RMB, as foreigners exit. The potential contagion effect could weaken the RMB suddenly, and induce capital flight.

Right now, we are still seeing orderly depreciation of the RMB. The scenario of capital flight is a risk scenario in a market where cross-border capital flows are still monitored. 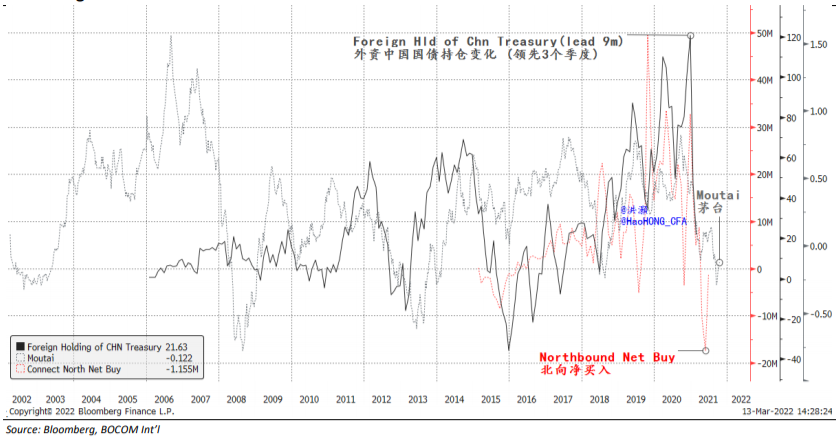 In Hong Kong, we are seeing the net buying activities in the market plunge to its lowest in history, and stuck there for months now (Figure 3). Meanwhile, our bottom-up aggregation suggests that, on the stock level, both institutional and individual investors have been dumping Hong Kong stocks (Figure 4). Even though the net-buying activities have been at the record low for months now, this tends to lead the eventual bottom in the Hang Seng by three months or more.

Figure 3: Buying in Hong Kong and daily sentiment plunged to one of its worst in more than a decade 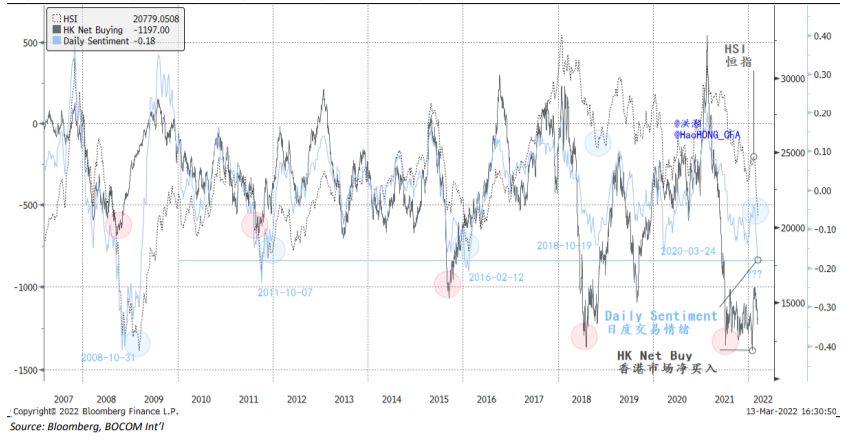 And the indiscriminate selling by both institutions and individuals suggests that prevalent pessimism in Hong Kong. Such pessimism tends to ferment at some of the most difficult periods for Hong Kong, such as 2012, second half of 2015 to early 2016, as well as early 2020 (Figure 4). As such, even though the bottom has fallen out of the Hang Seng, it would still be rash to catch the falling knives in the near term. But we are sure long-term investors must have begun to appreciate the long-term value in Hong Kong, as suggested by the HKD forward points.

The onshore market is a similar story. Net buying activity has precipitated into one of its lowest on record (Figure 5). However, we caution against using this measure as a market timing indicator for bottom fishing. Historically, it coincided with some of the lowest points in the SHCOMP, but not all. And its recent track record since 2016 has been blemished.

Figure 5: Buying of onshore stocks collapsing, but not yet seen its worst

Instead, the equity allocation in the onshore aggressive allocation funds stays elevated at still above 80% (Figure 6). These funds raised their equity exposure in late 2021, and only reduced slightly their risk exposure despite the recent volatile market. In our 2022 outlook “The Shadow Fed Tightening” published on 2021-11-15, we highlighted that fund managers were inappropriately positioning for the end of the cycle and loaded their portfolios with risks. Such excess risky disposition will likely take some more time to unwind.

Foreign investors are reducing their holdings of Chinese treasury at its fastest speed on record. Such treasury portfolio reduction tends to lead on/offshore stock buying activities and onshore stock return by around three quarters. Bonds are smart money.

Selling in Hong Kong is intense, and is at one of its worst on record. Both institutional and individual investors are dumping Hong Kong stocks. Such pessimism tends to ferment during some of Hong Kong’s darkest hours, and stocks, while capitulating, will still need time to heal. It would be rash to bottom fish in Hong Kong, but long-term investors must have begun to appreciate the long-term value of Hong Kong stocks. The forward points in HKD suggest so.

Net buying in the onshore market is at one of its worst on record as well. But its track record as a market timing indicator is patchy, especially in recent years. Meanwhile, onshore aggressive funds still have very high stock allocation of over 80% of their portfolios, and have only reduced slightly during recent market jolts. Such high equity exposure is not consistent with market capitulation. Our trading range forecast for the SHCOMP published last November was between just below 3,200 and just below 3,800, with the worst case being just below 3,000 should everything go south.

Russian central bank’s reduction of the Chinese treasury can have contagion effects on assets such as the RMB, and induce capital flight if not managed carefully. Chinese companies with Russian business connection can be affected by the US sanctions, although the extent is still unclear. While the PBoC will likely step up its easing efforts, COVID is resurging, too.

Be aware of the ides of March.