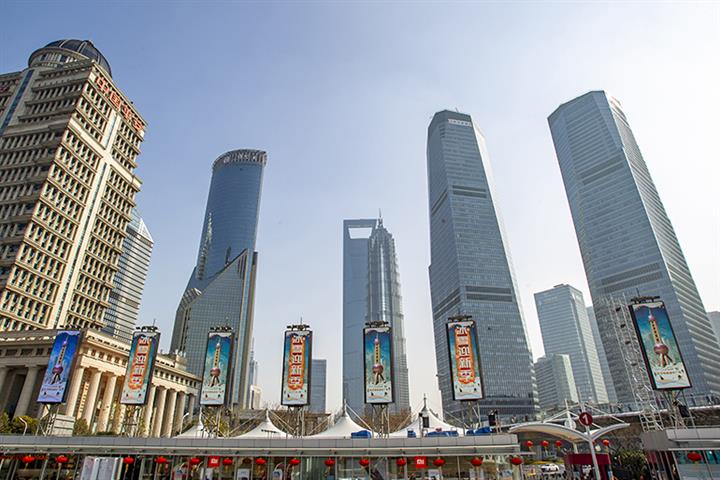 A country must follow the same development route as a city. A country should first grow from an industrial power to a trade power to become a major economy and then seek power and influence in the financial sector. Conversely, when a major power fades from the world stage the process begins at the bottom. Its economic strength weakens first, and finally it takes a back seat in the global financial landscape. Rivalries, conflicts, and confrontations between major powers nowadays are increasingly creating competition in the economic and financial domains.

What are the strengths that helped the city achieve such phased results? There are plenty. But four need to be focused on.

First, national strategy. Shanghai has developed from a national financial center into an international financial center thanks to the country’s national strategy. The city set goals to become an economic, finance, trade, shipping, and hi-tech hub of global influence, which was part of the national strategy. The five hubs empowered each other to jointly promote the city as a leading economic power. Shanghai achieved the goals of becoming an international shipping, trade, economic, and finance center, and formed a basic framework to become a hi-tech hub of global influence.

Second, market power. Shanghai is generally recognized as one of the cities with the most financial market categories, best financial infrastructure worldwide, and the widest variety of financial products in China. In terms of market types, Shanghai has national markets for stocks, bonds, currencies, foreign exchange, notes, futures, gold, and insurance. Besides conventional exchanges, the city has set up new markets and financial infrastructures in recent years, such as the cross-border yuan payment system, crude oil futures trading platform, and the Shanghai Clearing House, which greatly support the financial market’s stable operation.

In terms of pricing capability, the yuan-denominated Shanghai Price is continuing to expand its influence. Shanghai Gold, Shanghai Oil, Shanghai Silver, and Shanghai Bronze have come into the market. The Shanghai Interbank Offered Rate, the loan prime rate, and other benchmark interest rate regimes have been improved. And the China Foreign Exchange Trade System RMB Index is now an important reference for overseas and domestic markets watching the yuan exchange rate.

Third, opening-up. Shanghai has been furthering the opening-up of the finance sector, engendering greater confidence  in China’s financial market among global investors. Shanghai International Financial Center has launched the Shanghai-Hong Kong stock connect, the Shanghai-London stock connect, the bond connect, and the SGE International. A-shares, those traded in the Chinese mainland, have been included in international indexes MSCI, FTSE, and the Standard & Poor's Dow Jones. Chinese bonds have been added to the Bloomberg Barclays Global Aggregate Index and the J.P. Morgan Government Bond Index-Emerging Markets. Shanghai also took the lead in implementing innovative measures such as facilitating cross-border yuan settlement for high-quality companies and cross-border transfer of domestic trade financing assets, becoming an open yuan-denominated assets allocation center, and boosting construction of the city as a global asset management center. From an institutional perspective, Shanghai had nearly 1,700 licensed financial institutions at the end of last year, with foreign institutions accounting for more than 30 percent. Seventeen of the top 20 international asset managers worldwide have businesses in Shanghai.

Asset managers are still optimistic about the scale of business in Shanghai in the second half and even the whole of this year. They are accelerating their business layouts, reshaping investment strategies, and growing the scale of their sustainable investment products, according to a recent survey of mid- and high-level asset managers in Shanghai carried out by the CEIBS Lujiazui Institute of International Finance. Many global asset managers, such as Credit Suisse and Pacific Investment Management, plan to expand business in China and have applied for additional Qualified Domestic Limited Partnership quotas.

Guided by policies, Shanghai's financial technology sector is being perfected. The Digital Currency Research Institute of the People's Bank of China set up Shanghai FinTech in the city. After that, a number of fintech arms of well-known financial institutions at home and abroad were also established in the city. Moreover, the digital yuan pilot has been steadily implemented.

The above four points correspond to the core advantages of Shanghai’s transformation into an international financial center. National strategy is the fundamental guarantee, market power is the reliable foundation, opening-up is the base for internationalization, and scientific and technological innovation are the competitive advantages of the future. The four also show a clearer choice of path for the advanced development of Shanghai as an international financial center.

First, take the financial center as the fulcrum to serve China’s economic development with high quality and boost and stabilize that development to the greatest extent. Like New York, London, and other international financial centers, Shanghai is not just a city, but a demonstration of the whole country’s power. In the most fundamental sense, Shanghai’s achievements as an international financial center will ultimately depend on the strength of the country's economic development. According to the latest forecasts by the Centre for Economics and Business Research, the global economy will reach an important milestone this year, as global gross domestic product will exceed USD100 trillion. And by 2030, China will surpass the United States to become the world’s largest economy. Especially in the current critical period of many uncertainties, stable economic growth has become the top development priority.

For example, European countries are relatively small, and the talent flow between them is easy and often, along with the natural advantage of internationalizing talent. But if China wants to impose an international ratio, it may be a bit ‘blind.’ No subjective preference should exist in choosing the domestic or the international market. We must consider the international market based on the sound development of the unified domestic market, thus building a new development pattern in which the domestic and the international markets promote each other. In addition, compared with European and the United States, which ate mainly characterized by ‘direct financing’ in the capital market, China’s banking industry is developed, but direct financing is relatively insufficient. Whether China should follow Europe and the US is debatable. China need to optimize its development strategies according to local conditions and market differences and continue to take advantage of the banking industry and develop the capital market at the same time.

There is a broad consensus that whoever takes the commanding heights of global science and technology innovation and its application will also take the lead in terms of the world economy. So the competitiveness of the future economy will increasingly point to scientific and technological strength. Because of that, countries have spared no effort to boost investment in high-tech fields, and competition in digital technology and financial technology has become a reality and an urgent issue.

Shanghai is making every effort to build an upgraded international financial center by 2035 by following the 14th Five-Year Plan and long-term goals. Even with the impact of the pandemic and other international changes, the advantages of Shanghai's continuous financial improvement are still strong.