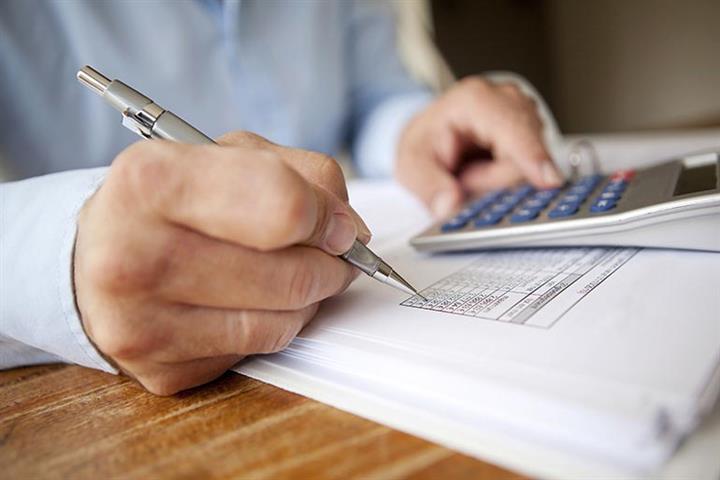 (Yicai Global) June 12 -- The Chinese Budget document – which was released along with other policy papers as part of last month’s “Two Sessions”, China's top legislative and political meetings – pulls no punches. It notes that the impact of the virus on the economy and an ongoing program to cut taxes are reducing revenue, while a certain level of expenditures needs to be maintained in order to achieve key priorities.

The graph below shows national government (central and local) expenditures and current revenue (tax and non-tax) as a percent of GDP. The dotted lines indicate budgeted projections for 2020. Since the government is projecting a deficit of CNY3.76 trillion, or 3.6 percent of GDP, it is implicitly assuming that nominal GDP will reach CNY104.4 trillion in 2020. This would mean nominal GDP would increase by 5.4 percent, down from 7.8 percent in 2019.

The graph shows that current revenues are projected to decline to just over 17 percent of GDP in 2020, about 5 percentage points below their 2015 peak. Last year, the government reduced taxes and fees by RMB 2.36 trillion. This year, it extended certain tax deductions, which will save the public RMB 2.5 trillion. Moreover, it is further reducing VAT rates and enterprise contributions to old-age insurance schemes, for an additional savings of RMB 0.5 trillion.

To ensure there is space for priority expenditures, the central government will cut spending by 0.2 percent, of which non-essential outlays will be slashed by more than half. It will prohibit the construction of new government buildings and local authorities will pare down spending on overseas visits, vehicles, and hospitality. 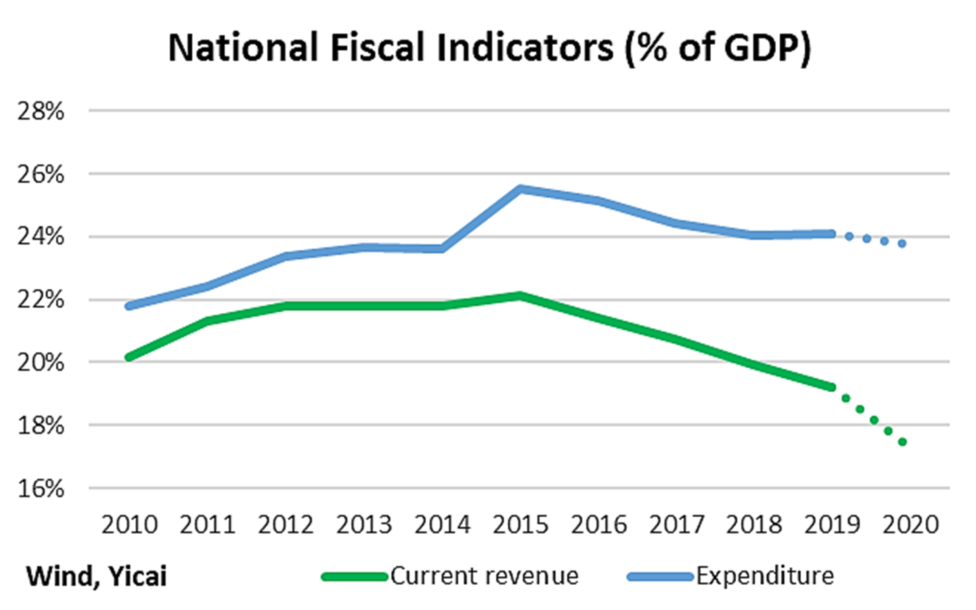 As the graph below shows, the budget is offering more support to the economy than the headline numbers would indicate. The national government deficit is set to increase from 2.8 to 3.6 percent of GDP. This represents stimulus of 0.8 percent of GDP.

In addition, a portion of the government’s current expenditures are funded through “carry over and surplus funds”. Essentially, the government is funding current spending by drawing down its assets. This sort of funding amounts to CNY3.0 trillion this year, compared to CNY2.5 trillion in 2019. If we calculate the change in the government deficit on a “cash basis” by combining the headline accrual deficit and adding in the difference in these “carry over and funds” items, we get stimulus of 1.3 percent of GDP.

The final source of fiscal stimulus comes from a CNY1 trillion special Covid-19 bond issue, which is not in the accrual deficit, but will fund current public health and epidemic control expenditures at the local level. This represents stimulus of 1 percent of GDP. 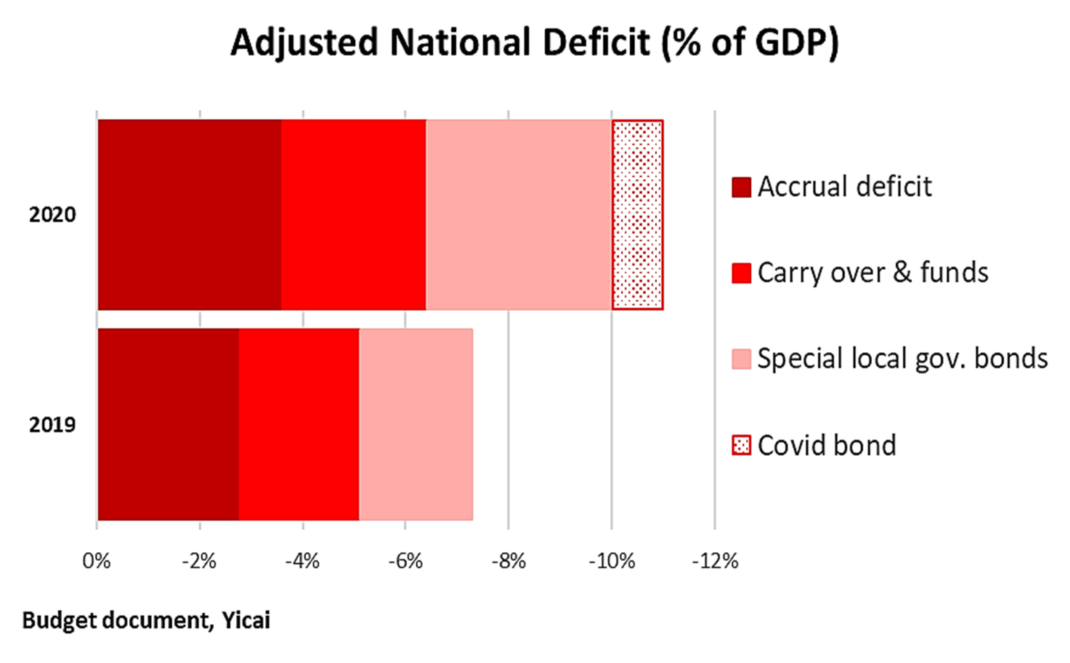 The government is also levering its state-owned enterprises to support the economy. State-owned property owners are being asked to reduce rents or defer their collection. Government-owned guaranty institutions that insure business loans, will increase the scope of their business and lower their fees. The government will cut the price of electricity by 5 percent for industrial and commercial users (except for energy-intensive businesses) and will introduce time-limited price cuts on firms’ gas consumption.

This system of transfers allows decentralized fiscal spending to operate within central government oversight. For example, this year the central government will transfer funds to the local authorities in four tranches. These tranches target specific spending and regional priorities.

For those areas in which there are shared fiscal responsibilities – such as education, elderly care, medical insurance, and basic public services – the government is transferring CNY3.3 trillion to local governments.

A special transfer of CNY0.8 trillion is being made to support government investment.

Finally, a one-time transfer of CNY0.6 trillion is being made for guaranteeing basic living standards.

In total, the CNY8.4 trillion in central government transfers represents an increase of 13 percent from last year. This is significant considering government expenditures, at both levels, are only increasing by 4 percent in 2020.

In addition to these budgetary transfers, the central government is giving the proceeds of the Covid-19 bond issue, noted above, directly to the local governments.

These large and targeted payments to the local governments, in a time of high fiscal pressures, shows how serious the authorities are about optimizing their fiscal resources. 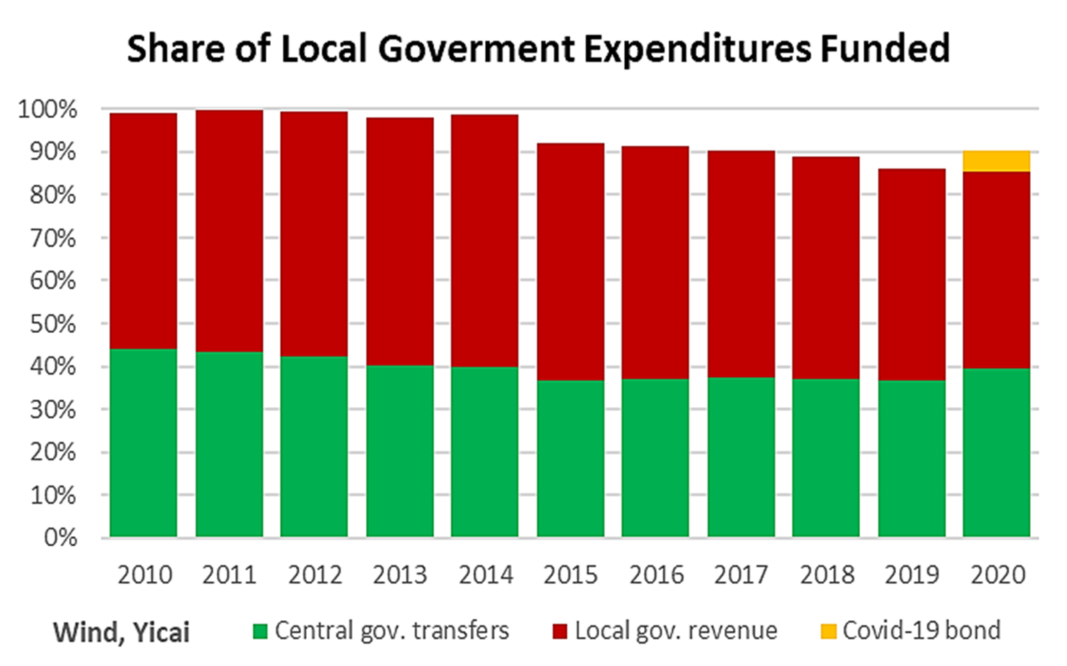 Mark KrugerMark Kruger is Yicai Global's Opinion Editor and Senior fellow to the Yicai Research Institute. He is also a Senior Fellow at both the University of Alberta's China Institute and the Centre for International Governance Innovation. Mark was formerly a Senior Policy Director in the Bank of Canada's International Department, a Senior Advisor to the Canadian Executive Director at the International Monetary Fund and head of the Economic and Financial Section in the Canadian Embassy in Beijing.
COVID-19 Is Accelerating China-US Convergence Is China Decapitalizing Its Banks? Budget 2020: More Fiscal Support Than Meets the Eye