The Government’s Three Key Priorities for 2020 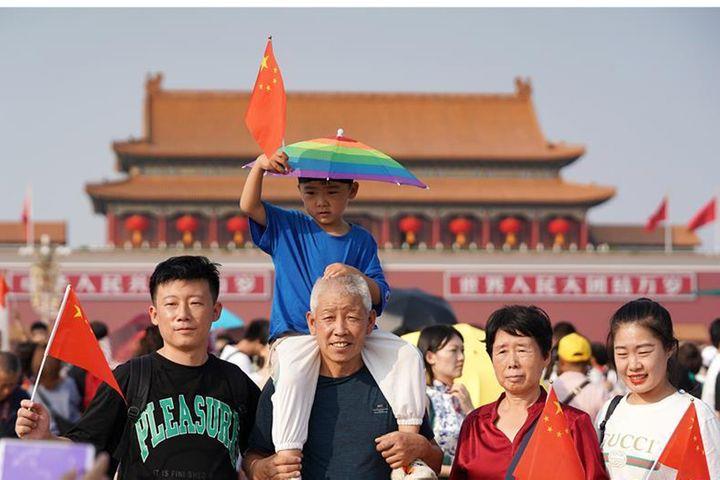 The Government’s Three Key Priorities for 2020

(Yicai Global) May 27 -- Last week, Premier Li Keqiang delivered his Work Report to the National People’s Congress. These work reports summarize the government’s achievements in the previous year and outline current policy priorities. The reports typically cover a broad array of economic and social policies and there is much continuity in the government’s objectives from year to year. Nevertheless, a close reading of the Work Report is indispensable for understanding the government’s thinking. Premier Li’sreport focused on three priorities for 2020: stabilizing employment, ensuring living standards and winning the battle against poverty.

The importance of these three priorities can be seen in the graph below which compares how often the phrases “employment”, “living standards” and “eliminate poverty” appear in the 2020 and 2019 Work Reports. Their frequency this year is all the more striking given that this year’s report is only half as long as 2019’s. The term “employment” appears almost 40 times, even more often than the term “pandemic”. There is a difference in emphasis as well. In this year’s report, 12 of the 21 references to “living standards” are about preserving or ensuring those standards. This compares with only 5 of 14 last year.  Similarly, this year’s report stresses protecting or stabilizing “employment”. 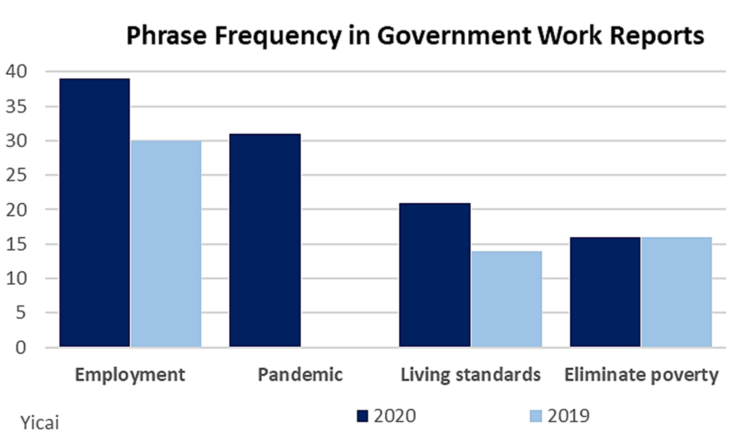 The first is 9 million new urban jobs. The objective for 2020 is quite modest compared to previous years (see graph below). Typically, actual new urban job creation exceeds the government’s target. Thus, we should think of the target as a floor on employment creation. We should expect more stimulus if it looks like 9 million jobs will not be reached. This year through April, 3.5 million new urban jobs have been created. This is down 23 percent from the same period in 2019. Nevertheless, if this pace is maintained for the entire year, 10.4 million jobs will be created (dotted line in the graph below), exceeding the target by 16 percent and keeping the government in its comfort zone. 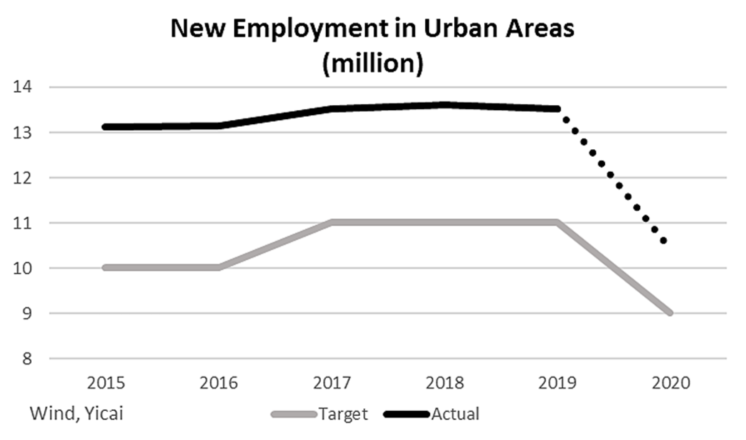 Second, the government is targeting a surveyed urban unemployment rate of 6 percent. Surveyed urban unemployment averaged 5.2 percent in 2019. It jumped to 6.2 percent in February this year. Since then, the monthly readings have been between 5.9 and 6.0 percent. A 6 percent target suggests that the government feels that the worst has likely passed. It represents a ceiling and we should expect more policy support if the rate rises rather than stabilizes or falls.

The third target is the registered unemployment rate of 5.5 percent. The registered unemployment rate is only released quarterly, and it captures a narrower cross section of workers than the surveyed rate. However, it has been around for a long time and the government has been targeting it since the mid-1990s.  This labor market indicator does not move around much and the government targeted 4.5 percent in each of the last 5 years. Notwithstanding all of the dislocation following the outbreak of the pandemic, the registered urban unemployment rate only nudged up to 3.7 percent in the first quarter of the year(dotted line in graph below), up only 0.1 percent from the fourth quarter of 2019. We should see the5.5 percent target as a ceiling as well – one which is unlikely to be breached. 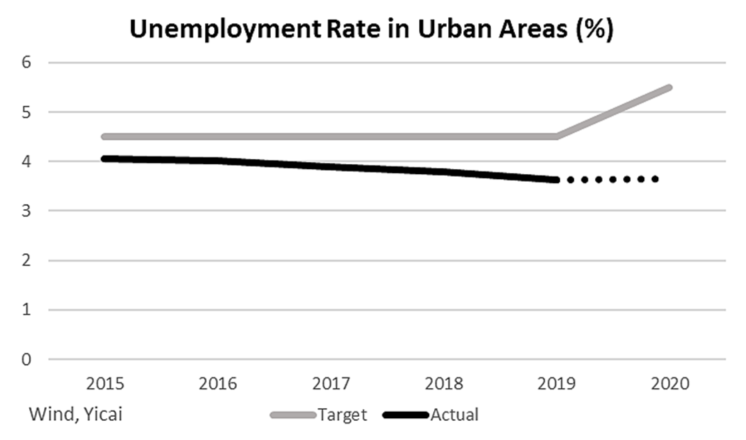 The government intends to stabilize employment through two channels. It will help businesses by cutting taxes and fees, lowering operating costs and increasing financial support. It will also encourage local governments and colleges to hire some of the 8.7 million students who are graduating this year and to provide vocational training.

When it comes to living standards, the government emphasizes health.

In the context of the pandemic, it is not surprising that the government stresses improving public health. It will issue RMB 1 trillion – about 1 percent of GDP – in special Covid-19 bonds. The proceeds of these bonds will go to local governments to reinforce public health systems by investing in vaccines, rapid testing technologies and facilities for epidemic control. The government will also improve basic medical services. It will raise the basic subsidy by RMB 30 per person to RMB 550 and improve inter-provincial settlement of medical bills.

The government pledges to improve the quality of education. It will enhance access to education for rural students and those from poor areas by expanding the number of boarding schools. The Report notes that China has 300 million people living on pensions. It will increase the basic pension for retirees and the minimum basic old age pension for rural and non-working urban residents.

The government intends to eliminate all remaining pockets of poverty this year.

Along with improving the environment and addressing financial risks, poverty elimination was identified by President Xi as one of the “three crucial battles”. The national poverty line is defined as per capita annual income of RMB 2300 at 2010 prices. This would be close to RMB 3000, or $430, today. There were close to 100 million people living in poverty in 2012. By last year, the number had fallen to just 5.5 million (graph below). By both relocating people from inhospitable areas and targeting assistance to poor regions, the government looks to be well on the way to winning this battle. 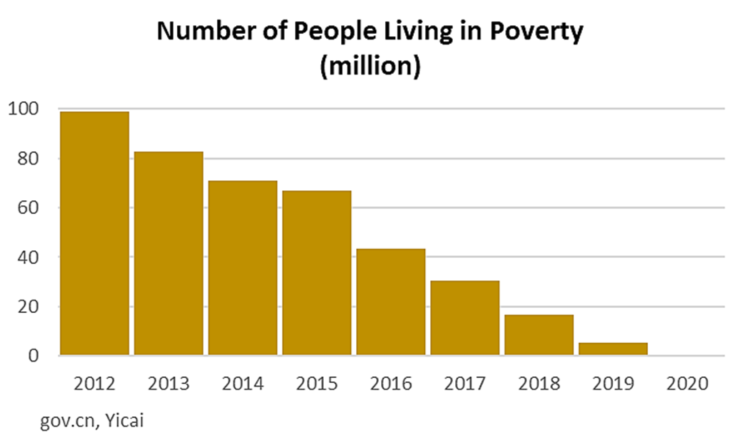 Mark KrugerMark Kruger is Yicai Global's Opinion Editor and Senior fellow to the Yicai Research Institute. He is also a Senior Fellow at both the University of Alberta's China Institute and the Centre for International Governance Innovation. Mark was formerly a Senior Policy Director in the Bank of Canada's International Department, a Senior Advisor to the Canadian Executive Director at the International Monetary Fund and head of the Economic and Financial Section in the Canadian Embassy in Beijing.
Is China’s Recovery Unbalanced and Unsustainable? China’s Economy: The View From the IMF How Sustainable is China’s Debt?