How Does China Keep Covid Under Control? 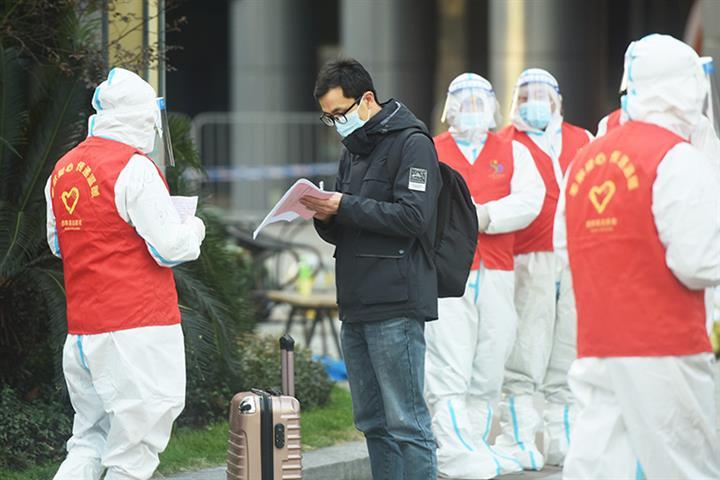 How Does China Keep Covid Under Control?

(Yicai Global) Dec. 24 -- "Our compound has been sealed. There’s a suspected case of Covid. I guess we will all be tested. They’re setting up stations in the garden now."

I got this text late last month from my friend Peter. In the mid-1980s, Peter and I studied Chinese together in Tianjin. While I returned to Canada after completing my studies, Peter has remained in China for the last three and a half decades. He is a true “Old China Hand”.

With the Omicron Variant causing renewed anxiety around the world about our ability to control the spread of Covid, I thought it might be instructive to tell Peter’s story. It is a good example of how China’s zero-tolerance Covid policy works in practice. The approach taken in Peter’s compound is basically the same as currently used in Xi’an, where the discovery of roughly 150 cases resulted in the city of 13 million being locked down.

China has been very successful at keeping Covid under control. Death rates here are well below what we see elsewhere in the world.  There have been close to 1.7 million Covid-related deaths in the EU and US. Despite having almost twice as many people as the EU and the US combined, China has only recorded some 5700 deaths (Figure 1). China’s zero-tolerance policy has kept the infection rate very low. If we look at cumulative infections divided by population, we see that 15 percent of the American and 11 percent of the European populations have contracted Covid. In China, only one one-hundredth of one percent has. 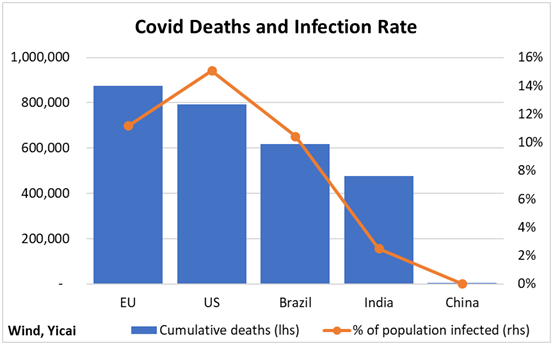 The data for China are so out of line with those of the other major economies that many of the people I speak to back home simply refuse to believe them. But China’s performance is understandable. It is the result of the zero-tolerance policy, which has been consistently much more restrictive over the last two years than policy in the US or the EU.

Figure 2 shows the “Containment and Health Index” calculated by the Oxford Covid-19 Government Response Tracker.  The Index combines 13 metrics covering lockdown restrictions, testing policy and contact tracing. The higher the score, the more stringent the policy. From January 1, 2020, to date, the Index for China averaged 71. This compares to 58 for the US and 63 for the simple average of France, Germany and Italy. 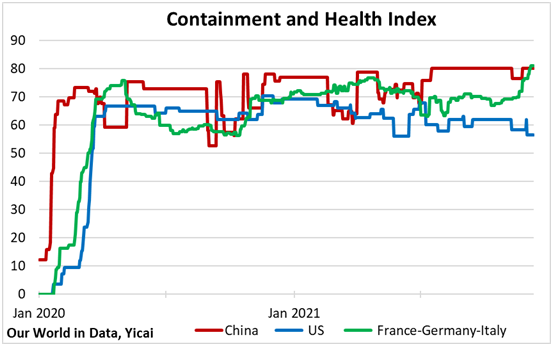 It is worth emphasizing that China has done a good job of vaccinating its population. The data show that 83 percent of Chinese people have received two doses of a Covid vaccine, compared to 69 percent in the EU and 61 percent in the US (Figure 3). While a more effective vaccination program is certainly part of the story, as Peter’s experience illustrates, what sets China apart is how quickly the authorities act once a case has been discovered. 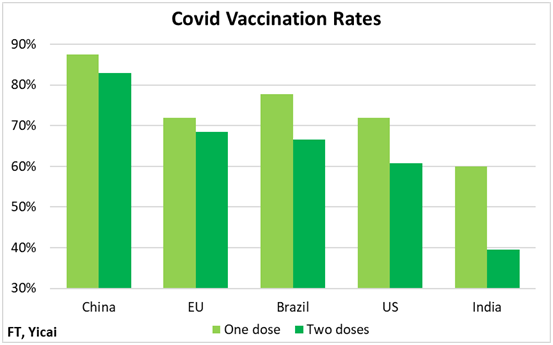 Last week, after having been under lockdown for 14 days, the residents of Peter’s compound were released and allowed to move freely around Shanghai. Peter met me for lunch and told me about his experience.

“Our compound was sealed, along with two others in Shanghai. Across the whole city of 24 million, a total of three cases had been found,” explained Peter.

Peter lives in a large compound in Shanghai’s fashionable Century Park district. His compound houses its 1790 residents in more than 30 high-rise apartment buildings. Peter said that the woman in his compound who was infected didn’t even live there. She simply rented one of the apartments, Airbnb-style, for a single evening before having tested positive.

“Those who lived in the block where she stayed were confined to their apartments,” said Peter. “The rest of us were allowed to move about the compound, but we were not allowed to leave it. In fact, there were police cars stationed at all the main gates to make sure we stayed inside.”

Peter was able to make the best of a bad situation. He had his laptop and was able to work from home. Having lived in China for so long, Peter could easily navigate Shanghai’s e-commerce ecosystem. Still the situation seemed somewhat surreal. “Every day I went to the main gate, wearing my mask, to collect the meals and supermarket provisions that we ordered on line. They were handed to us by masked workers in their protective clothing. After a while, I began to feel like an extra in a sci-fi film,” he said.

The compound’s other residents also did what they could to make their predicament pleasant. Many set up tents in the compound’s extensive gardens and enjoyed the clear, sunny late-November weather. “I had fun meeting my neighbours,” said Peter. “I’ve become WeChat friends with quite a few of them.”

There were some who were caught off guard by the lockdown. They didn’t have such a great time. “There was one American guy who happened to be jogging around the compound’s grounds when the gates were shut. All the poor guy had was his jogging suit. The compound’s administration gave him a bed in the back of their offices for the two weeks, but it was hardly ideal accommodation.” 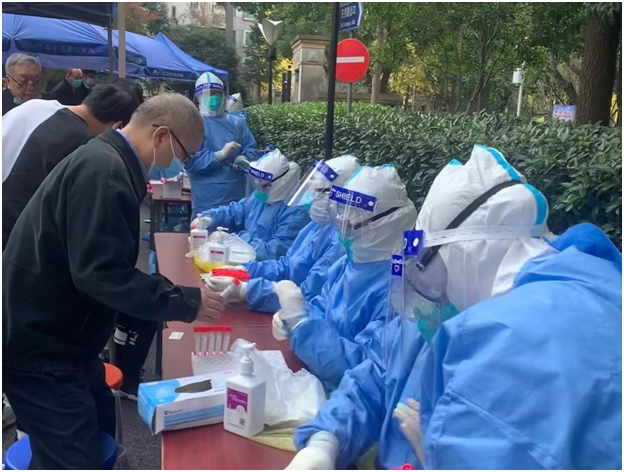 By the seventh day, the residents of Peter’s compound had been tested three times. Peter said that the testing procedure was run very efficiently and it even enlisted the help of some of the residents’ children as volunteers. All of the residents consistently tested negative.

The fourth and final test was scheduled for between 6 and 8 AM on the fourteenth day. But, on the evening of the thirteenth day, the residents of Peter’s compound were informed that the testing would be moved forward to 1 AM. “It was quite something to see everyone – young kids and old people – out in the middle of the night, standing in a queue that snaked through the compound. But folks were calm – and friendly.”

This is, perhaps, the secret to China’s success in containing Covid. Around the same time that Peter’s compound was sealed, there were huge anti-lockdown protests across Europe with demonstrations in Austria, Belgium, Croatia, Italy, France and the Netherlands. While it certainly is disruptive to be kept at home for two weeks, Chinese people seem to take it all in stride. They understand that controlling Covid is a cooperative enterprise. And that we are all in this together.