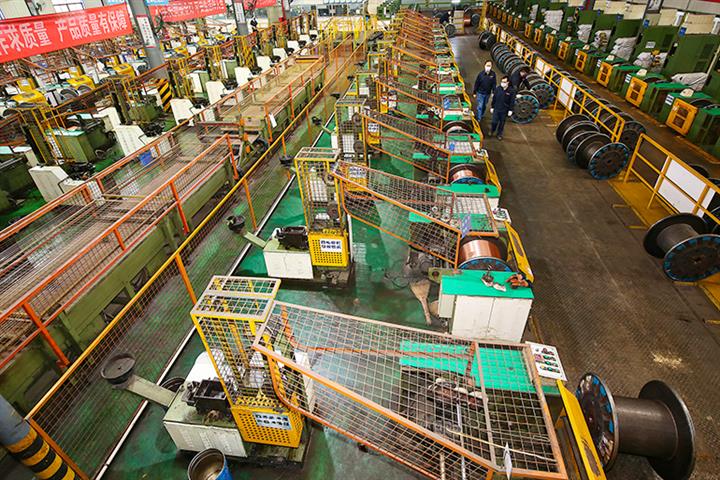 (Yicai Global) April 20 -- It is difficult to interpret China’s National Accounts for the first quarter of 2021. The pandemic had its greatest economic impact a year earlier. The crater the virus left in the GDP data inflates the readings this year, making year-on-year comparisons misleading. So, while the National Bureau of Statistics (NBS) says that GDP rose by an eye-popping 18.3 percent year-over-year, the economy was not nearly as strong as it appeared.

Thankfully, the NBS also reports GDP growth on a quarter-over-quarter basis. With the economy essentially having returned to equilibrium in the fourth quarter of 2020, this number, 0.6 percent, is not infected by the virus. But 0.6 percent is not a strong number. It works out to 2.4 percent at annual rates. In 2019, the average quarter-over-quarter growth rate was just over 1.4 percent (5.8 percent at annual rates).

While China has done a great job at managing Covid-19, a minor outbreak had a major effect on the economy in the first quarter this year.

Figure 1 shows that between September and December 2020, there were about 20 new infections per day. In late January 2021, new infections spiked to 120. It could not have happened at a worse time. Hundreds of millions of Chinese people were getting ready to travel home for the Lunar New Year celebration. 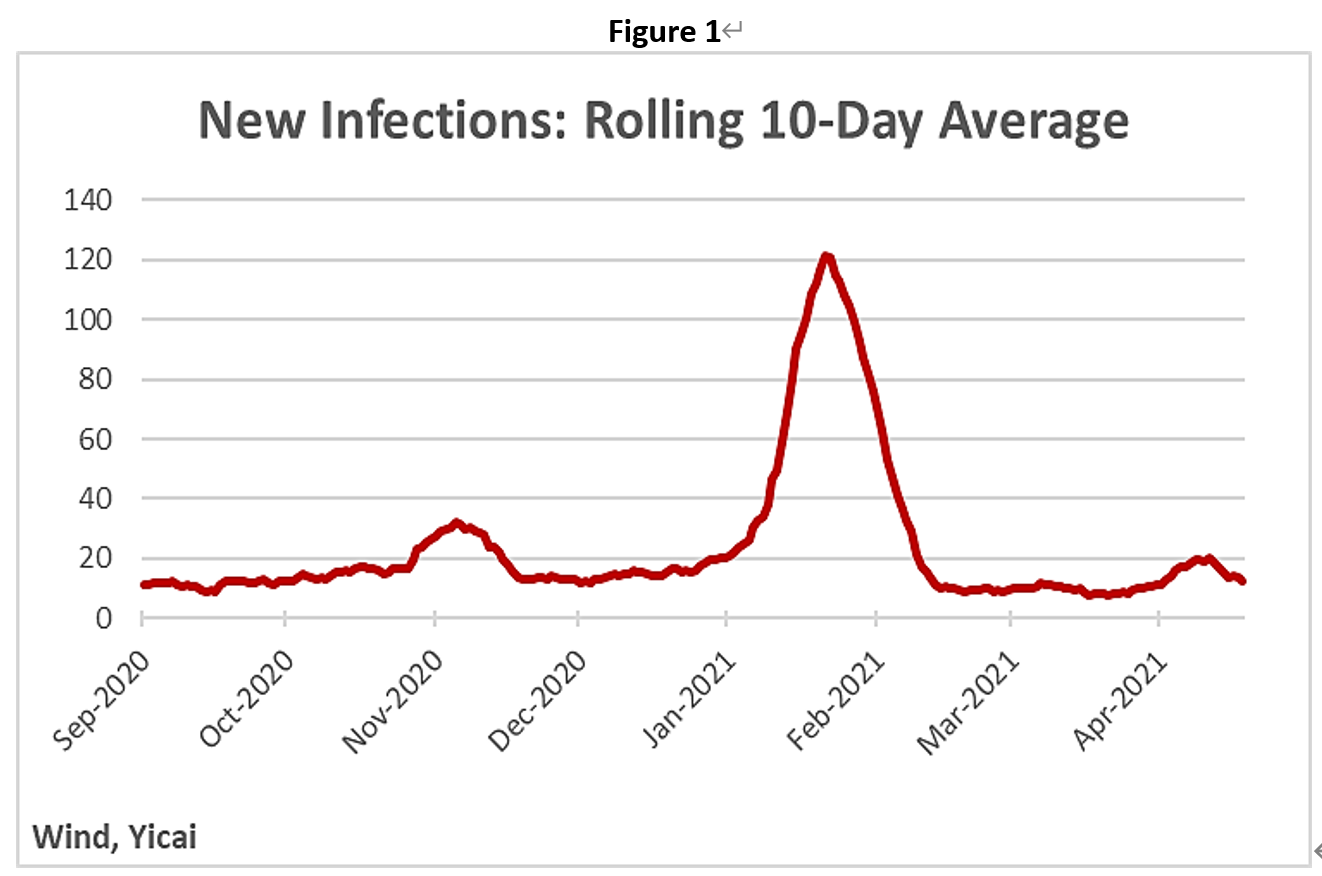 To prevent the disease from spreading, the government imposed restrictions on travel. At the national level, all that was required was a negative Covid test. Some local officials, who may have lacked the resources to deal with a widespread outbreak of infection, imposed an additional 14-day quarantine requirement. For many would be travellers, this made returning home impossible.

Figure 2 shows that there was a modest rebound in the number of tourist trips and the amount of holiday spending from their very depressed 2020 levels. Nevertheless, this year’s holiday season was far from normal. In fact, had tourists spent as much this year as they did to welcome the Year of the Pig (in 2019), it would have added another 1 percent to quarter-over-quarter growth. This would have been enough to bring it back to the recent trend. 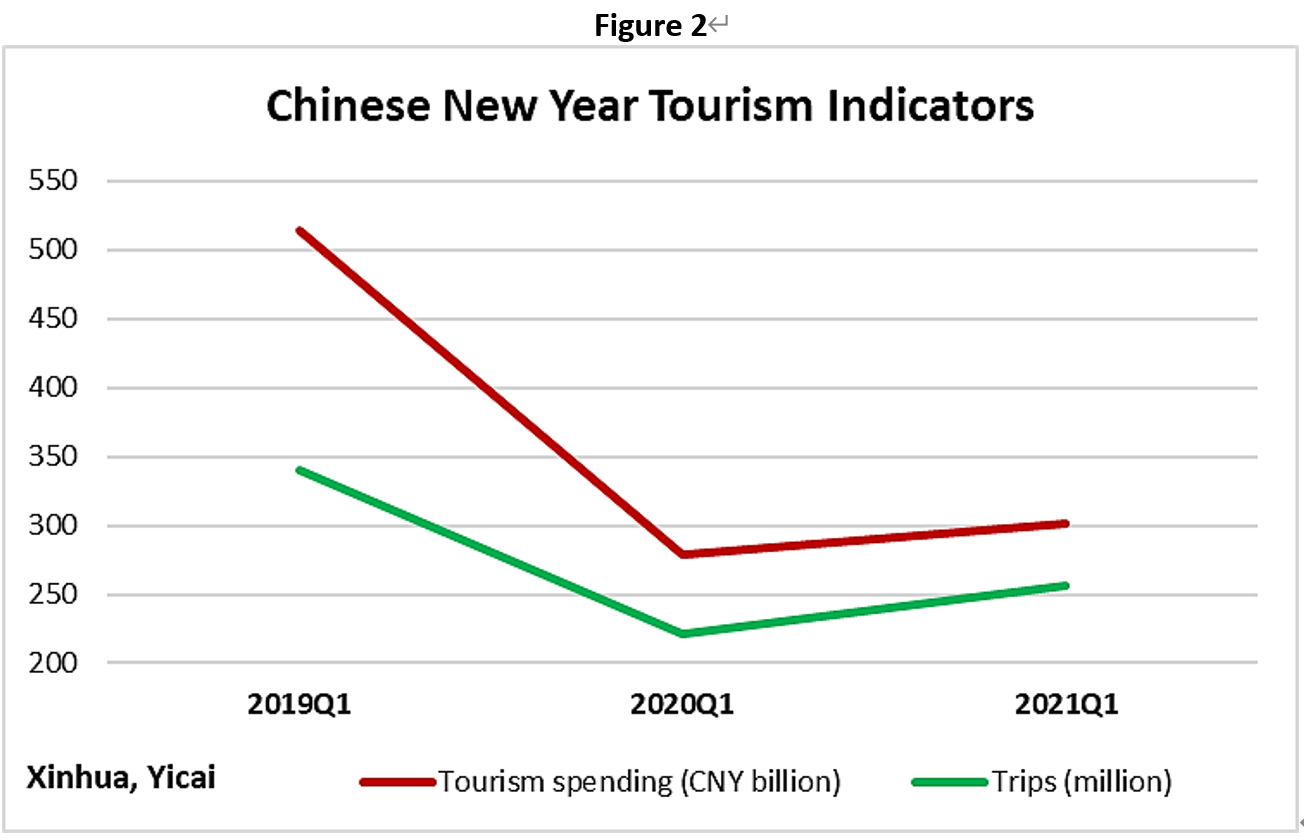 Chinese tourists remained cautious in the second quarter this year as well. During April’s Qing Ming (Tomb Sweeping) Festival, travel was still down about 5 percent from pre-pandemic levels. Chinese diners are becoming more relaxed about eating out. Perhaps this indicates that we will see travel return to normal during next month’s Labour Day holiday.

The good news is that, aside from tourism, the economy looks strong.

Figure 3 shows the month-over-month growth of retail sales. The dip in January was likely related to the spike in infections. Sales in February and March were much stronger than average monthly sales growth in 2019. 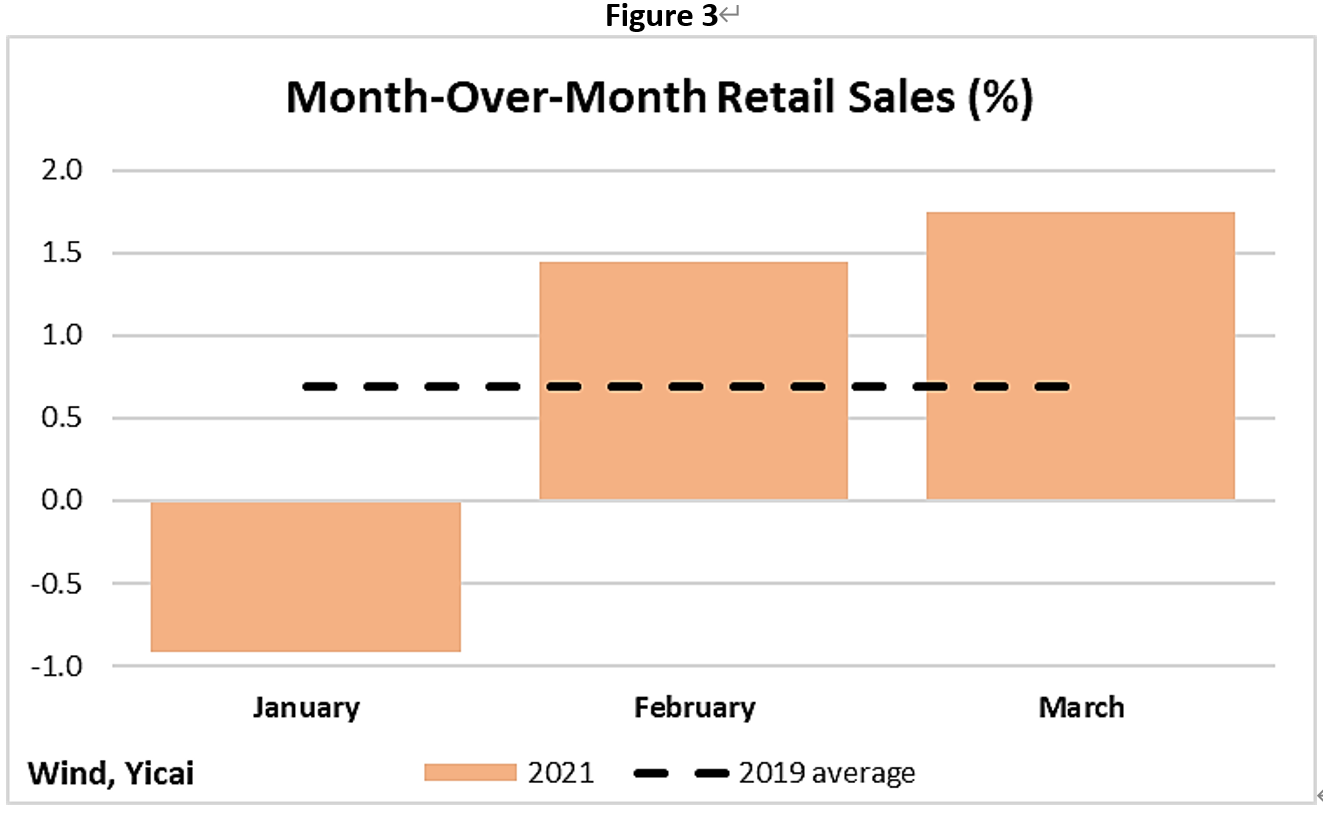 Investment seems particularly robust, with month-over-month growth in the first quarter three times higher than the 2019 average (Figure 4). Investment by private firms grew more rapidly than that of their state-owned counterparts, suggesting that business confidence is strong. 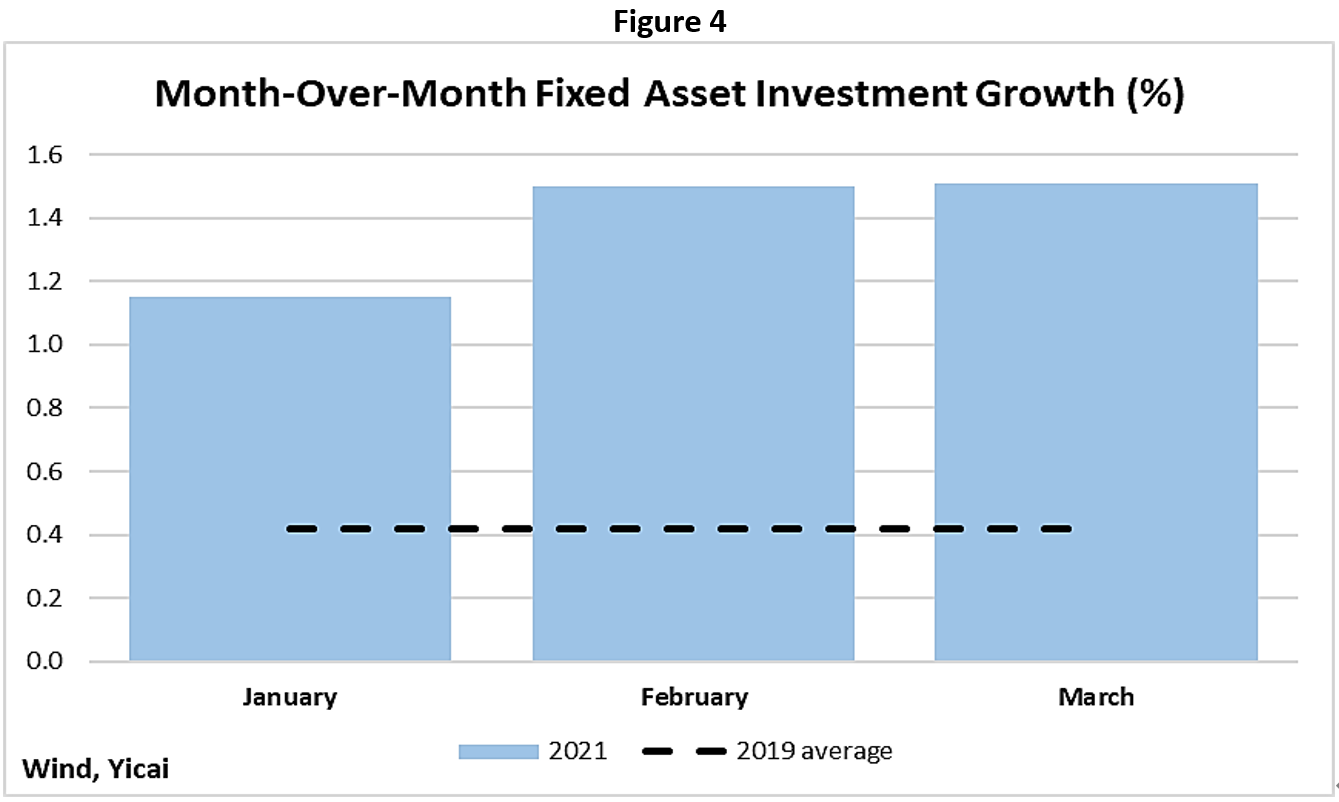 There were about 2.5 million fewer migrant workers employed in the first quarter than in 2019Q1 (Figure 5). Migrants’ wages rose by 14 percent in Q1, bringing them back to trend, and suggesting that migrant workers are in short supply. This is consistent with the findings of an NBS survey of 90,000 firms, who reported that recruitment was the biggest challenge they faced and one which has grown over time.

Tight labour markets and rising wages will put pressure on Chinese firms. However, higher wages will help underpin household consumption and stimulate improvements in productivity – both of which are objectives of the 14th Five Year Plan. 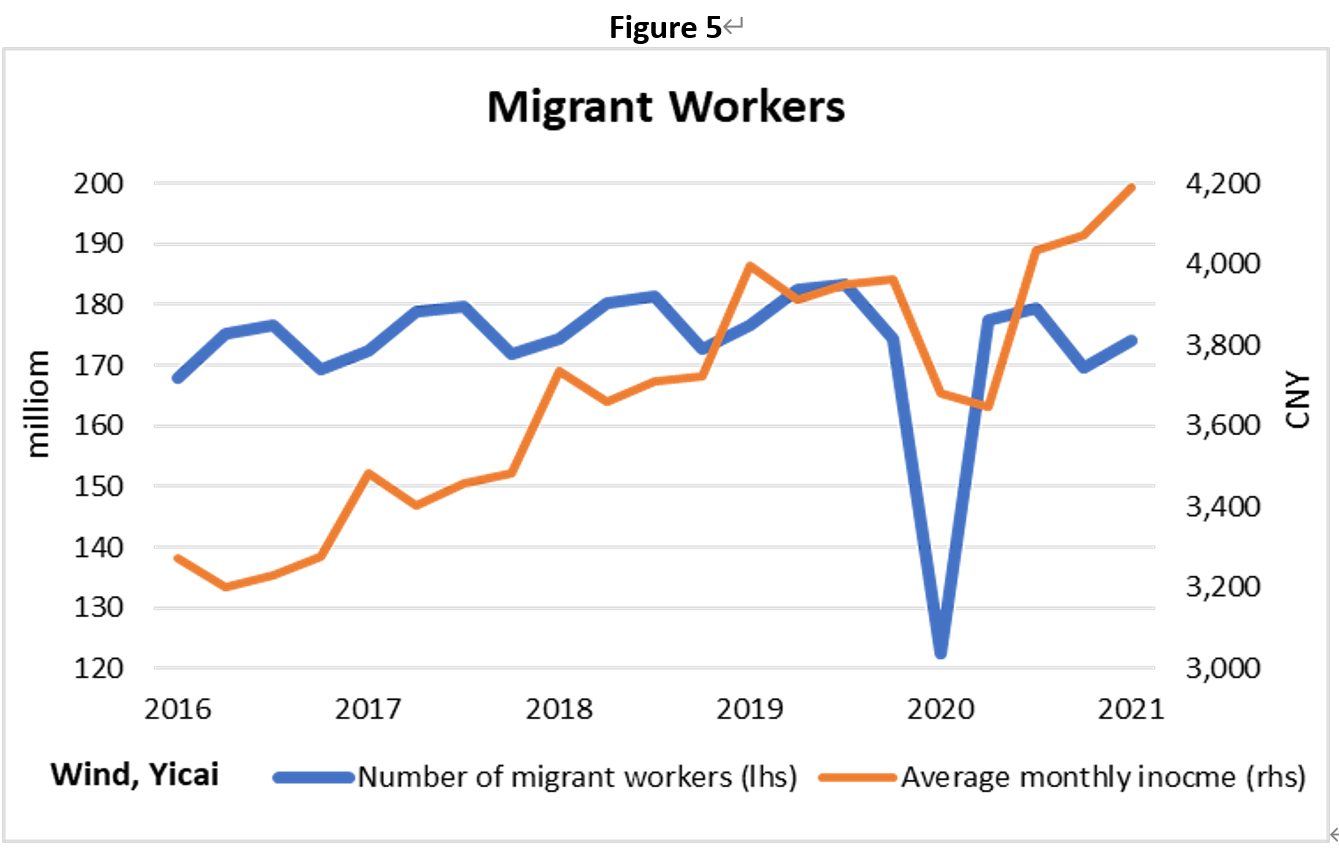 Both exports and imports were strong in the first quarter (Figure 6). To abstract from the weakness a year ago, we can compare them with their 2019Q1 levels. Over the two years, exports grew at an average rate of 13 percent, while imports rose by 11 percent. While import values are somewhat inflated by higher commodity prices, imported volumes of oil, iron ore and soybeans are all significantly higher than two years ago, suggesting strong domestic demand. 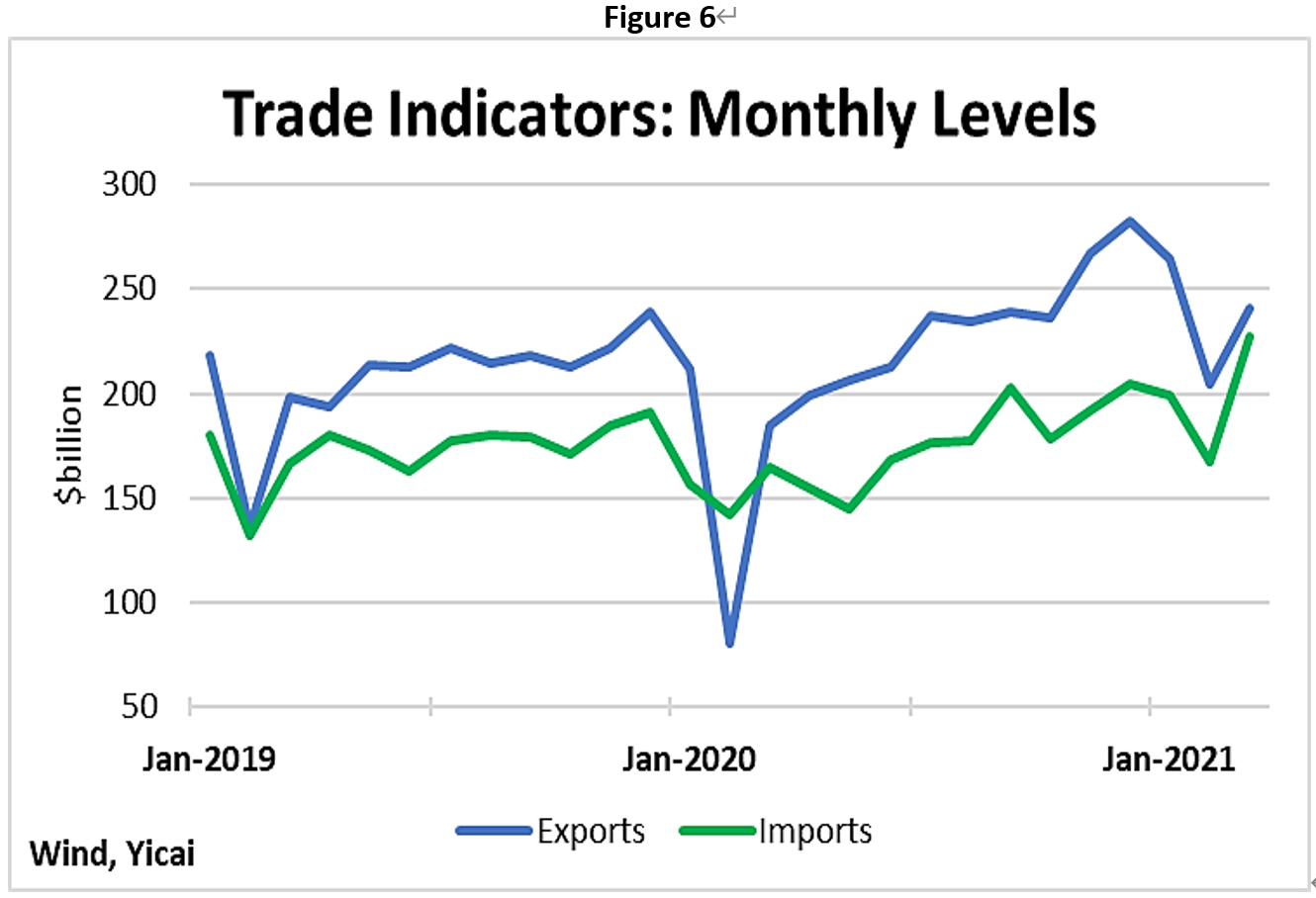 Where do we go from here?

The weakness in the first quarter was concentrated in tourism. With infections falling to less than 20 per day and with the steady rollout of vaccines, we should see a pick up in quarter-over-quarter growth to a rate consistent with the economy’s potential (5.5-6 percent). Quarterly growth in the next three quarters should be close to the 2019 average of 1.4 percent (Figure 7). Should this forecast materialize, growth for the year as a whole would come in at 9.2 percent.

There are both upside and downside risks to this forecast.

On the downside, we could see another wave of the virus. And trade tensions could escalate. Upside risks arise from a potential spillover of the US’s massive fiscal stimulus to China and the possibility that a greater than expected number of my friends and neighbours will join me in leaving home and exploring China this May. 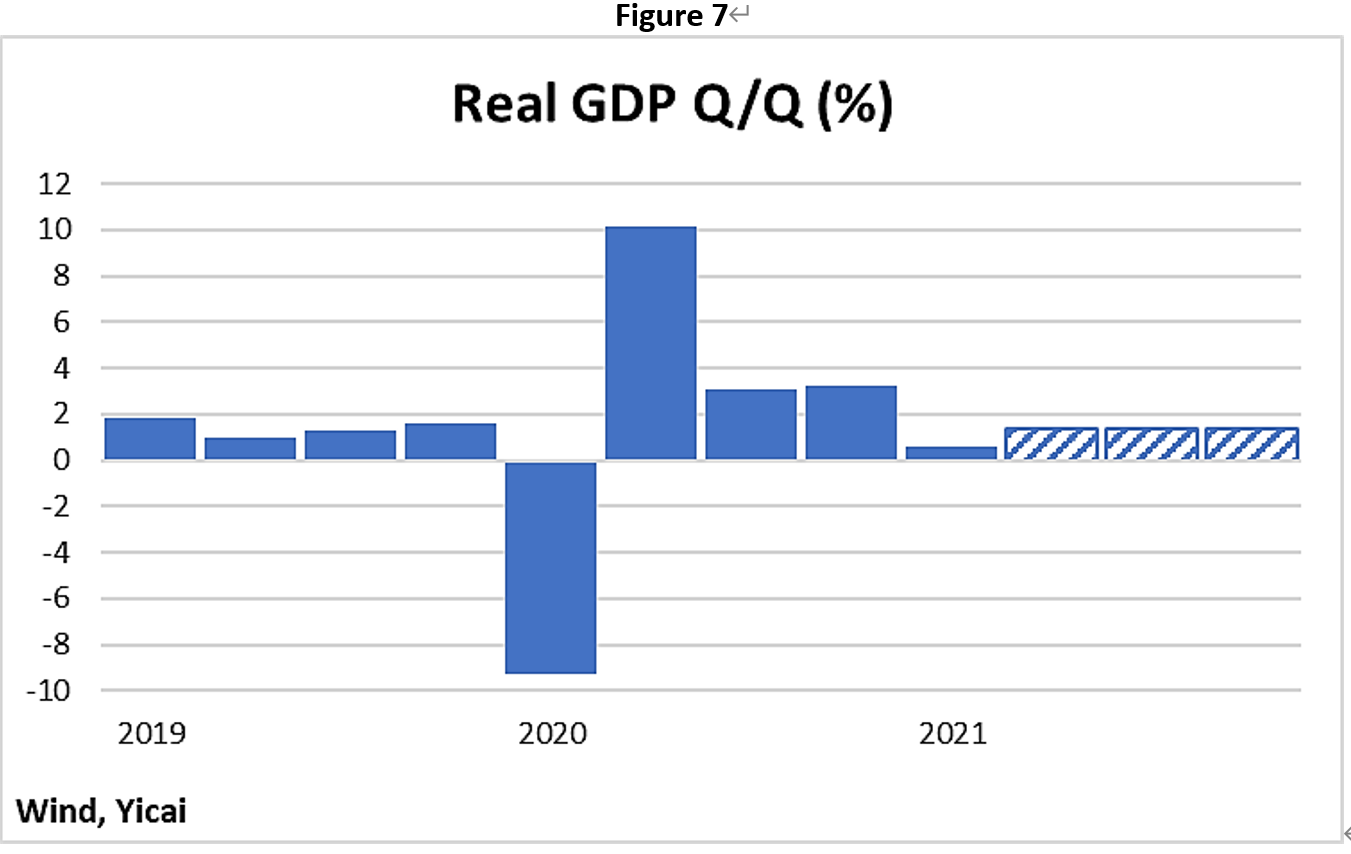