Is China’s Recovery Unbalanced and Unsustainable? 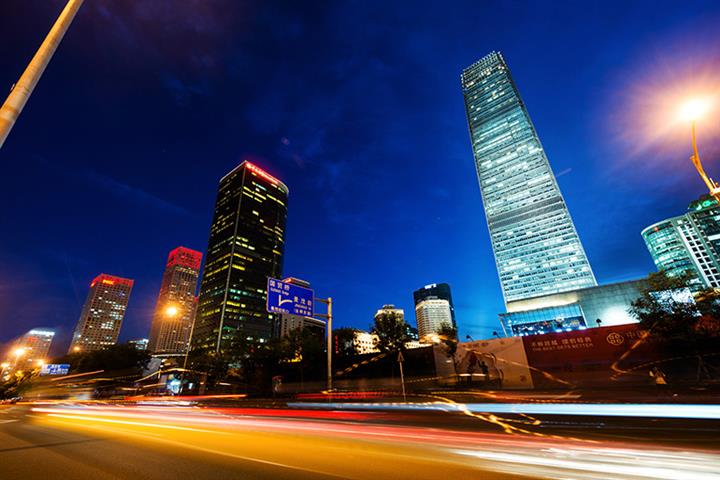 Is China’s Recovery Unbalanced and Unsustainable?

(Yicai Global) Jan. 21 -- On January 18, China’s National Bureau of Statistics (NBS) released the National Accounts for the fourth quarter of 2020. It reported that year-over-year growth for the quarter and the year as a whole came in at 6.5 and 2.3 percent, respectively. These data show that China’s economy has fully recovered from the effects of the pandemic. Moreover, economic momentum accelerated as the year ended, suggesting a strong start to 2021.

To appreciate the trajectory of China’s economy, let’s go back a year – to January 20, 2020 and the publication of the IMF’s updated World Economic Outlook. You will not find the words “pandemic” or “COVID-19” in this document. It was the Fund’s last, pre-pandemic projection.

From the Fund’s forecast, we can trace out its projection for the level of real GDP in 2020. This is shown as the dotted line in Figure 1. The green line shows the actual level of real GDP, along with the realized growth rates.

The key take away here is that the amount of GDP China produced in the fourth quarter was essentially the same as the IMF’s pre-pandemic projection. In other words, the economy has fully recovered from the ravages of the pandemic. It is hard to understate this achievement, given the sharp decline in Q1 and the contraction of China’s trading partners’ economies. 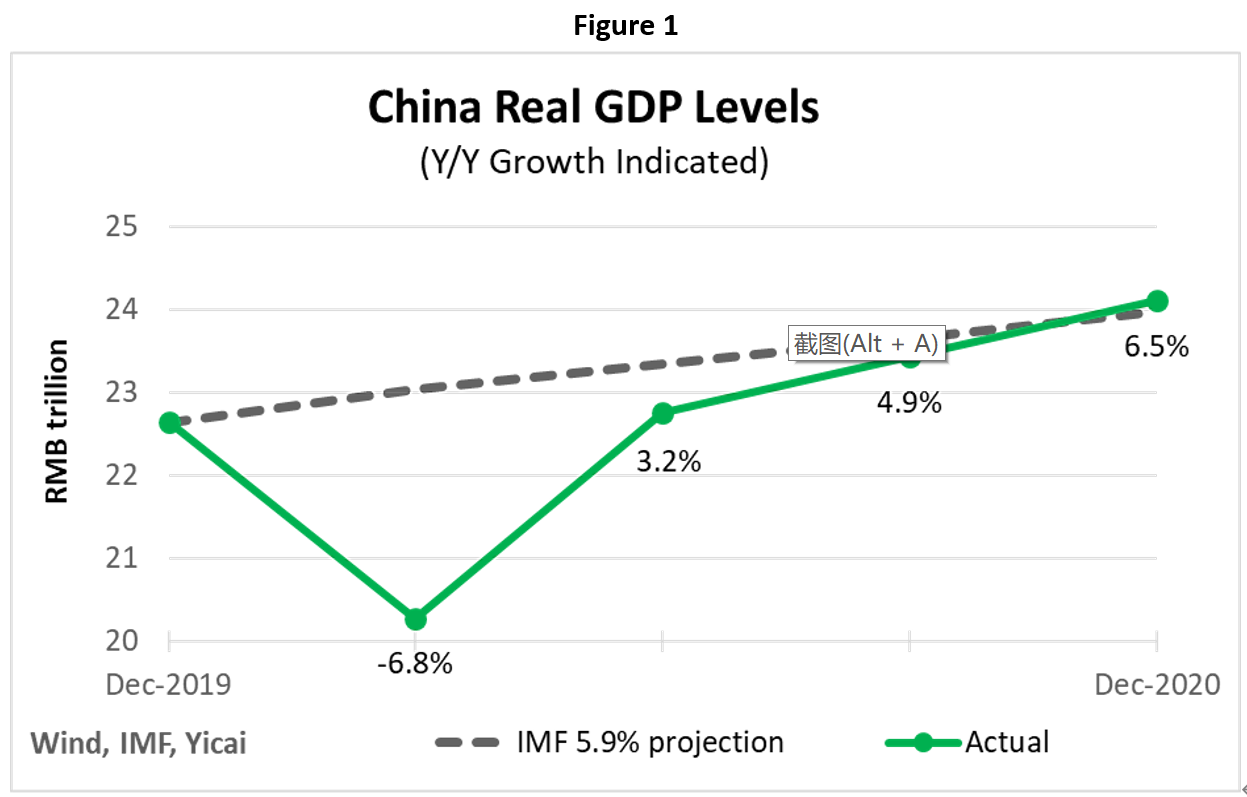 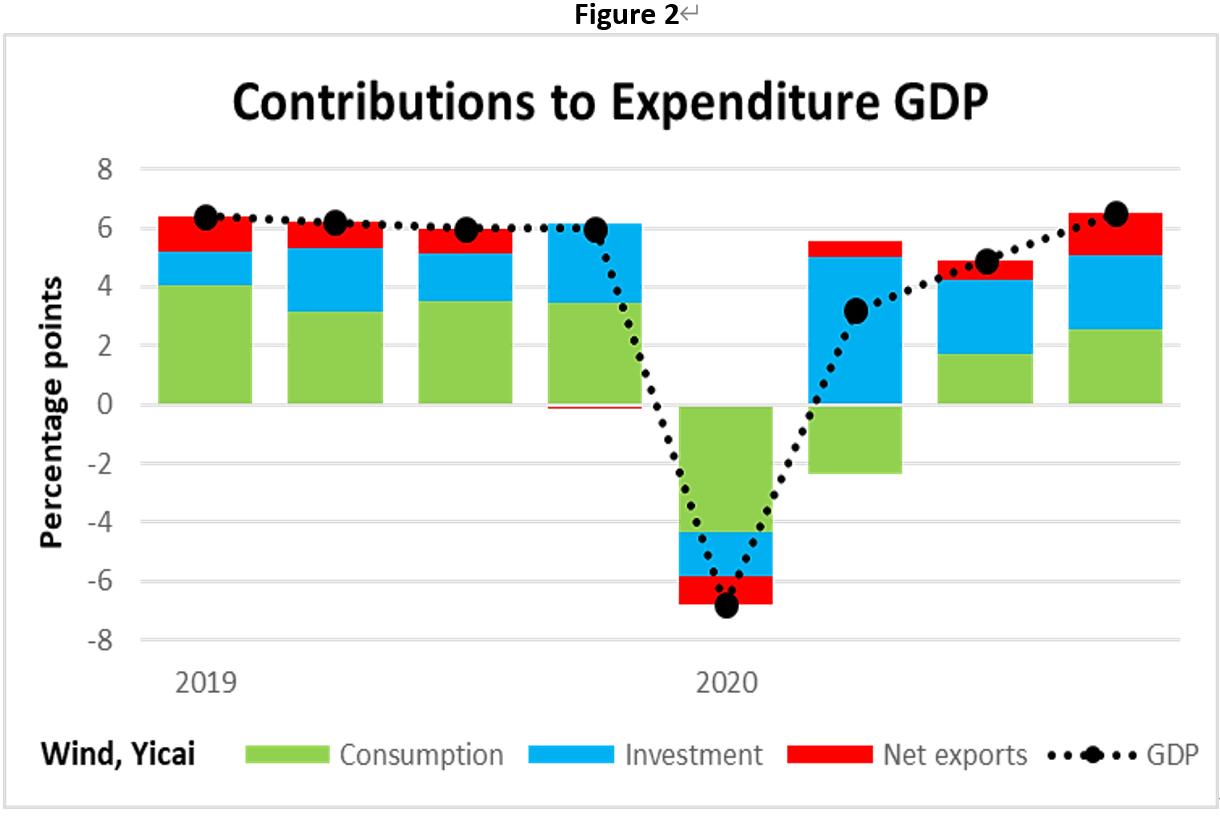 Many foreign analysts have stressed the unbalanced nature of China’s recovery and imply that the rebound is not sustainable.

I think they miss the point.

A careful, quarter-by-quarter reading of the evolution of the economy reveals that it was, indeed, knocked off balance by the pandemic in Q1; that policy supported the recovery in Q2 and Q3; and that growth became increasingly balanced by year end.

Let’s examine the three components of demand one by one.

The key economic effect of the pandemic has been to reduce person-to-person contact. Data from the US are particularly illustrative on how this affects consumption – although this story applies across a number of economies, including China’s. 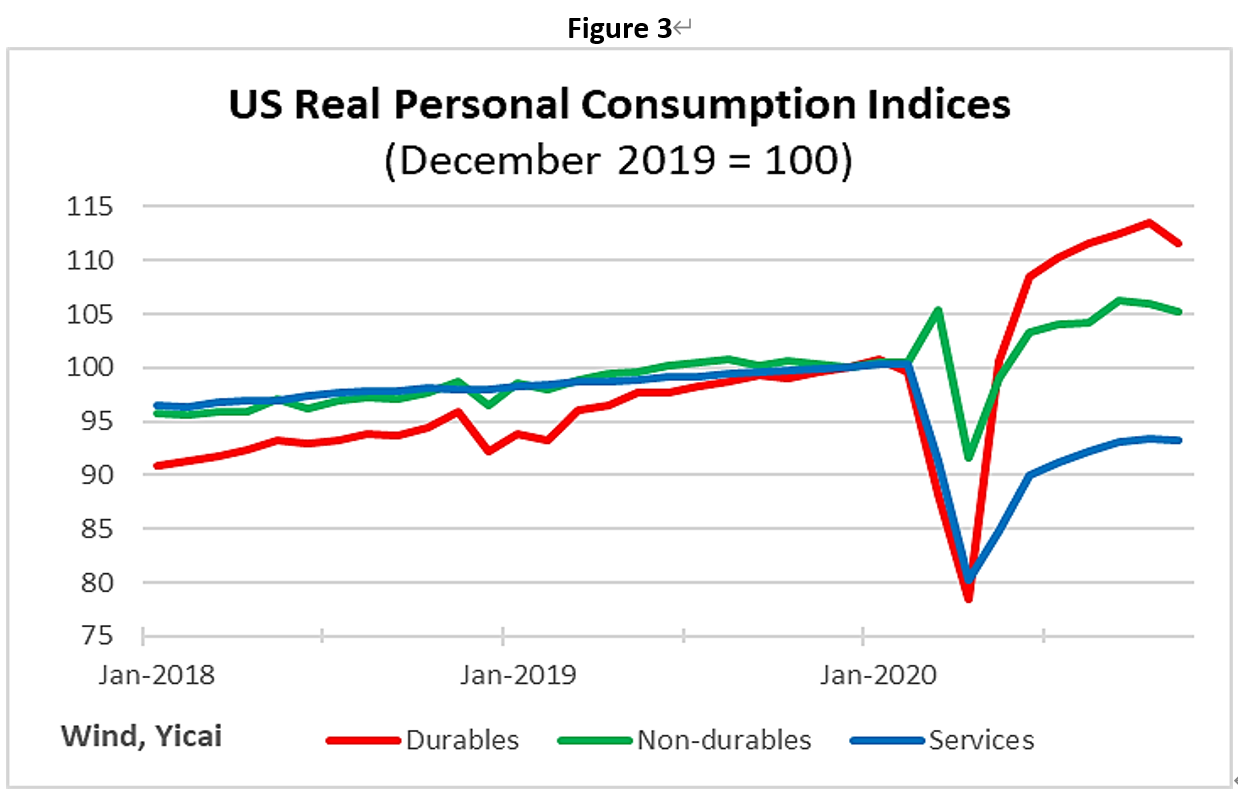 Where can Americans find all the additional durable goods they want? Many of them are imported or produced domestically with imported components. But not every economy has its supply chains up and running and can meet this demand.

China appears to be unique in this regard.

Figure 4 shows merchandise export volume indices through October. The difference between China’s ability to export and that of the rest of the world is striking. Chinese merchandise exports are up close to 15 percent from January 2019. Those of the rest of the world are 2 percent lower and seem to only slowly be heading back to their pre-pandemic level.

The shift in the composition of foreign consumption from services to tradable goods and China’s ability to be export-ready is a key reason why the trade balance kept hitting new highs in Q4 and the economy grew so rapidly.

With the pandemic far from under control outside of China, it is reasonable to expect this dynamic to continue playing out through early 2021. There is a risk, however, that the pandemic is pulling Chinese exports forward and that, having already gone on a shopping spree, consumers’ demand for China’s durable goods will be weak in the second half of the year. 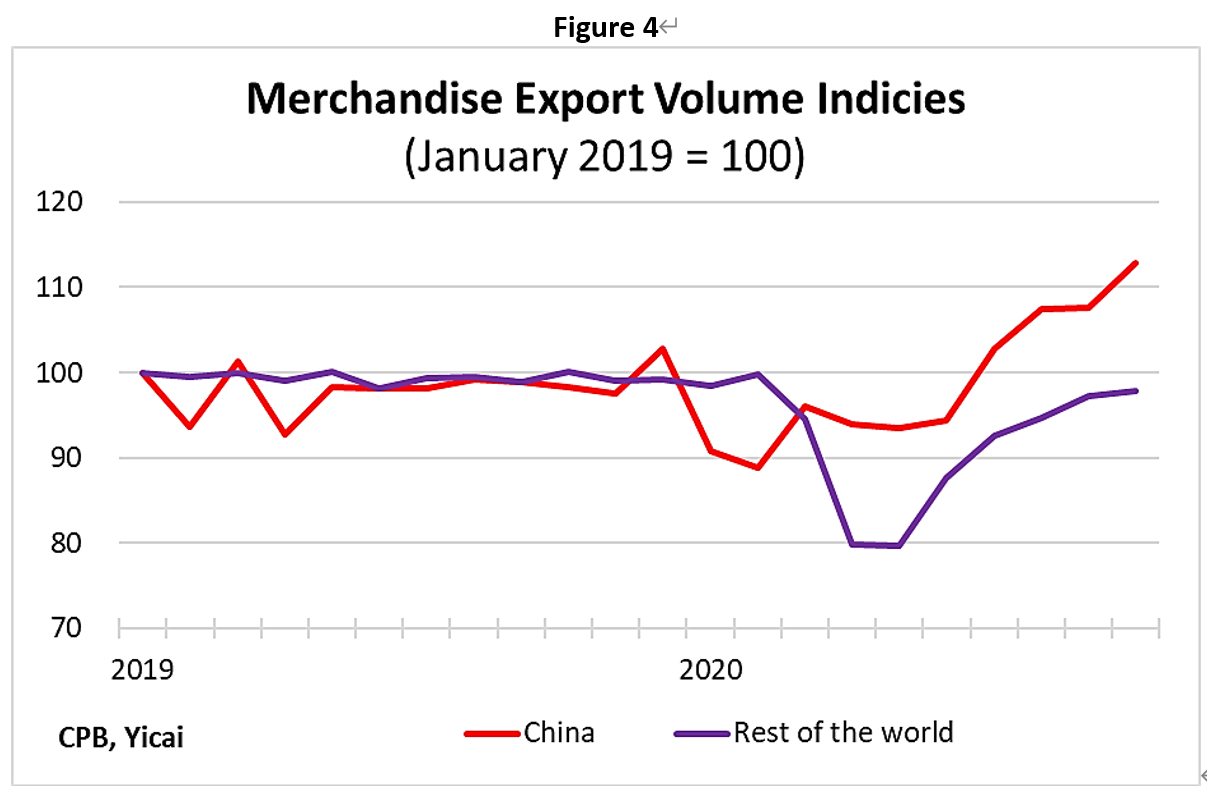 China’s investment spending has remained very robust, even as the economy has fully recovered. Figure 5 shows that the month-over-month growth in fixed asset investment averaged 2.6 percent in Q4. This is understandably slower than the rapid rates recorded earlier in the year, when the economy was climbing back from the massive drops in January and February. Given that monthly investment growth only averaged 0.4 percent in 2019, it appears investment will be carrying a lot of momentum into 2021. 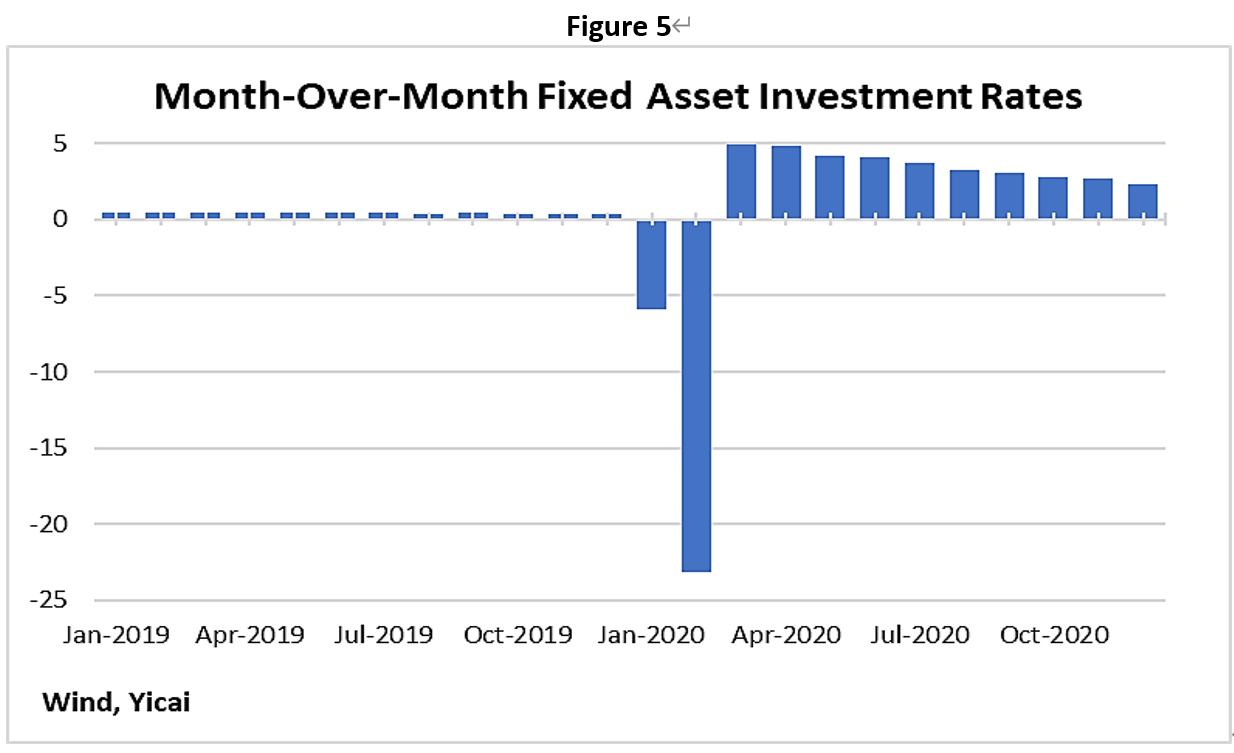 The composition of investment shows encouraging signs of confidence among entrepreneurs. Investment in manufacturing and investment by private firms accelerated in Q4. This suggest that the conditions are in place for the government to scale back policy support.

Household consumption strengthened significantly in Q4, although it continues to be the weakest demand component. Figure 6 shows that, after falling in each of the first three quarters of the year, real household expenditures rose in Q4. However, at 3.8 percent year-over-year, the growth of household consumption was much slower than that of GDP.

Robust real disposable income growth (+6.6 percent) was one factor in getting households to spend again. Reduced uncertainty was another. In the first three quarters of the year, a rise in unemployment and uncertainty over the economy’s prospects led to a sharp rise in savings. In Q4, the household savings rate returned to a level only slightly higher than seen last year. 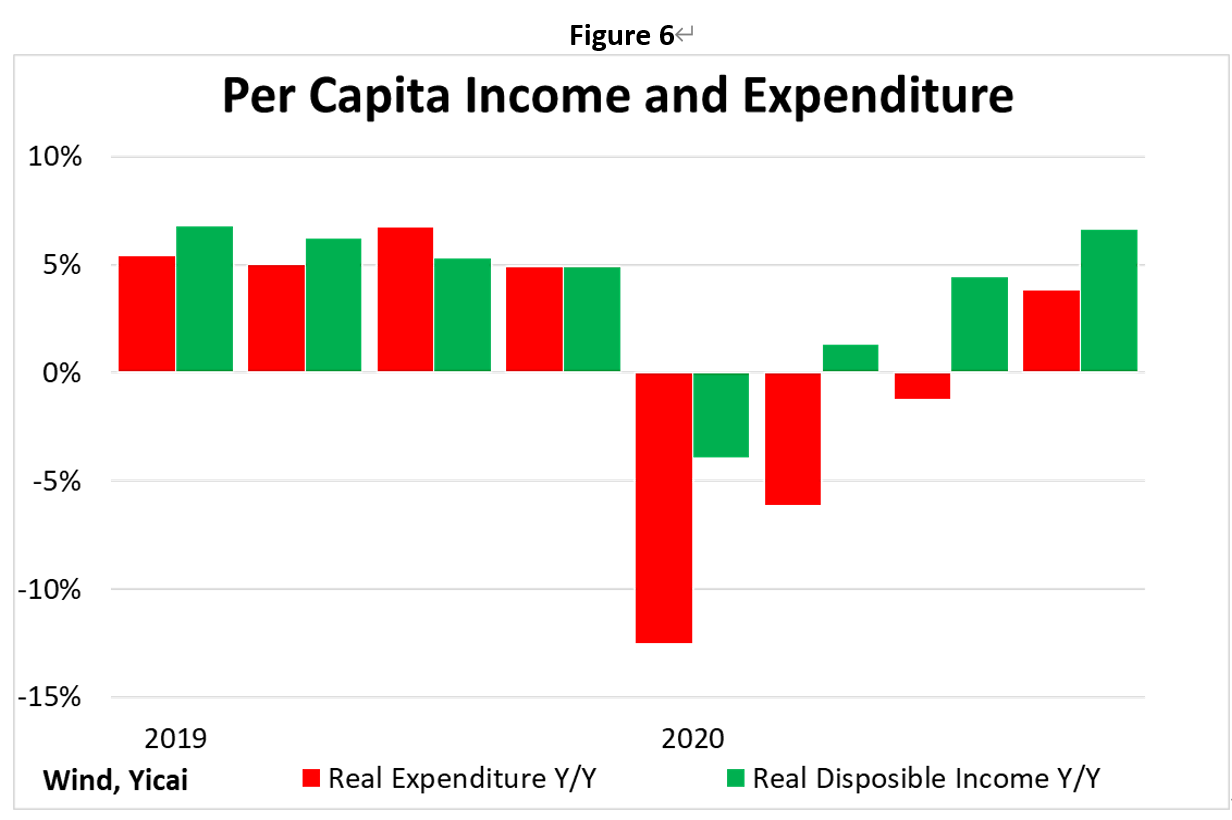 Our Monthly Indicator (Figure 7) shows that the economy’s momentum gathered steam as the year ended. Both industrial value added and the index of service production grew in excess of 7 percent in December. This too suggests a strong start to 2021. 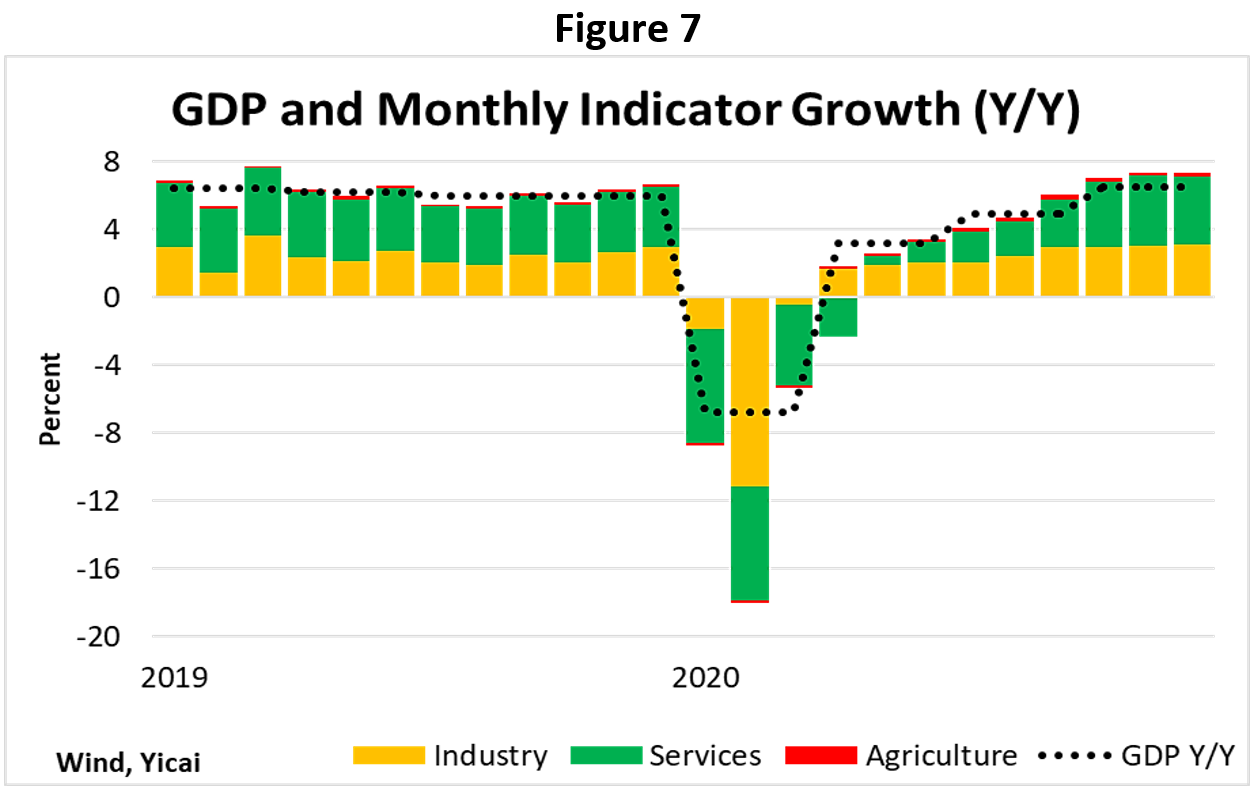 I continue to see the economy growing at close to 10 percent this year.

The Biden Presidency will usher in a reduction in cross-border tensions, which will help dissipate trade and investment uncertainty. Around the world, the gradual rollout of vaccines, will make managing the pandemic easier. Chinese macroeconomic policy will gradually withdraw support and will return to reining in financial risks.

From my perspective, the prospects for balanced and sustainable growth in 2021 look pretty good.