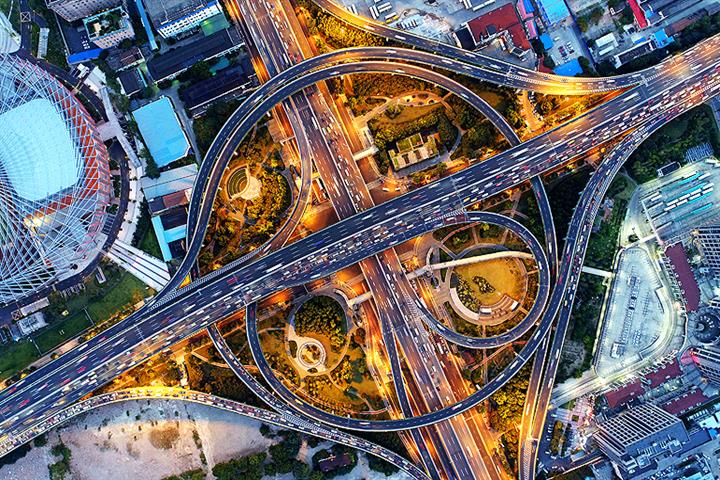 (Yicai Global) Dec. 30 -- With the year coming to an end, economists’ eyes are turning to 2021 and their minds are busy assessing just how fast the Chinese economy might grow. Helpfully, Nikkei and Nikkei Quick News recently surveyed 35 prominent economists. These economists, including some of the best foreign and domestic China watchers, expect GDP growth to reach 8.2 percent next year.

While it is entirely possible that the economy might grow this quickly, I think Nikkei’s group is too pessimistic. Here’s why.

The relatively rapid rate of growth economists see in 2021 can be decomposed into two parts: (i) the trend growth rate of the economy and (ii) the base effect.

From the questions Nikkei asked the economists it surveyed, we can get a sense of what they think the economy’s trend growth in 2021 will be. The economists see the fourth quarter of 2020 and the full year of 2022 growing at 5.9 percent and 5.4 percent respectively. A simple linear interpolation suggests that the trend growth rate of the economy in 2021 would be in the 5.6 percent range.

Given these estimates and noting that growth was 6.0 percent in the fourth quarter of 2019, we can trace the quarterly level of underlying GDP as the red line in Figure 1. 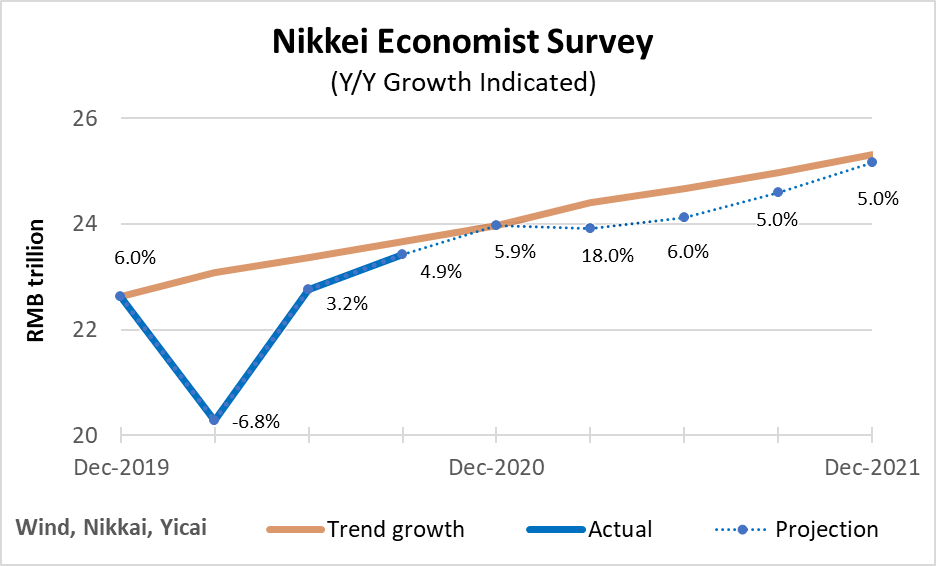 The “base effect” on GDP growth arises from the economy’s very sharp decline in 2020Q1 and its very quick rebound in the remainder of the year. This leaves the projected level of GDP at year end much higher than 2020’s annual average. The base effect means that even if the economy remained at its 2020Q4 level through out 2021, annual growth would still be 6 percent next year.

But the economists surveyed by Nikkei do believe that the economy will continue to grow on a quarterly basis. From the questions asked, we cannot be sure exactly what the economists’ quarterly profile is. Nevertheless, the blue dotted line in Figure 1 presents a candidate projection, which is fairly smooth and gives us annual growth of 8.2 percent.

Notice that the economists’ “Projection” diverges from “Trend growth” in the first quarter of 2021 and (almost) rejoins it in the fourth quarter. The point is: to have growth as low as 8.2, the economists have to build in a cycle during which actual Chinese GDP slows with respect to the trend rate.

From where we are in late December 2020, a mid-year slowing next year is certainly possible. However, it is not clear why the economists would forecast one ex-ante. Most economists expect a steady improvement in economic conditions both in China and abroad as 2021 progresses, especially as the vaccines are rolled out more broadly.

We assess the economy’s trend growth, by performing a supply-side add up using a Cobb-Douglas production function. The detailed assumptions in this analysis are taken from our previous research. In this framework, the economy’s potential is determined by the growth of the labour supply, the productive capital stock and total factor productivity (TFP).

Let’s begin with the evolution of China’s labour supply. The economically active population is shrinking, and overall employment began to fall in 2018. We forecast that this decline will accelerate (Figure 2), in line with the UN’s projections for China’s working age population. 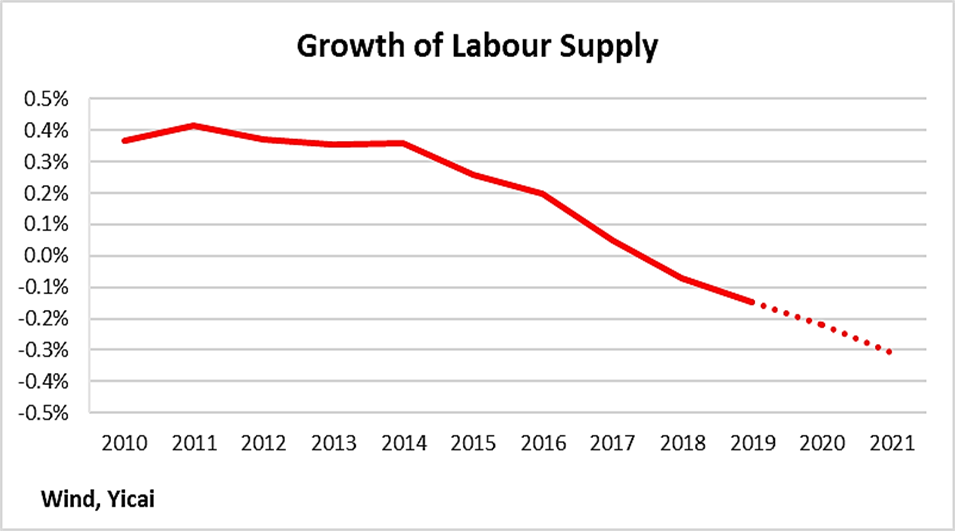 The growth in China’s productive capital stock peaked in 2010 at 12 percent, as a result of the massive fiscal support undertaken in the face of the global financial crisis. More recently, the growth of the capital stock has slowed, in part, due to the deleveraging program, which is designed to rein in financial risks.

Based on the information received to date, it appears that the growth of the capital stock plateaued in 2020, as policy turned to helping the economy withstand the effects of COVID-19. In 2021, we estimate that the growth of the productive capital stock will continue to decline, as real gross fixed capital formation ex-residential real estate falls back to its 2019 growth rate. 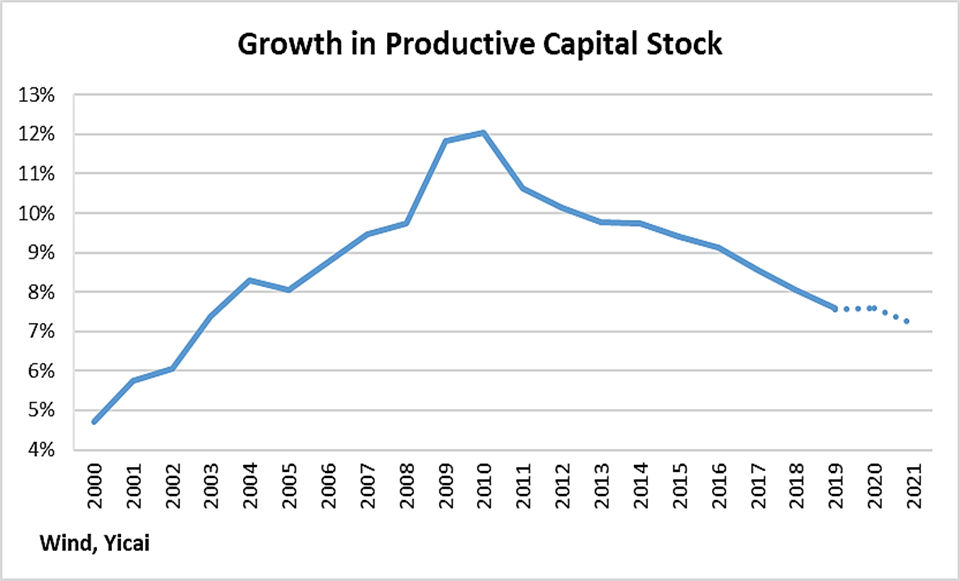 Through 2017 and 2018, TFP growth showed encouraging signs of recovering from its 2015-16 lows. In 2019, TFP decelerated again, likely as a result of the trade tensions. With the election of Joe Biden, we expect a more favourable external environment, which should support a rebound of TFP growth in 2021 (Figure 4). 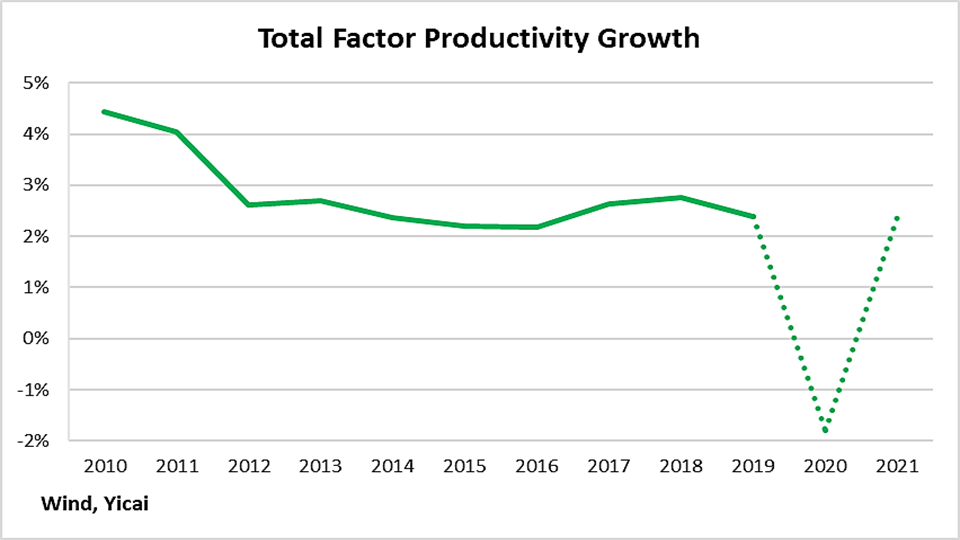 Figure 5 shows the add up of China’s supply-side drivers. It suggests that trend growth should be around 5.8 percent in 2021. However, due to the base effect, measured GDP growth next year will be quite a bit higher. 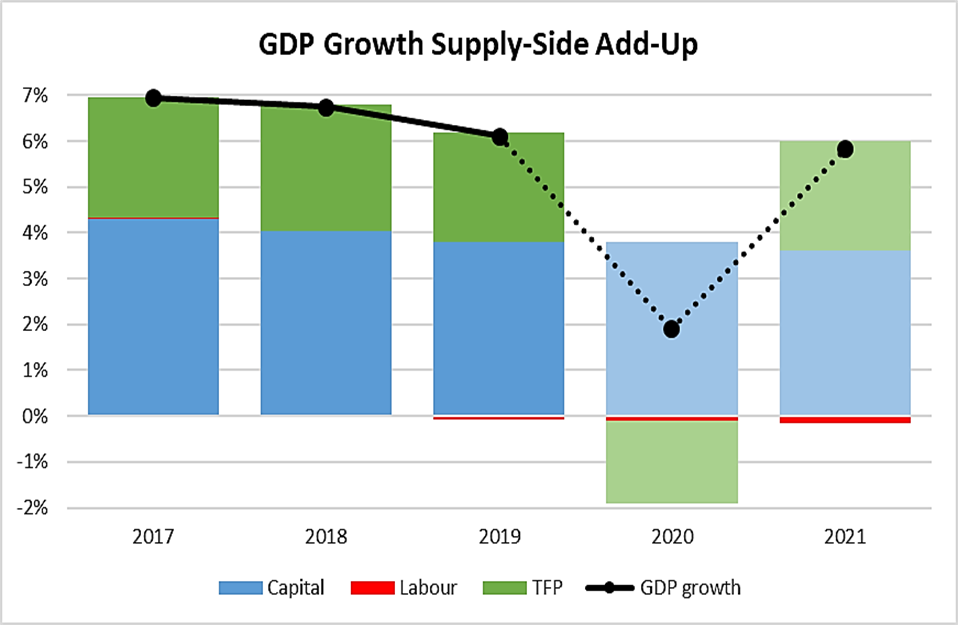 The profile for our forecast is presented in Figure 6.  The very strong data we received for October and November suggest that growth in this year’s fourth quarter could be in the 7 percent range. This would bring the level of GDP slightly above trend. Thereafter, the level of GDP grows in line with its 5.8 percent trend. This profile implies growth of 2.1 percent in 2020 and 9.8 percent in 2021. 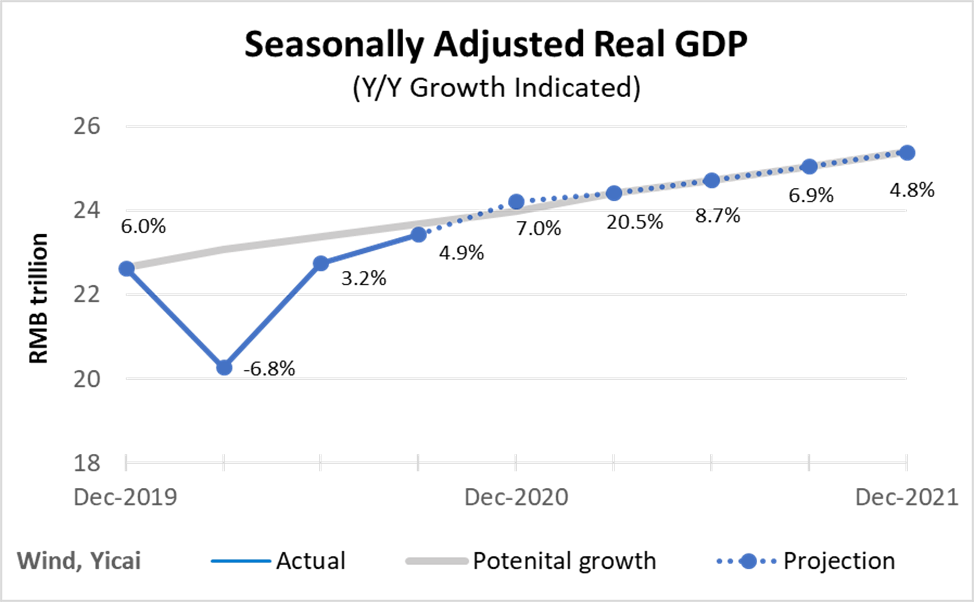 Growth approaching 10 percent may sound “too high” for China. Indeed, it would be the fastest the economy expanded since 2010. But we need to remember the role of the base effect.

In terms of round numbers, the economy’s trend growth is around 6 percent. In 2020, it experienced a temporary slowdown due to the virus and only grew by 2 percent, 4 percentage points below trend. By the second half of 2020, the economy had returned to the level of activity it would have had, even if there had been no virus-related slowdown. In 2021, it continues to grow at the 6 percent trend and “recaptures” the 4 percentage points it lost, for growth of 10 percent.

While our forecast of close to 10 percent growth in 2021, is significantly higher than that of the economists surveyed by Nikkei, we are not the only ones who are so optimistic. Capital Economics, an independent research firm out of the UK, also sees the Chinese economy growing at around 10 percent next year.

No matter how fast the Chinese economy does grow, we hope that 2021 is a year in which all your wishes come true! As we say in Shanghai, 元旦快乐，万事如意!