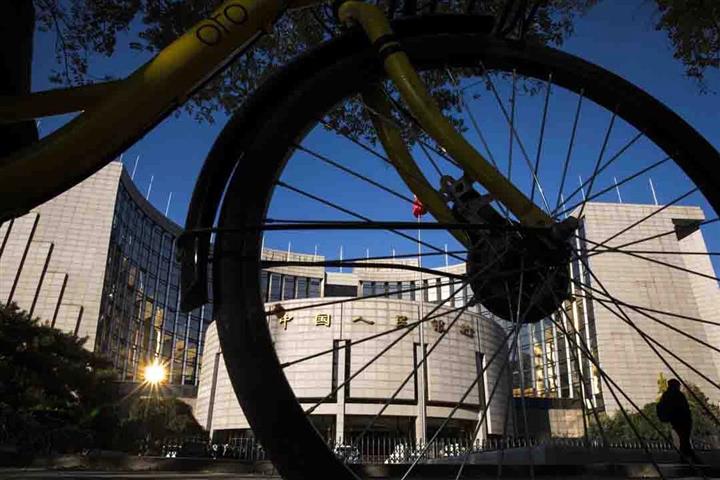 (Yicai Global) Dec. 17 -- On December 15, China’s National Bureau of Statistics (NBS) released its macroeconomic numbers for November. The data were very strong, suggesting the economy is building significant momentum as it approaches the end of the year.

Figure 1 presents our indicator of monthly GDP growth. It is a weighted average of the NBS’s industrial value added and service production data and our estimate of the value of agricultural output.

Our Monthly Indicator accelerated to 7.3 percent in November, up 0.3 percentage points from October. The strength in recent months has come from the service sector. Now, both services and industry are growing faster than they did in 2019, indicating the recovery is not only picking up steam but becoming more balanced too. 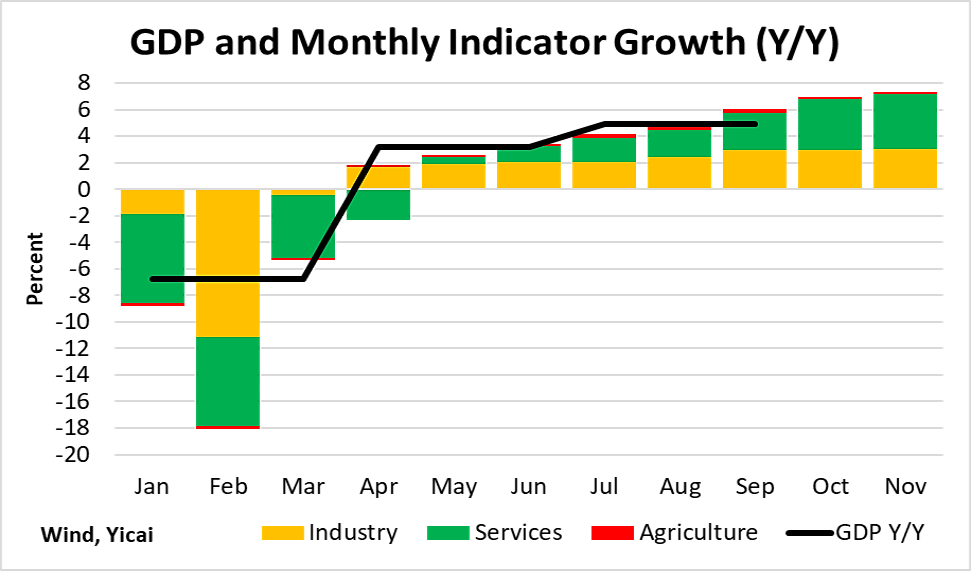 The data we received in the last two months point to GDP growth in the fourth quarter that could very well exceed 7 percent. That’s more than two percentage points faster than the Q3 outturn. It now appears that growth, for the year as a whole, will easily exceed 2 percent.

The momentum we are seeing is unexpected. We would have thought that the economy would slow as it fully recovers, closes the output gap and returns to a 6 percent growth path. However, the data show that growth is actually accelerating.

The industrial sector most clearly illustrates this momentum. The solid green line in Figure 2 is an index of industrial output. We set it to 100 in January 2019. The green dotted line shows what the index would have looked like in 2020, if there had been no virus-related slowdown and if the sector had grown at its average 2019 rate (6.3 percent). The lines meet in October. We estimate that this was when the industrial sector fully made up its lost ground.

The red bars in Figure 2 show industrial value added’s month-over-month growth rates. I have cut off the extreme values recorded in January-April. The key here is that even though the sector was “back to normal” in October, its monthly growth rate in November was 1 percent. This is close to twice as fast as its 2019 average. In all likelihood, December will be another strong month and it looks like the economy will begin 2021 in a robust position. 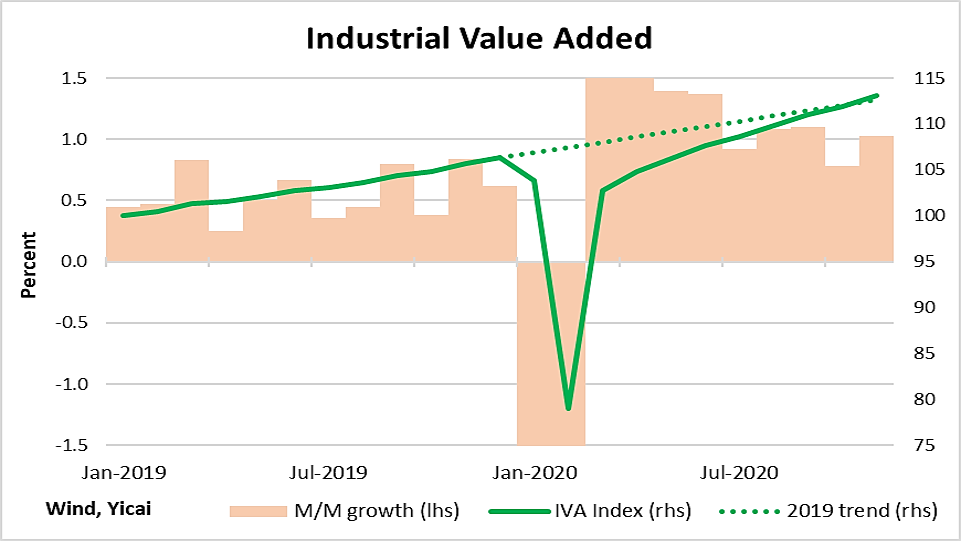 The economy’s momentum can be explained by increasingly vigorous domestic demand and changing consumer preferences overseas that benefit China’s exports.

China’s strong domestic demand is most clearly reflected in the sales volume of residential real estate (up 11 percent year-over-year) and passenger cars (+12 percent). Retail sales of goods are up 6 percent in inflation-adjusted terms. In August, they had been down 1 percent.

Catering sales continue to be weak. Indeed, they declined by 0.6 percent year-over-year (in nominal terms), following modest positive growth in October. A small rise in new domestic COVID cases may have spooked those who would have otherwise dined out.

The Chinese economy is also benefitting from increased overseas sales. November’s exports were up 21 percent year-over-year, in dollar terms, pushing the trade surplus to a record USD75 billion.

Figure 3 compares China’s exports in November 2020 to those a year earlier. It shows that the growth came from the US and “other” countries, as exports to the EU, ASEAN and Japan only rose modestly in dollar terms. 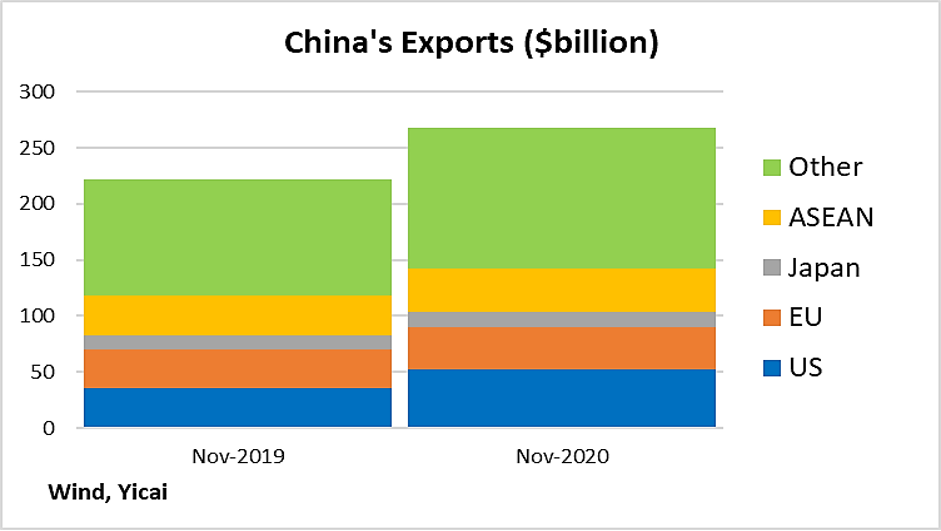 Even though consumer demand is weak in China’s trading partners, preferences are changing in a way that is benefitting Chinese exporters. While the detailed data are most readily available for the US, it is likely that the same phenomenon is occurring in other countries as well.

Given that China exports durables and that the virus-related damage to its supply chains has essentially been repaired, it has been able to translate these changing consumption preferences into increased export sales. 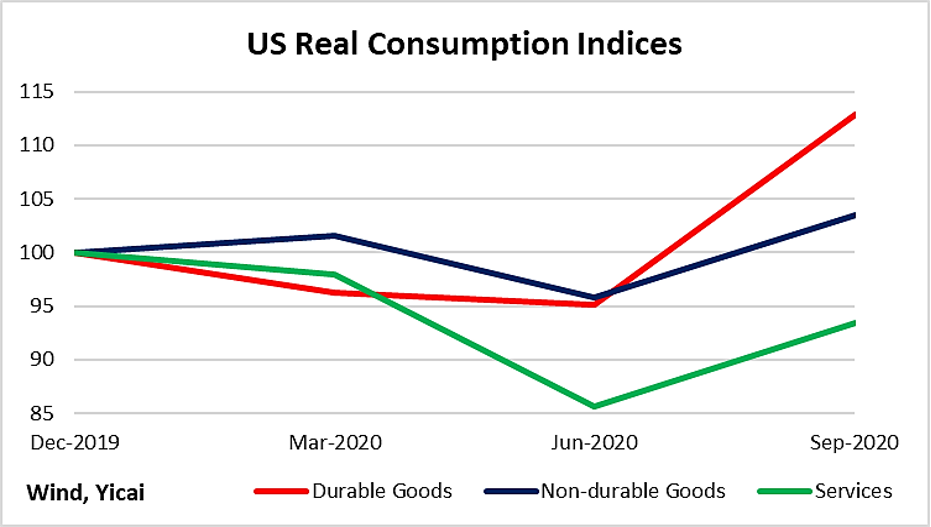 The economy’s strength poses a dilemma for China’s central bank.

Monetary policy is still very accommodative. Broad credit growth exceeded 13 percent in November. Short-term interest rates have dipped recently and remain well below their 2019 average. While the exchange rate has appreciated against the US dollar, it has been broadly stable against a basket of China’s trading partner’s currencies.

On the one hand, core consumer price inflation has been running at a paltry 0.5 percent for the last five months. This does not suggest tighter policy is needed.

Similarly, the labour market is now basically back to where it was prior to the COVID outbreak. There does not appear to be especially strong demand for labour that would translate into sharply higher wages and cost-push inflation.

On the other hand, debt levels have increased as a result of efforts to support the economy and loose monetary policy only facilitates greater leverage in the future.

Moreover, the PBOC may be concerned about asset prices, in particular property prices. Figure 5 shows that the prices of apartments in China’s 100 largest cities respond with a four-month lag to the imbalance between sales and construction.

Figure 5 shows that property prices are not currently out of control. Still at 4.3 percent year-over-year in November, they are up 1 percentage point from September and history suggests further increases should the sales-construction imbalance persist.

However, the PBOC may feel that monetary policy may be too blunt a tool to apply to the housing market.

Policymakers may, instead, prefer to use targeted macroprudential measures. Indeed, the authorities in Xi’an – where the rise in real estate prices has been particularly sharp - recently increased the down payment needed for second home purchases.

In the context of strong economic momentum, should the PBOC take a wait and see approach to monetary tightening, it might be a good time to consider investing in Chinese equities. 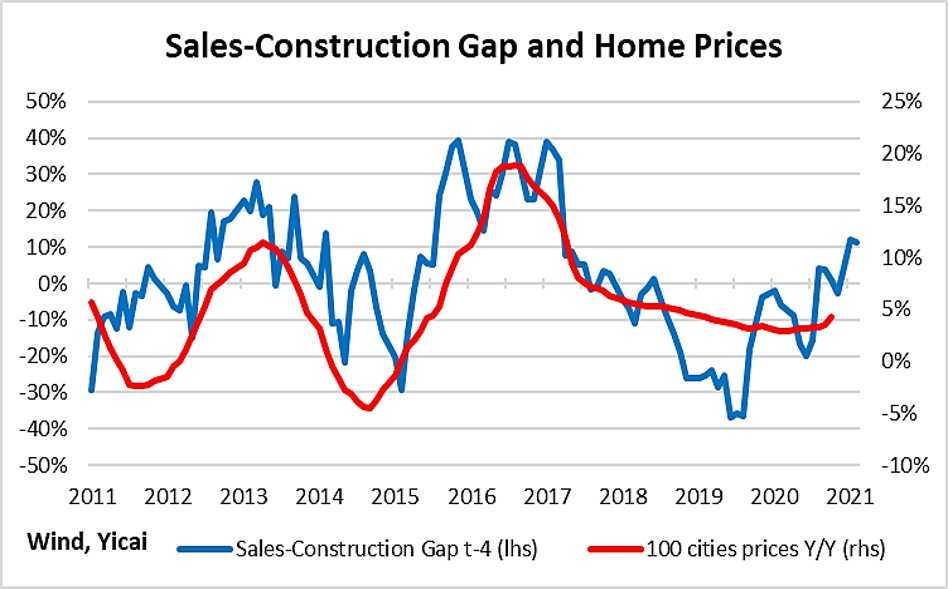 Mark KrugerMark Kruger is Yicai Global's Opinion Editor and Senior fellow to the Yicai Research Institute. He is also a Senior Fellow at both the University of Alberta's China Institute and the Centre for International Governance Innovation. Mark was formerly a Senior Policy Director in the Bank of Canada's International Department, a Senior Advisor to the Canadian Executive Director at the International Monetary Fund and head of the Economic and Financial Section in the Canadian Embassy in Beijing.
China’s Economy: The View From the IMF How Sustainable is China’s Debt? How Fast Will China’s Economy Grow in 2021?