We live in an 18-story apartment building with 4 units on each floor. About 200 of us live in the building. We take Covid tests almost every day. Sometimes public health officials administer the tests. Sometimes we test ourselves.

Although nothing had been officially reported, we had long expected that some of our neighbours had tested positive because a small paper sign saying “Sealed” had been seen on the doors of their apartments.

Yesterday, our suspicions were confirmed when a 70-year-old woman from the second floor and a 50-year-old man from the eighth floor were taken away to quarantine facilities. Their family members did not test positive and will be housed separately in designated hotels for “close contacts”.

But it’s bad news for the rest of us too. The regulations stipulate that having found positive cases in our building; we will be essentially unable to set foot out of our apartments until April 20. That will bring our life under lockdown to almost a month.

Despite a rigorous program of testing for infection, confining confirmed cases and tracing contacts, the virus continues to spread rapidly in Shanghai. More than 26,000 new infections were recorded on April 10, up from 9,000 a week earlier. Ninety-six percent of these cases were asymptomatic and would have gone undetected if not for the testing.

Shanghai’s cumulative infection rate since March 1– 870 per 100,000 people – is more than double Wuhan’s during the first 41 days of the outbreak in 2020 (Figure 1). The rapid spread of the virus in Shanghai is a testament to the highly infectious nature of the Omicron variant. It does not mean that the unfortunately-named “zero-Covid” approach is failing. Indeed, the cumulative infection rate per 100,000 people was about 6,000 in the US and the EU during January when Omicron hit. That’s more than 7 times higher than what Shanghai is reporting. 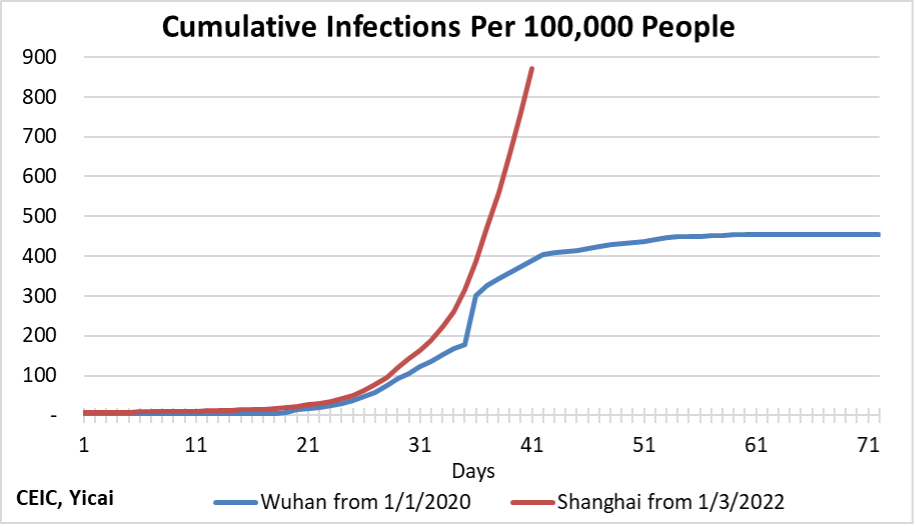 China has also been successful in preventing the virus from spreading across the country (Figure 2). During this wave, the main areas of infection have been in Shanghai and Jilin Province, in China’s northeast. In the rest of the country, home to some 1,350 million people, there are around 650 new infections per day. My native Canada, with a population of 38 million, is reporting close to 6,300 new cases each day. 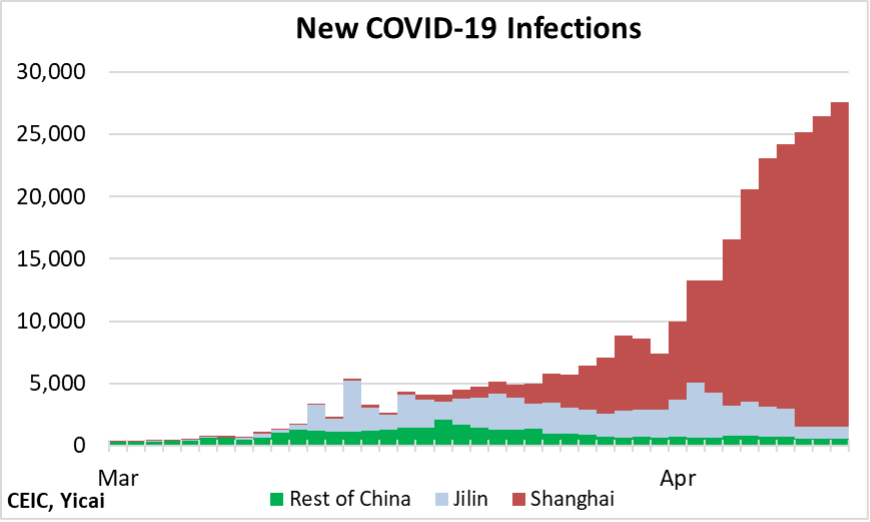 While China’s approach has been successful, it has also been costly.

The Purchasing Managers’ Indices (PMIs) published by the National Bureau of Statistics dropped sharply in March (Figure 3).  This reflects the pandemic-control efforts in Jilin and Shanghai as well as the lockdown in Shenzhen. March’s readings are similar to those recorded in August-September when the economy was hit by a shortage of microchips and a spate of infections in Nanjing. 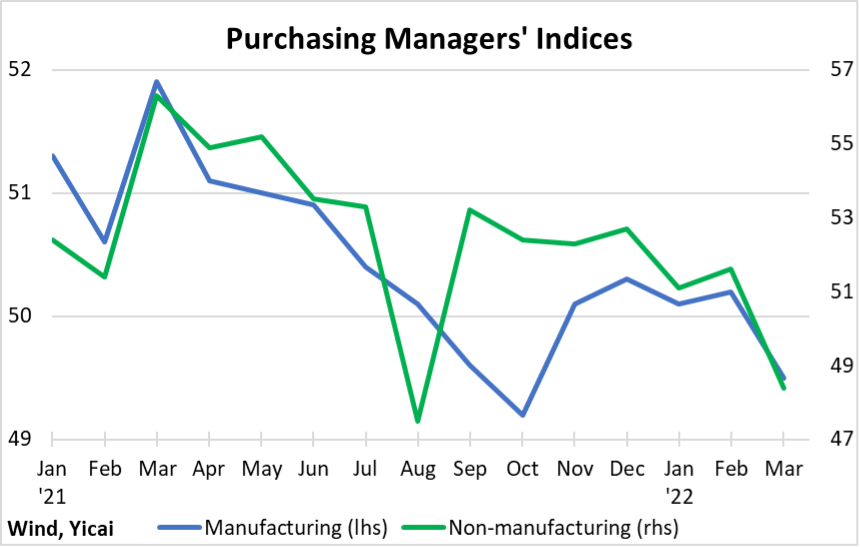 Based on the pre-pandemic relationship between the PMIs and GDP growth, we estimate that the economy grew by 1.2 percent, quarter-over-quarter, in Q1 (Figure 4). That would translate into 4.9 percent growth year-over-year, which would be an improvement on the 4.0 percent recorded in the fourth quarter of 2021.

March’s weakness will certainly bleed into April. However, this does not mean that the government’s 5.5 percent growth target is out of reach. Growth of 1.4 percent per quarter is needed to get 5.5 percent for the year as a whole. It would be entirely possible to make up Q1’s 0.2 percent shortfall and April’s poor outturn if the economy snaps back quickly.

Having been locked down for several weeks now, I can attest that there is a human cost to the “zero Covid” policy that is not reflected in GDP. Because I am unable to go outside, I have become something of a grumpy couch potato. Still, I count myself among the lucky ones.

China has a very advanced online purchasing culture. But logistics have broken down in Shanghai and it is proving difficult to get goods delivered. The problem appears to be transportation – getting goods into the warehouses and then distributing them to the locked-down communities.

With many of the major retailers unable to guarantee delivery, people have turned to informal means to obtain the things they need. Our building has organized many buying groups – for meat, vegetables, fruit, etc. The groups are based on someone who knows someone who can source the needed goods. The more networked you are, the greater the chance that you will have a valuable connection.

My wife, Feifei, grew up here and she is in touch with her classmates from elementary school, high school and university as well as colleagues from work and the parents of our two daughters. She participates in 30-odd chat groups and acts as a clearinghouse for information, pointing people to the group that has the items they need or even ordering products for our less tech-savvy neighbours. Many goods can only be ordered in bulk, so Feifei also barters our surplus bananas for our neighbour’s extra orange juice.

Feifei is exceptionally plugged in. At the other end of the spectrum is her 95-year-old grandfather who doesn’t own a computer or a cell phone. By going through his Neighbourhood Committee, Feifei has been able to have him provided with hot, boxed lunches for CNY12 (USD2) each weekday and CNY15 on weekends.

While I pine for being allowed outside again, Feifei is in her element. In fact, helping friends and neighbours gives her a sense of agency that energizes her and helps her make it through the lockdown. Indeed, the lockdown is bringing out the best in many people and we hear of many acts of kindness.

Of course, being stuck in our apartment is tough on my 10- and 5-year old daughters.

When they express their frustration about not being able to go outside, I tell them that by staying inside, they prevent the virus from spreading and help keep people healthy.

So far, Shanghai has not recorded a Covid-related death. But more than 100 Shanghainese would be dying from Covid each day if the city had the same Covid death rate as the US and the EU did during the first three months of the year. And daily deaths in Shanghai would have tripled if it had the same death rate from Covid as Hong Kong did in March (Figure 5).

“You’re saving lives,” I tell the girls. “You are heroes!” 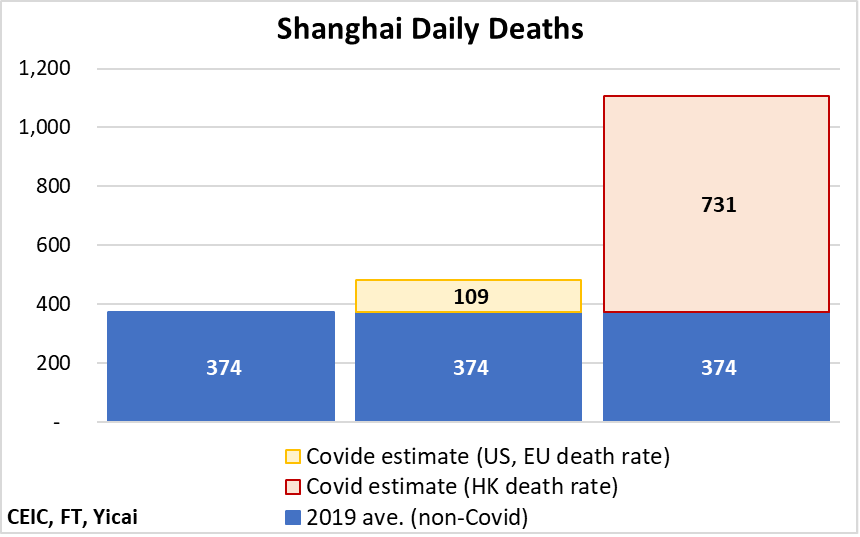