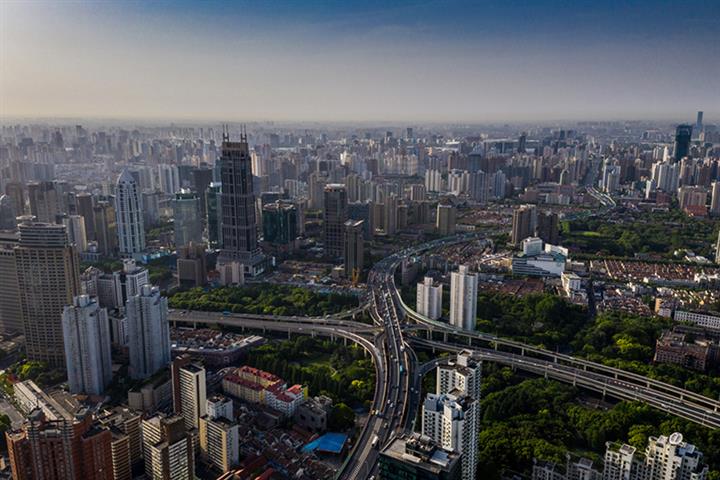 (Yicai Global) April 21 -- The new wave of Covid-19 outbreaks is another setback to China’s real estate sector, already at a low ebb. It is suggested that the government should extend the timeline of the deleveraging cycle without changing the aim of the policy to give the industry more time to recover from the pandemic.

In August 2020, the People’s Bank of China and the Ministry of Housing and Urban-Rural Development set new financing rules for developers to mitigate risks as the pace of borrowing reached record heights.

The loan concentration ratio to a single enterprise was also set at a maximum of 15 percent of the bank’s net capital, and that to an individual at not more than 10 percent.

But in light of the current circumstances, regulators can still consider providing loans to developers that fail to meet the “three red lines” on the condition that their situation does not worsen in the next six months. And to give banks an extra six months to a year to meet the loan concentration ratio.

The predominant risk in the real estate sector is the combined impact of high leverage and the pandemic. Some developers were so cash-strapped at the end of last year that they had no choice but to slow down construction or even abandon projects. The new wave of the pandemic is likely to exacerbate the same risks, which will further hammer consumer confidence and property sales.

Already the damage done by the latest outbreaks is being reflected in the data. Sales of residential properties suffered the biggest decline last month since July last year, and funding secured by real estate firms plunged nearly 20 percent from a year ago, according to statistics from the National Bureau of Statistics. The data for March does not yet reflect the impact of the strict and prolonged lockdowns in Shanghai and Guangzhou.

Real estate firms and residents have been shifting their focus to areas of high demand, or ‘hot spot’ cities, since September last year. The population flow to these places is hard to reverse, but focusing on the demand side only is likely to lead to long-term hidden risks.

Local governments are easing their curbs on the property market, but ‘hot spot’ cities must be prudent about relaxing their policies and stay alert for a sudden rapid overheating of the market such as after the 2020 outbreak.

Some developers may find it difficult to continue their projects, so the government can consider encouraging other firms with stable operations, sound growth and light debt burdens to acquire these projects and help resolve the risk.

Many urban development investment companies have been buying land use rights since the second half of last year, so it is suggested that these firms seize the opportunity to build affordable housing for local governments.

(The author is a professor at China Europe International Business School)