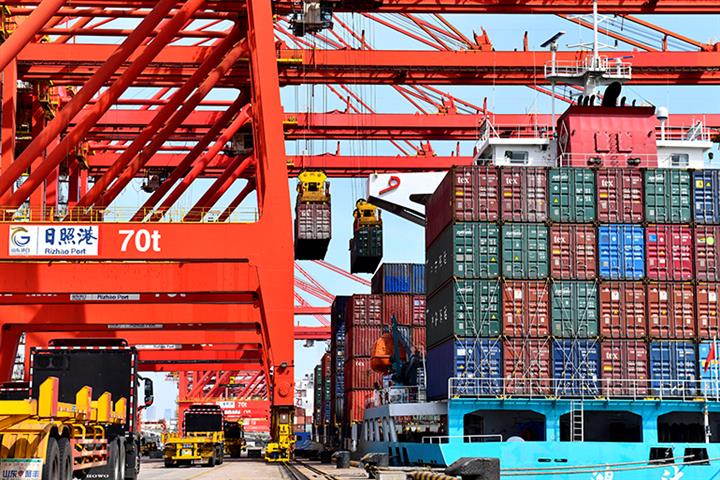 (Yicai Global) Oct. 24 -- Despite adverse factors such as the pandemic and drought, China’s economy continues to recover and improve. In the third quarter, gross domestic product rose 3.9 percent, up from 0.4 percent in the second quarter.

At present, macro policies are starting to work and are boosting infrastructure investment, which has become an important support for the recovery. The foundation for economic stabilization and development is being consolidated, industrial production is improving, manufacturing investment is constantly at a high growth rate, and foreign trade is still resilient.

Since August, several indicators have shown that the Chinese economy has improved, and last month it developed better. The first indicator was that industrial production is improving. In September, industrial output rose 6.3 percent from a year ago, jumping 2.1 percentage points over August.

Manufacturing industry has returned to the expansion range, and the purchasing managers’ index for large, medium and small producers rebounded comprehensively in September at 51.1 percent, 49.7 percent and 48.3, percent respectively, climbing 0.6 point, 0.8 point, and 0.7 point from the previous month.

The advantages of China’s industrial and supply chains continue to be attractive in the current international environment, and foreign trade has been resilient. The trade surplus in the first three quarters expanded by 51.6 percent over the same period last year. In the third quarter, net exports contributed 27.4 percent to economic growth, increasing GDP growth by 1.1 points.

At the same time, market expectations are starting to improve, which is reflected in many ways. For example, the real estate financing environment is getting better, and financial support for the real economy has strengthened. Better business expectations will boost investment and employment, and rising incomes and job expectations are conducive to growth in consumption.

The large increase in entrusted loans and social financing for enterprises is related to the increase in infrastructure investment. More than CNY1.5 trillion of infrastructure projects got underway last month, some with total investment of more than CNY30 billion (USD4.14 billion), including highway, water conservancy, municipal administration, industrial park and port projects.

The central and local governments have recently issued tax and interest rate policies to help the real estate market, and developers have been taking action to save themselves, which will improve market expectations.

Residents’ income and employment expectancy have both improved, according to a survey of depositors in the third quarter by the central bank. The income confidence index was 46.5 percent in the third quarter, up 0.8 point from the previous quarter. The employment expectancy index rose 0.8 point from the second quarter to 45.3 percent. The percentage of residents willing to invest jumped to 19.1 percent, up 1.2 points from the prior quarter.

(Sheng Songcheng is a professor at the China Europe International Business School and former head of the Financial Survey and Statistics Department at the People’s Bank of China. Long Yu is a researcher at the CEIBS Lujiazui Institute of International Finance.)