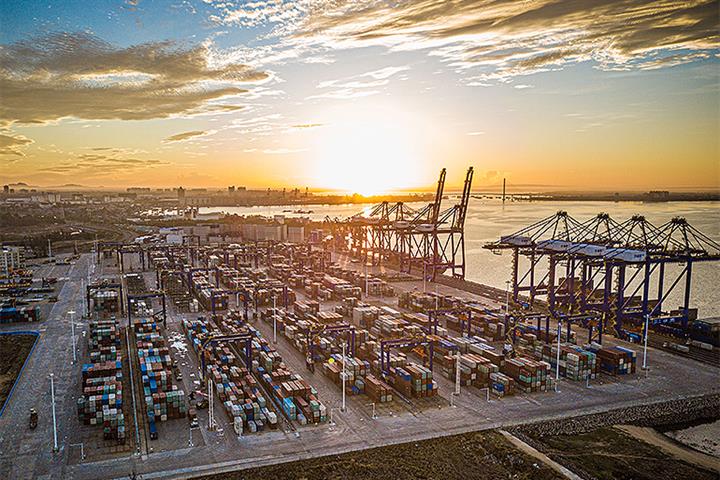 (Yicai Global) Jan. 12 -- Foreign ministers from four Gulf states of Saudi Arabia, Kuwait, Oman and Bahrain and the secretary-general of the Gulf Cooperation Council (GCC) arrived in Beijing on Monday for a five-day visit. Described by some sources as “historically unprecedented”, analysts have interpreted the delegation as a “positive push” to negotiations over the China-GCC Free Trade Agreement (FTA), a proposed deal where talks started as early as 2004 but have failed to make serious progress. The visit is just one of many across what has been a flurry of diplomatic activity from China in the first 10 days of 2022.

Considering the geopolitical context, it is likely that Beijing is aspiring to push through completion of the deal in the immediate future, which may become of the biggest stories of this year. With China’s recent strategy having to secure and finalize as many free trade and economic deals as possible in wake of US pressure, which has included the RCEP, an application to join the CPTPP and an “agreement in principle” of the CAI with Europe, China is now eyeing the gulf states as a political priority, a set of countries who constitute important economic partners to China and have been politically cordial despite their longstanding relationship with the US.

Why do the Gulf States Matter? First of all, and most obviously, the Gulf States collectively constitute the world’s largest exporters of energy, predominantly crude oil and petroleum but also liquid natural gas, which are critical to China’s own development and ever-growing needs. In 2019, Saudi Arabia alone exported USD45.8 billion to China, a total which overshadowed every other country and four times that of the United States. 77% of that total alone constituted crude petroleum, with the smaller proportion constituting other chemical and hydrocarbon related substances.

Because the Gulf States have built their economies around this energy export model and are not in turn, industrial or manufacturing nations, this has created a very favourable balance of trade for them and as a result political priorities in securing free trade agreements have been initially low, even when highly reliant on imports. However, as the world begins to pivot towards renewable energy and envision a future away from fossil fuels, the gulf states have begun to diversify their economic outlook and reinvent their economies with large scale investment programs. Saudi Arabia for one, has established its famed “sovereign wealth fund” which as it is has already placed considerable stakes in China.

For Beijing, the Gulf States in turn are not just energy providers but constitute important export markets due to their lavish wealth and growing emphasis on high end retail and consumption, a consideration that has grown in political importance due to American economic aggression against it. As a result, the needle has now moved between both parties to now move to secure a free trade agreement. What will it consist of? Because the Gulf States all run surplus energy trade balances towards China, they will be looking to establish greater clout in the Chinese market in terms of services, retail, as well as small end products typical of these countries such as handicrafts and textiles in turn with their own transition strategies.

Given that these states are actively offsetting pressure from the United States over China, such as the UAE’s recent snub of an F-35 deal over American attempts to dump Huawei, the political obstacles to such a deal are minimal, something fortified by the repeated support shown for these countries on matters of national sovereignty at the UN. In this case, it is logical to assume that China will hastily and prudently make the needed concessions in order to clinch the deal as it has been doing with others, and this in theory should make the deal one of China’s biggest strategic clinches of 2022.