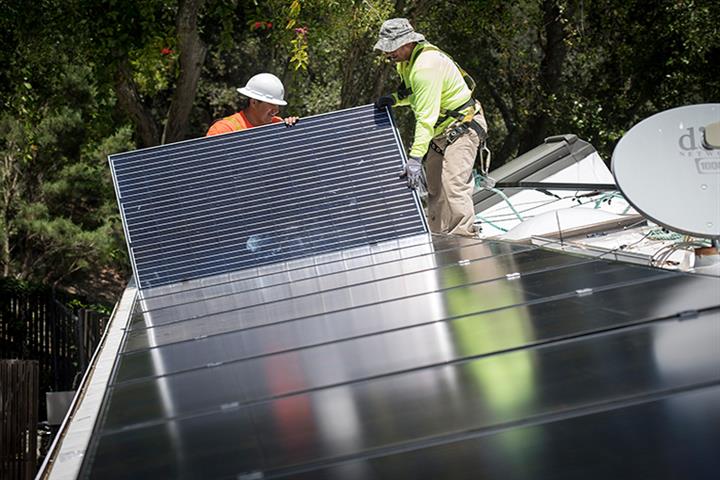 (Yicai Global) June 7 -- Reuters reported yesterday that President Biden is set to declare a 24-month tariff exemption for solar panels from four Southeast Asian nations after an Anti-China investigation froze imports and stalled projects in the United States. Facing levies of up to 250%, the review stalled the import of Solar Panels into the country under the premise they were being manufactured by Chinese companies and shipped to America via a third country. The exemptions come amidst surging inflation in the United States, with the President also utilizing the Defence Production Act in the bid to try and push up local manufacturing.

For multiple reasons, the announcement demonstrates the failure of Biden’s Anti-China solar panel policies which sought to weaponize accusations of false labour in the view of advancing economic protectionist goals. Upon taking office in early 2021, the Biden administration had made fighting climate change a core policy priority. However, in conjunction with its anti-China goals, the Presidency decided that whilst boosting domestic investment in solar panels and renewable energy, it did not want Beijing to benefit, being the largest exporter of renewable energy products in the world.

As a result, beginning last year the administration purposefully weaponized unsubstantiated claims of “Xinjiang forced labor” in the bid to smear and target China’s Solar Panel industry in a bid to try and increase American competitiveness. This was utilized through studies sponsored by the US government through a consulting firm known as “Horizons Advisory” which were then laundered to the mainstream media. Upon doing this, the administration proceeded to blacklist a number of Chinese Solar Panel firms and the import of crucial polysilicon materials, claiming they were linked to forced labor. It also then signed a ban on the import of all goods from Xinjiang.

The White House Press Secretary also spoke of the need for “onshore” and “third shore” what it deemed critical supply chains. Whilst doing this, it then also targeted Solar Panels from four Southeast Asian countries on the premise they were produced by Chinese companies and then being used to avoid all the respective measures. The belief was that by doing so, American companies would take up the market share. However, as with most of Biden’s economic policies and the trade war against China as a whole, this bid to try and cut China out of the Solar Panel Supply Chain at America’s gain catastrophically backfired and contributed to the burgeoning rate of inflation the US which the President has since tried to spin as “Putin’s price hike”.

Predictably, severely reducing the supply of solar panels has only led to a surge in prices which have also in conjunction undermined Biden’s climate goals too. The reality is that China’s scale of supply, as well as global demand surging on an issue he prioritized, simply cannot be ignored or removed from the equation. As a result, the President has been forced to concede on the four Southeast Asia countries (Thailand, Cambodia, Malaysia, and Vietnam) in which Chinese companies hold manufacturing capacity. In other words, the “back door” channel is here to stay and the US attempt to remove China, which holds 60% of the market share, has ended in failure.

The invocation of the defense production act to make solar panels at home will not be a gamechanger, just like it was not concerning medical supplies during the peak of the covid-19 pandemic, wherein the US also relied on China. Effectively, this only serves to remind us that American trade policies are simply not based on reality. In a globalized economy, it is simply untenable for the United States, as a high income and consumer economy, to attempt to turn back the clock and “force” itself towards being a comprehensive manufacturer again. It is not affordable or sustainable, and this is precisely why so many policies aimed at targeting China with the view of procuring advantages for American industry have been wholesale unsuccessful.

The US economy is in multiple areas, severely damaging itself through protectionist and geopolitically motivated anti-China economic policies which pretend that the simple realities of China’s bigger capacity, workforce, affordability, and central position as the nexus of global demand are instead a coordinated conspiracy to undermine the USA through so-called “unfair economic practices”. This has left the country with a White House that is incapable of making sensible, pragmatic, and economically reasonable economic policies, and the results are damning.