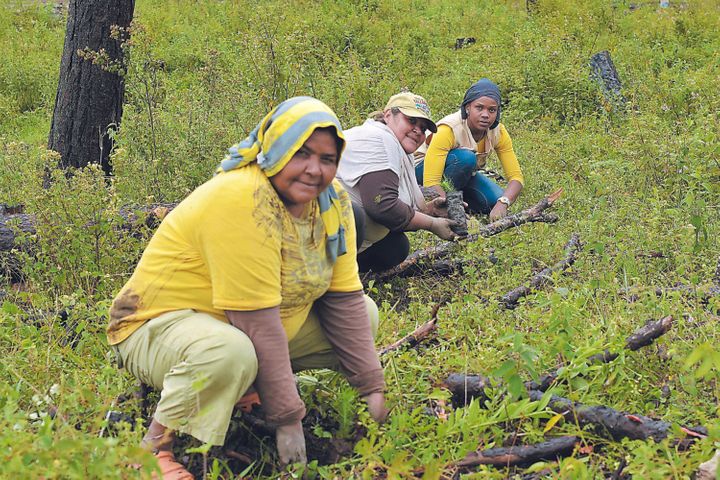 A Sweet Way to Take Care of the Environment

Dozens of families in the municipality of Cantarranas, Honduras, are producing traditional panela in an artisanal mill without cutting down a single tree.

It is hard to resist the flavor of this Honduran ingredient that sweetens and seduces the most demanding of palates. Panela, or unrefined whole cane sugar, is a traditional ingredient in Honduran gastronomy and one of the main sources of income for dozens of families in the municipality of Cantarranas, south of the Francisco Morazán department.

Its artisanal production is part of the local heritage, transmitted through generations. It is now in the hands of a group of families who make up an agroforestry cooperative called Chabosuji. They have been making the sweetener without cutting down a single tree, minimizing the release of carbon dioxide and fine particles into the air.

Chabosuji operates with the support of the Climate Change Adaptation Programme in the Forest Sector (CLIFOR), with funding from the European Union and the German government. The program is run by the Institute of Forest Conservation (ICF) and the German Cooperation (GIZ), and supported by the Mayor of Cantarranas.

The Cantarranas families make panela in a pilot center called trapiche ecológico ("ecological mill"), located in the micro-basin of La Nevada, in one of the municipality's 20 villages. They have installed an innovative system that allows them to cook it using bagasse, or dry cane residue, for the fire rather than wood. This prevents deforestation, particularly in the micro-basin area, where the cooperative has also planted mahogany, cedar and pine trees donated by the ICF.

"The trapiche ecológico initiative shows us how climate, agriculture and forestry can converge. We are extremely happy to see that Chabosuji is creating jobs and producing eco-friendly and sustainable products," said CLIFOR's national coordinator, Mario Martínez.

The process of turning sugarcane into panela begins at harvest season, when the cane reaches maturity. The first step is to extract juice from the sugarcane. The liquid is poured into a container and cooked until all the water evaporates, for a thick honey. As it cools, the honey becomes liquid panela that, once condensed, is poured into a container and mixed to give it consistency and thickness.

People with a preference for natural, chemical-free foods are the product's target market. Hondurans consume panela mainly at Easter, Christmas and New Year, using it to make desserts such as pancakes, honey donuts, or fruit in honey.

The panela production in Cantarranas is already beginning to bear fruit. A local chain of supermarkets selected the Chabosuji cooperative to be one of their suppliers, thanks to CLIFOR's work, which ranges from organizational to technical assistance.

By also producing granulated panela, the agroforestry cooperative is targeting a growing clientele that is not only looking for organic products, but also healthy ones. In contrast to refined sugar, or white sugar, panela retains all the nutrients of sugarcane.

"Due to totally natural processing, this product includes elements such as carbohydrates, vitamins, protein, fat, water, calcium, phosphorus, iron, sodium, potassium and magnesium, so it is healthy and of high nutritional value," said Carlos Ovidio Mejia, president of Chabosuji.

Mejia explained that the CLIFOR program, the ICF and the Municipality of Cantarranas "gave us an opportunity and we decided to take advantage of it. And as an agroforestry cooperative we have demonstrated that we can work ecologically and adapt to climate change."

The ICF authorities are satisfied with the project. "With the trapiche ecológico, we are significantly reducing the amount of firewood normally used in traditional mills, and helping to reduce greenhouse gas emissions that cause global warming," said Manuel Alvarado, the ICF's regional manager. The project is also helping to reducing air pollution, which causes cardiovascular and respiratory diseases.

The picturesque municipality, filled with murals painted by dozens of national artists, turned to sugarcane after years as an agricultural and cattle zone, according to the municipal councilman Marco Guzmán. Cantarranas receives more than 10,000 visitors a year, attracted by its scenic beauty, its native gastronomy and its sweet panelas.