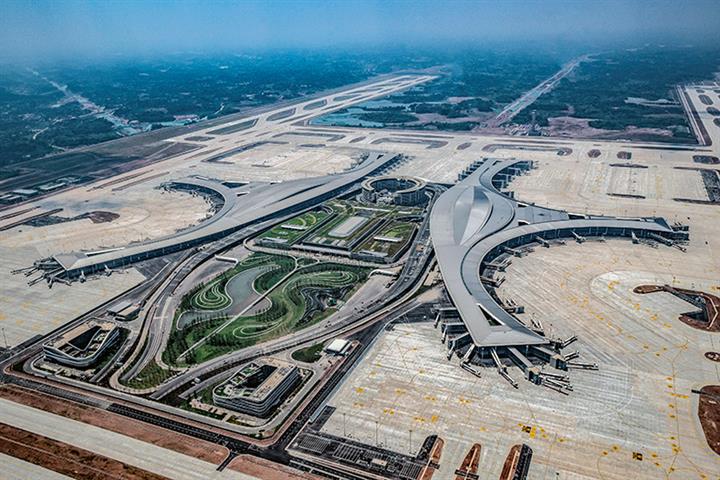 (Yicai Global) July 2 -- Chengdu in southwestern Yunnan province and the nearby Chongqing municipality are planning to form a world-class airport cluster with an annual throughput of 280 million passengers in the next 15 years.

The two airports are already making great strides to achieve this goal. Chengdu opened its second airport last month, making it only the third city in China after Shanghai and Beijing to operate two international airports. Meanwhile, Chongqing has started the tender process for designs for a new airport that can handle 40 million passengers a year.

A number of government agencies, including macro-economic planner the National Development and Reform Commission, put forward a document on promoting the construction of a world-class aviation hub in the Chengdu and Chongqing area on June 21. It includes finishing the Chengdu Tianfu International Airport, expanding the Chongqing Jiangbei International Airport, planning Chongqing's new airport and building additional airports in the cities of Ya'an and Neijing.

The new Chengdu Tianfu International airport, which has three runways and two terminals and can handle 120 million passengers a year, was designated by the People's Government of Sichuan Province and the CAAC as Chengdu’s main aviation hub in the 2019 blueprint, while the older Chengdu Shuangliu International Airport is a regional aviation hub.

The Shuangliu airport already handled more passengers than Shenzhen’s main airport and more cargo than Shanghai’s Hongqiao International Airport back in 2011. Its passenger throughput peaked in 2019 with almost 60 million people, exceeding its design capacity of 50 million, and ranking the fourth busiest airport in China.

Chongqing, which is situated 250 kilometers from Chengdu, is also seeing strong growth in air traffic. In 2019, the Jiangbei International Airport ranked ninth in China with a passenger throughput of 44.8 million. Last year, it rose to fifth place though passenger numbers fell to 35 million due to the Covid-19 pandemic.