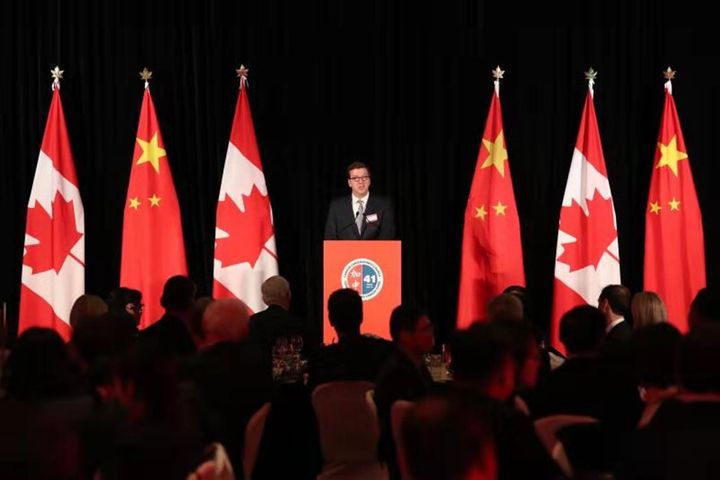 (Yicai Global) Nov. 15 -- Canada greatly values its partnership with China in business and trade and wishes to further develop it, said Stephen McNeil, premier of Nova Scotia province, at a recent business gathering between the two countries.

We hope that the issues between our two nations can be resolved as soon as possible and that together we can build a beneficial and longlasting friendship, he added. He was referring to diplomatic tensions that arose at the end of last year over the arrest of a senior Huawei Technologies executive in Vancouver.

The forum looked at business and commercial developments in both nations from different angles. It took into account changes occurring in Canada's investment environment, areas of growth in bilateral trade, rising consumption in China and investment and business management in the Yangtze River Delta Region.

USD71.1 billion of tentative deals were recently signed at the China International Import Expo in Shanghai, demonstrating the country's commitment to further opening up its market, Shanghai Vice Mayor Xu Kunlin said. Canadian companies brought many high-quality products and services to the CIIE and Shanghai, as China's biggest economic hub, will always remain open to them, he added.

China is a significant trading partner of Canada and promoting the resumption of normalized relations between these two countries is the duty of everyone here today, said Stewart Beck, president and chief executive of the Asia Pacific Foundation of Canada.

In the wake of the diplomatic spat, Canadian exports to China dropped by 9 percent in the first nine months of this year from a year earlier to CAD1.5 billion (USD1.1 billion), according to APF statistics. This goes against the trend. Since 2014, exports had been growing at an annual average rate of over 20 percent. The value of the North American country's exports to China last year was CAD8 billion (USD6 billion) more than in 2014.

Next year will be the 50th anniversary of the establishment of diplomatic relations between Canada and China, said Dominic Barton, the newly-appointed Canadian ambassador to China. I hope that the two nations can resolve their differences and strengthen their partnership, he said. A normalized bilateral relationship will benefit the economies, trade and cultures of both countries. It is also in compliance with both Canadian and Chinese citizens' interests and expectations, he added.

China has resumed imports of pork and beef from Canada, said Dr. Huang Zhong, researcher at the Center for Canadian Studies at the Guangdong University of Foreign Studies. The future of the pair's relationship depends on whether Canada can adopt further pragmatic measures to push the relationship back onto a normal track or not.

The CCBC established its representative office in Shanghai in 1995 and it has been serving as an important bridge for the two countries' partnership in commercial and trading sectors since then.