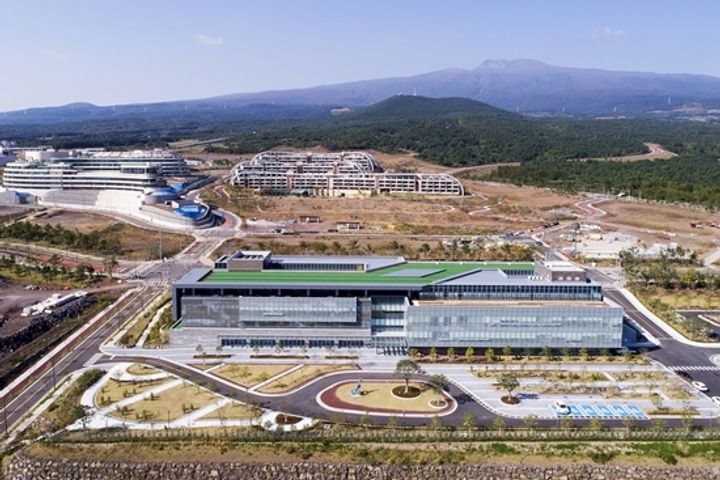 (Yicai Global) Dec. 7 -- The provincial government of Jeju island in South Korea has issued its first hospital license for a foreign-backed for-profit firm to Chinese real estate developer Greenland Holdings, but the clinic will not be available to locals.

Greenland built the wholly owned hospital in its 'Healthcare Town' project in Seogwipo, the Jeju Special Self-Governing Provincial Government said in a statement on Dec. 5. It covers around 18,000 square meters, has 48 beds and plans to have 134 staff, including 58 medical personnel, when it opens next year, the statement added.

But the government will be placing tight restrictions on the clinic, limiting it to having only four departments: cosmetic surgery, dermatology, internal medicine and family medicine. It will be inaccessible to Korean citizens and ineligible for the national health insurance or other subsidies.

The constraints are to protect the foreign investment and to meet concerns about foreign-backed for-profit hospitals, a worker at the provincial government's medical policy division surnamed Kim, who chose not to share his name or job title, told Yicai Global.

South Korea used to prohibit foreign firms from opening for-profit clinics in order to protect market order, according to the country's Medical Service Act. But a special act introduced in December 2002 opened up the market to allow overseas companies to hold shares in, or wholly own, medical institutions that are only accessible to foreigners.

The change failed to spark interest among foreign investors, with zero applying to build hospitals, so at the end of 2004 the government amended the rule to allow foreign-backed for-profit institutions to target Korean citizens. It made Jeju a special autonomous region where foreign investors could open hospitals with local approval in 2006.

Greenland and the Jeju government penned a memorandum of understanding in July 2012 to build the Healthcare Town project, one of six core development schemes on the island. Greenland pumped CNY6 billion (USD870 million) into the venture to create a world-class living community combining residential, recreational and medical functions, according to the firm's website.

The Chinese developer put forward plans to build a medical institutions in August last year, but opposition from the local sector led to multiple hearings that delayed approval for the hospital. South Korea's biggest news agency, Yonhap, conducted a poll that showed there was an equal split among citizens for and against the project, and it became the focal point of political discussions.

Jeju offers citizenship through real estate purchases since 2010, and has become a hotspot for Chinese buyers in recent years. It is also a popular area for Chinese companies to invest in property, though some China-backed projects on the island have run into trouble with the locals.

Jeju's Public Opinion Investigation Committee proposed that the local government reject Greenland's bid to build a hospital over concerns for damage to public healthcare in October this year.

Kim has visited Greenland's hospital and found that it targets wealthy tourists. It does not match the medical needs of locals, he believes, so said proposals to make it a public hospital are unrealistic.

The firm has employed 107 locals so is contributing to the Jeju economy -- authorities need to consider them, as well as policies, trust between China and South Korea, and the compensation they may need to dish out if they cancel the project in a hurry, Kim added.

Jeju will protect the rights of compliant overseas investors and is committed to providing assistance and protection for foreign companies doing business in Korea, he said.

The result is a compromise made through different levels of thinking and reflects the range of risks that investors make when heading overseas, Lee Kook-heon, a professor at Korea University's College of Political Science and Economics, told Yicai Global.

The government should not make frequent policy changes nor violate the basic principles of a policy if it wants to create a healthy investment environment, added Kim. Foreign investors also need to be thoughtful when preparing for investments, as previous commitments could be withdrawn -- under any government, he said, adding that events like this test the political wisdom of authorities.