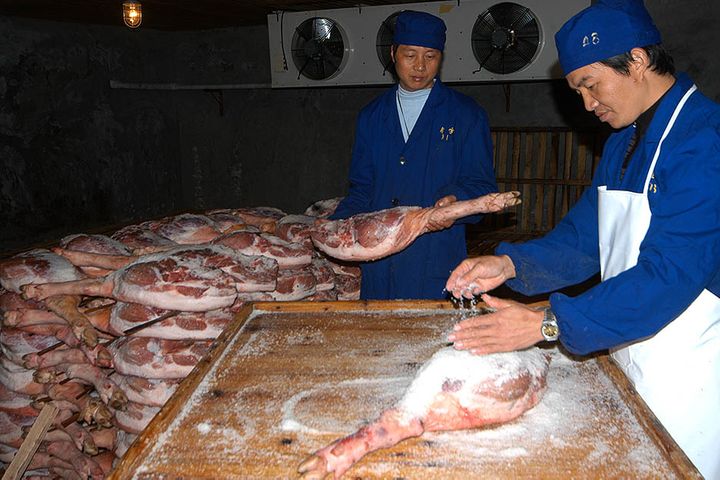 (Yicai Global) Jan. 7 -- Jinzi Ham yesterday rebuffed suggestions its use of a popular online influencer dubbed China's 'Number 1 Lipstick Bro' to sell its ham on Jan. 5 was a dodge to manipulate its stock price.

The company's shares [SHE:002515] hit the 10 percent limit up under bourse rules the following day, with a CNY548 million (USD79 million) gain in market value.

This promotional model had already previously caused the Shenzhen Stock Exchange to bristle. It demanded on Jan. 3 that Zhejiang province-based Jinzi Ham explain its cooperation with such influencers on online e-commerce platform Taobao and others after it had noticed the company's response to investors praising the practice on the bourse's interactive platform the day before, National Business Daily reported Jan. 5.

It directed the pork retailer to provide evidence of regular partnerships with these touts and asked whether their endorsements aimed to divert traffic to stock-trading 'hot spots' and sought to pump up the company's share price for quick sale at a high profit.

Influencers direct sales or traffic to the company's brand and products through livestreaming, short videos and other media forms, and Jinzi Ham pays them promotional fees and sales commissions, the company said in its reply. It mainly collaborates with these stars on the Taobao, Kuaishou and Douyin platforms and its sales strategy of partnering with such livestream celebrities contributes little to its overall performance, Jinzi Ham said in its reply.

The company has been involved in livestreaming since 2018 and teamed up with web celebs 71 times last year, it added.

The firm's share price at one point jumped 8.55 percent to close up 2.58 percent at CNY6.36 yesterday but opened down 3.14 percent at CNY6.17 today as rationality returned.