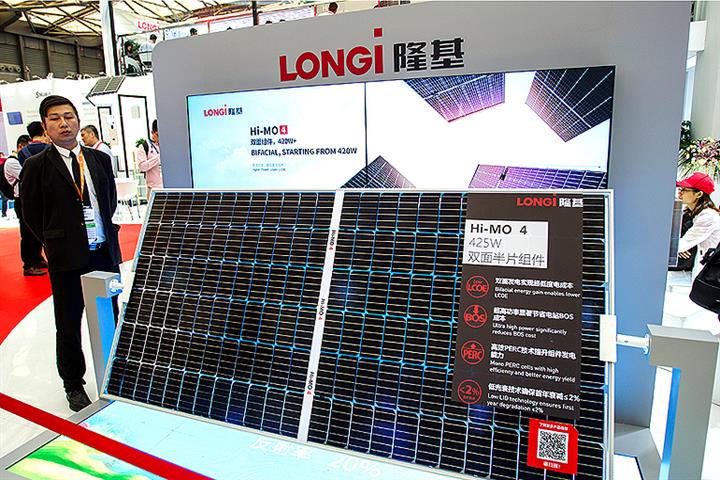 (Yicai Global) Dec. 21 -- Shares of Longi Green Energy Technology surged to a historic high after the Chinese solar power equipment maker said that Hillhouse Capital Management, which has recently invested in the soaring JD Health and Nio, will spend CNY15.8 billion (USD2.4 billion) for a 6 percent stake in it.

Longi's stock price [SHA:601012] jumped by the daily limit of 10 percent to CNY85.42 (USD13) this morning, the highest since the world's biggest monocrystalline silicon supplier went public in April 2012.

Li Chun'an, who is a person acting in concert with the controlling shareholder, will transfer 226 million shares to the Chinese private equity firm, the Xi'an-based company said in a statement yesterday. The price of CNY70 represents about a 10 percent discount to the closing price on Dec. 18.

Hillhouse Capital has confidence in Longi's sustainable development as it aims to benefit from the latter's stock price movements, the target firm added.

Hillhouse Capital is a household name in the Chinese PE field. The financial institution bought stakes in many emerging tech firms such as Xpeng Motors, Contemporary Amperex Technology, and Snowflake in the third quarter, according to the Beijing-based firm's statement released on Nov. 17.

After the deal, Longi's controlling shareholder will continue to hold the largest stake in the firm at 30.1 percent. That group includes Li Zhenguo, his wife, and Li Chun'an.

Longi makes about half of the world's monocrystalline silicon wafers. But it has lately been expanding to downstream parts of the supply chain such as solar panels, cells, and even solar power plants.