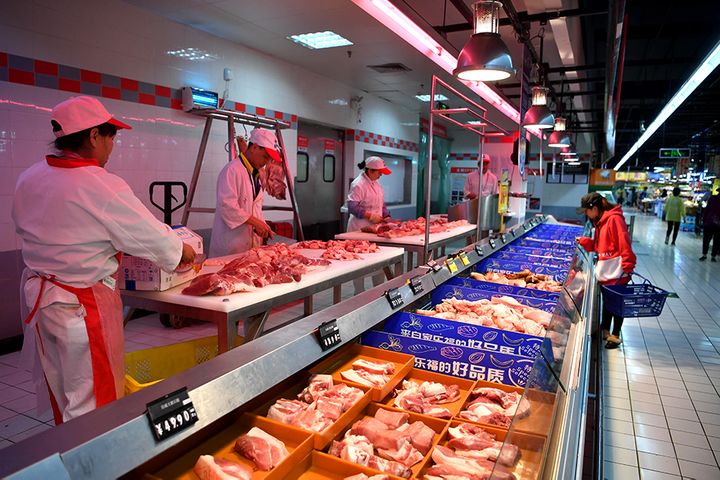 (Yicai Global) Oct. 17 -- China's supply of pigs should return to normal next year, according to an agriculture ministry official, after outbreaks of deadly African swine fever in all mainland provinces, Hong Kong and Hainan island devastated the world's biggest hog herd.

The nation's pig rearing capacity is recovering quickly and livestock numbers expected to bottom out by year end, Yang Zhenhai, director of the ministry's Husbandry and Veterinary Bureau, said at a press conference in Beijing today.

The number of hogs on hand rose 0.6 percent to 44.45 million in September from the previous month, while breeding sows gained 3.7 percent to 6.1 million, according to a ministry survey of farms that slaughter more than 5,000 pigs a year.

Some 157 outbreaks of African swine fever had been reported across China as of yesterday, with over 1.19 million hogs culled. A blockade on affected areas in 28 provinces has been lifted, the ministry said.

But pork supply will remain tight in the short term, said Tang Ke, head of the ministry's Department of Market and Economic Information. Prices are expected to stay high on the eve of the new year and before China's Spring Festival holiday in January.

China's consumer prices rose at the quickest pace in six years last month as soaring pork prices pushed up the cost of living, according to data the National Bureau of Statistics published on Oct. 15.

The consumer price index jumped 3 percent in September from a year earlier. That's the strongest growth since October 2013. It is also the seventh straight month that the CPI has shown a reading above 2 percent.

Pork prices were the single biggest contributor to the gain. The cost of the meat soared over 69 percent from the same period last year, contributing 1.65 percentage points to the CPI's increase, the NBS said.