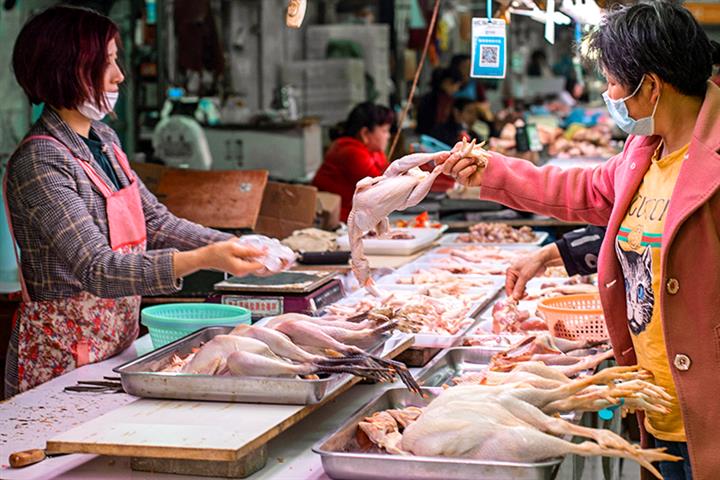 (Yicai Global) May 27 -- Pork prices in China have been falling since the Spring Festival in February, partly because production capacity has risen, but also because consumers are increasingly eating more poultry, beef and mutton instead, a trend that is expected to continue, according to industry experts.

There has been a clear trend of increasing poultry consumption and declining pork consumption since 2015, Wang Zhong, chief consultant at Systematic, Strategic and Soft Consulting, told Yicai Global. That has became more pronounced since the African swine fever outbreak in 2018, he added.

Yicai Global compared two sets of annual data released by the National Bureau of Statistics in 2017 and 2020 and found that pork’s share in the total of pork, beef, mutton and poultry produced shrank to 53.8 percent from 63.3 percent, while poultry rose to 30.9 percent from 22.5 percent.

Annual pork demand is likely to stagnate at 50 million to 52 million tons in the future, and is unlikely to return to the peak 56 million tons seen before the outbreak of ASF said Lin Guofa, research director at Bric Agriculture Group. Meanwhile, annual demand for poultry will increase from the current 25 million tons to 28 million tons.

China is the world’s top pork producer and consumer. Domestic pork prices rose after ASF spread through the country in 2018, and the ensuing surge in imports pushed up global prices as well. The high costs of pork has also stimulated global poultry farming.

In terms of feed conversion ratio, chickens are less demanding than pigs. Industry insiders predict that if poultry, especially meat from white feather broilers, can replace 3 million tons of pork, feed demand will fall about 4 million tons, said Zhu Zengyong, a researcher at the Institute of Animal Sciences under the Chinese Academy of Agricultural Sciences.

Another factor is health, according to a research report issued by Haitong Securities earlier this month. Chicken is high in protein and low in fat, calories, and cholesterol, making it more suitable for the elderly and people who want to keep fit, so more consumers are expected to choose it instead of pork, the report said.

The report predicted that China's chicken consumption will reach 25 million tons in in 2030, or 17.51 kilograms per person.