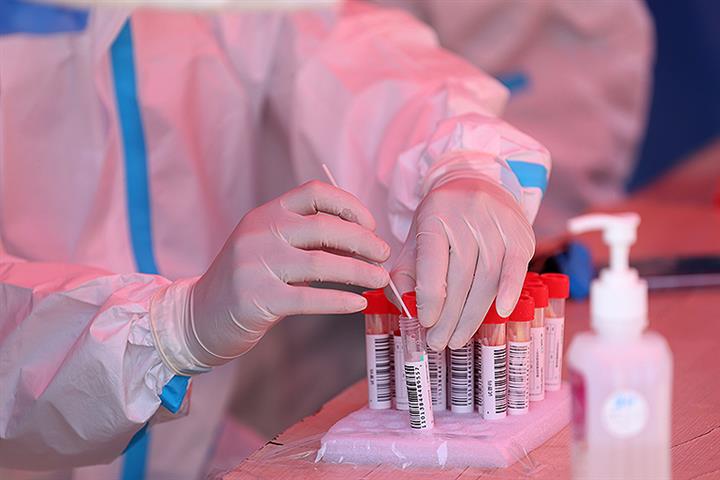 (Yicai Global) July 21 -- The government of Tianjin, a city of 10 million people close to Beijing, has cut the cost of Covid-19 nucleic acid tests for the third time this year, with the tests that are done as part of a combined batch at public medical institutions now costing no more than CNY3 (USD0.40) each.

In May, the National Health Insurance Bureau asked local governments to further reduce the price of nucleic acid tests that are part of a mixed batch to no more than CNY5 each, and for those that are part of government-organized mass screening and regular testing to a maximum of CNY3.50 each. And the price of a single test, that is not part of a batch, is to be capped at CNY16 (USD2.37) per person.

As a result, the price of mixed batch testing has fallen to between CNY3 and CNY4 in major cities such as Shanghai, Shenzhen and Chongqing as well as other parts of China.

The lowest bid to come out so far is from Guangzhou Goodwill Biosciences at CNY2.70 each, according to an announcement made by the Zhongshan government in southern Guangdong province on July 6.

But the tumbling prices are causing many Covid-19 test kit makers to issue profit warnings. Shanghai Kehua Bio-Engineering’s first-half profit could crash as much as 90 percent from the same period last year to CNY35 million (USD5.1 million), the medical device maker said on July 14.

And net profit at Lepu Medical Technology may sink between 20 percent and 30 percent over the period to between CNY1.2 billion (USD180 million) and CNY1.3 billion, the Beijing-based company said the same day. Of this, income from its Covid-19 testing business could dive 80 percent.

There are more than 11,937 labs in China that provide nucleic acid testing services which can process 41.6 million samples a day.