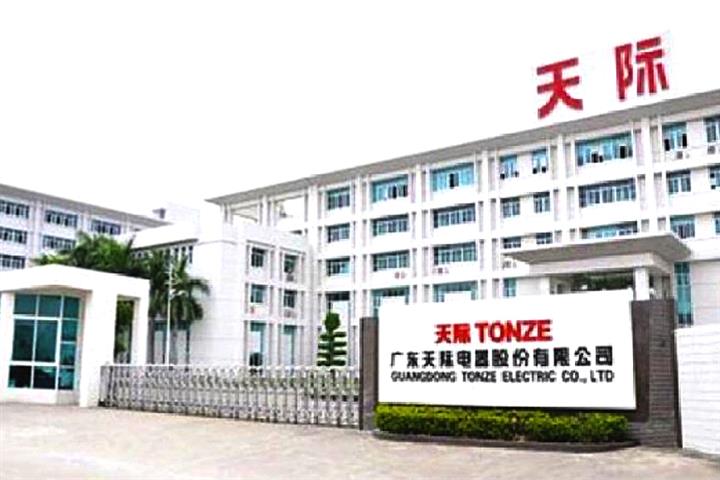 (Yicai Global) Sept. 15 -- Shares of China's Tonze Electric surged after the electronic product maker said its third-quarter net profit may have exceeded the sum it logged in the first half, mainly due to battery material price hikes.

The home appliance manufacturer expects its net profit to tally between CNY240 million and CNY260 million (at least USD37.3 million) in the three months ended September as prices and Tonze's output of electrolyte material lithium hexafluorophosphate grew, the Shantou-based company said in a press release yesterday.

In the first three quarters, net profit should range between CNY440 million and CNY460 million, according to the statement. During the same period a year ago, the company recorded a net loss of CNY43.8 million (USD6.8 million).

Lithium hexafluorophosphate is an essential part of new energy vehicle batteries, making up about 40 percent of the total cost of battery electrolytes. Prices of the inorganic compound have jumped to around CNY450,000 (USD69,835) per ton from about CNY100,000 per ton early this year.

Tonze is increasing its output of the valuable material. The firm said in late August that it intends to invest CNY3 billion (USD465.6 million) with partners to build a new facility with 30,000 tons of lithium hexafluorophosphate. Moreover, an addition of 10,000 tons in annual capacity is underway with trial production expected to kick off by June 2022. Currently, Tonze has a capacity of 8,160 tons of the electrolyte material per year.

Rivals are smelling opportunities too. China's output of lithium hexafluorophosphate more than doubled to 21,320 tons in the first half from a year ago, according to data from Iccsino.Com.