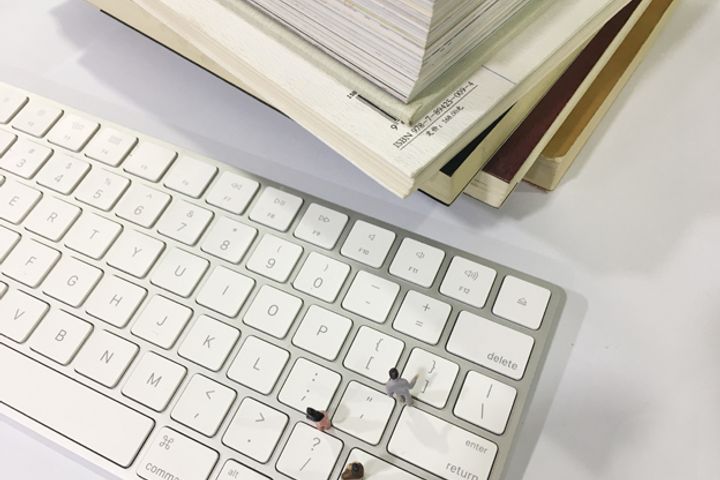 (Yicai Global) Jan. 23 -- Chinese web-writers, also known as e-writers, have jumped on the Big Data bandwagon and amassed considerable wealth from television and film adaptations of their works. Some earn as much as CNY50 million (USD7.8 million) every year, a market insider told Yicai Global.

"Basically, I write in the morning and at night. I relax in the afternoon by cleaning up the garden, jogging or fishing on the beach. I go to meet my friends sometimes," professional web-writer Meng Hu told Yicai Global in a recent interview. His pen name is Jiutu.

The 40-something writer is recognized as the most rewarded author in the world of internet literature. For him, writing has become a hobby. "I'm exploring the possibility of taking my time to craft real masterpieces, instead of writing new episodes and keeping myself busy all the time."

By 'masterpieces' he means writings created based on Big Data. An ideal product should have "great artistic merit that attracts TV series producers and filmmakers," and the resulting business ecosystem can in turn empower the creative writing process. This way, the value of novels published online as intellectual property is enhanced, and authors get rich by earning royalties and other benefits from businesses along the value chain.

Jiutu is one of the pioneers of web-writing in China. He worked at a power engineering company in Beijing as a university graduate in science until he developed a passion for creative writing after the first bulletin board system (BBS) went live in China in the late 1990s.

"In the early years, most web writers and readers were well-educated white-collar workers. They were financially well off and they wrote just for fun," he told our reporter.

Later, internet literature became popular, and paying membership systems were introduced, turning the hobby into a livelihood for them. This is how the online literature industry originated.

The public's changing perception of literature as a form of intellectual property brought radical changes to the web-writing industry. Two of 2013's 10 highest-rated TV series were adapted from internet literature works. Two years later, half of the top-10 TV series were based on novels published online.

The market realized that web-writing was a suitable resource for generating online traffic, and many capital investors jumped onboard. From 2013 to 2015, all leading Chinese internet companies forayed into this emerging industry to seize the best IP resources. Internet literature thus became part of the entertainment industry chain.

Prices of the copyrights to novels published online skyrocketed as a result. The adaptation right for The Adventures of Three Tomb Raiders series sold for about CNY1 million in 2008, but that price soared to CNY100 million last year, a market insider said. Copyright prices for the most popular IP works, known in Chinese as 'head' content, have increased to over CNY50 million. Even works by little-known writers have been priced at several millions of yuan.

Web writers' income has swelled dramatically over the years. Under the traditional business model, paying readers were the main source of income for contracted writers. With the introduction of the new model, however, advertising and film and TV right sales and royalties have led to a leapfrogging in earnings for most web writers.

The average yearly earning of the 10 most popular web writers hit CNY32.3 million in 2016, almost doubling the average income of their offline counterparts, public information shows. As the new model continues to gain traction, the yearly income of top-tier e-writers should reachCNY50 million, and that of authors of phenomenally popular novels may be as high as over CNY100 million.

Some experts argued that the value of the web-writing industry will continue to grow forever. The volume of the 'aftermarket' in the sector is projected to hit CNY836 billion by 2020.

The internet literature market has maintained an average compound annual growth rate of 45 percent from 2013 through 2016, and it will drop modestly to around 31 percent between 2016 and 2020, per the White Paper on Digital Reading in China 2016 published by the State Administration of Press, Publication, Radio, Film and Television in April.

Few other Chinese sectors, including the booming real estate market, have achieved such a high growth rate, so full-industry-chain IP development will become the dominant trend in the future web writer community. Online publishing platforms must learn how to tap into original content through in-depth, long-term and cross-industry collaborations, and abandon the old business model that relies exclusively on one-off IP sales.