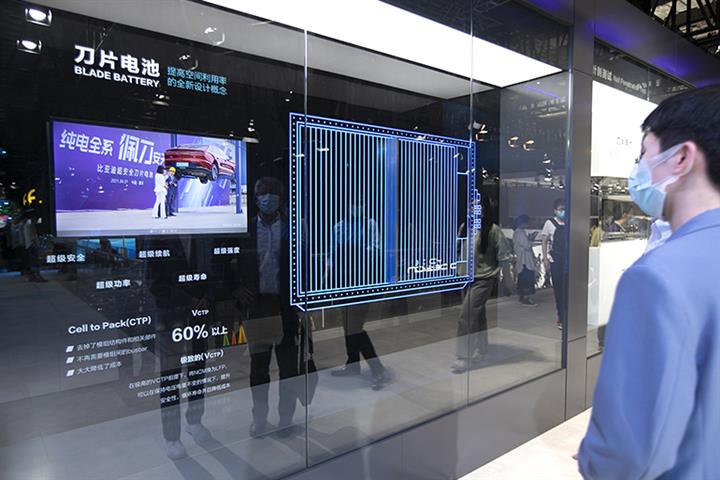 (Yicai Global) July 19 -- BYD has equipped all of its new vehicles with Blade batteries, which it says have advantages over the standard ternary lithium batteries widely used in the industry, the Chinese electric vehicle maker told Yicai Global today.

BYD released the Blade, a new-generation lithium iron phosphate power pack, last March and first used it in its flagship Han model. As of last month, the Shenzhen-based company had sold over 90,000 Han units in a year, with monthly sales sometimes exceeding 10,000.

Lithium iron phosphate batteries are more resistant to low temperatures and are safer and less likely to catch fire than ternary lithium batteries, but they cannot store as much energy and have a shorter lifespan. Ternary lithium batteries have been the main choice among electric automakers so far, with their share of the Chinese market once topping 70 percent.

With its new product, BYD claims to have improved the lifespan of lithium iron phosphate power packs to basically the same level as that of ternary lithium batteries. Another advantage of the Blade is the price.

The key problem with power batteries is the high price, but BYD has cut the cost of the Blade by at least CNY600 (USD92.56) per kilowatt hour, Sun Huajun, deputy general manager of BYD subsidiary Fudi Battery, told the media last year.

Chongqing-based Fudi Lithium Battery, which makes the Blade, has set up eight production lines with total capacity of 20 gigawatt hours since it went into operation in March last year, Yicai Global learned from a BYD source. Its power battery capacity is likely to reach 35 GWh in the future.

Fudi Lithium is a wholly owned subsidiary of Fudi Battery.