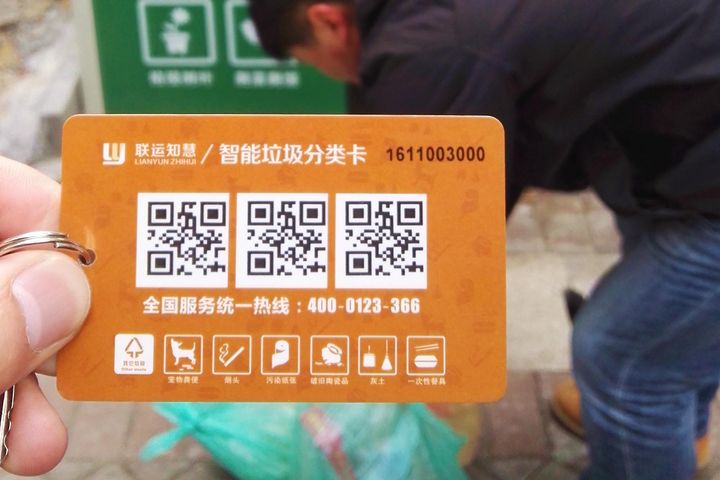 (Yicai Global) Oct. 10 -- To guide residents to shed their ingrained habit of simply discarding garbage, Baohe district in Hefei -- the capital of China's eastern Anhui province -- has adopted a system of awarding accumulated points to give residents a bonus to incentivize them to sort their garbage.

After residents create new accounts for these brownie points, they receive loyalty cards with an exclusive QR code. The accumulated points can be exchanged for goods online, Xinhua News Agency reported.

With recyclable garbage such as metal, glass, cloth, etc., residents first attach the exclusive QR code to it and then place it into the receptacle for recovery of renewable resources, and recycling staff then calculate the accumulated points based on category and amount, and credit the corresponding points to residents' accounts via the QR code. Participants can also get five points for kitchen scraps, with one point equivalent to USD0.0015 (CNY0.01).

The accumulated points can be exchanged for commodities in exchange devices similar to vending machines in residential compounds. Small gifts such as drinks are available in these exchange machines.

Hefei had instituted 23 pilot residential areas, covering more than 30,000 households, recycled a total of 1,780 tons of kitchen garbage and 180 tons of renewable resources, and initially completed the goal of all categories of recycling, clearing away trash generated the same day, and pure sorting of kitchen garbage by the end of September, said Li Dayong, director of public relations with the Hefei city management bureau.